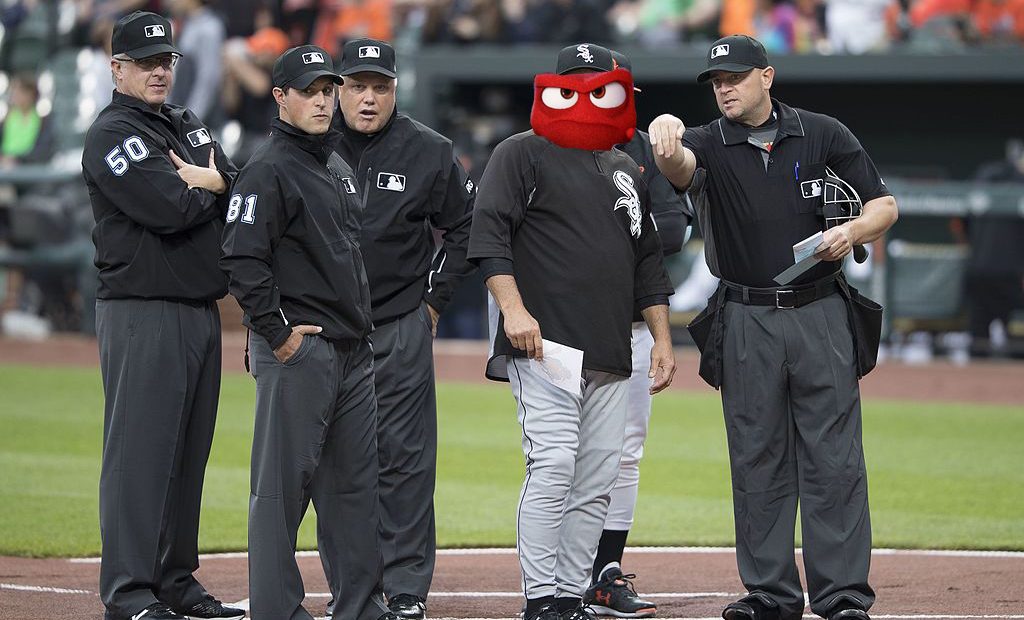 Spring training used to be a time of relief and happiness. Even those of us stuck up in the north, under mud and snow (though not for much longer. Thank you Global Warming!) would gleefully check sports sites and Twitter just for a glimpse of the sunshine and players taking batting practice in it. There would be 743 stories per day about someone being in the best shape of his life (this will be roughly 10 less than the number about Seabrook come September. Prepare now). Soon games will be on TV, and you would have tuned in merely to watch the warmth. You’ll probably soon start swearing at your friends’ photos on FB from Arizona or Florida at some ballpark. This is a Sarah Spain Special (luv u, Sarah. It’s ok, we’re honestly friends. No, seriously, we are!).

These days however, the only thing coming out of every spring training site is a bunch of vitriol, angst, frustration, and veiled threats directed at one team, the Astros, or one man, Rob Manfred.

I want to join in on calling Manfred a total dope. But the thing is, the commissioner of just about every sport is supposed to be a dope. Baseball killed having a real commissioner when they knifed Fay Vincent in the back and installed one of their own as commish. Really, ever since then, the job of a commissioner has been to maximize the owners’ profits and nothing else. And that pretty much has gone from every sport. Pete Rozelle and Paul Tagliabue (arguably) were actual commissioners. They gave way to the Ginger Doofus. David Stern to Adam Silver has been about as close to a clean transition as you can get, and both Silver and Stern have their issues. The NHL has always been run by an idiot, because it’s formed by idiots.

So Manfred is essentially unequipped to deal with this. His job is TV and internet deals and squeezing players for money. Any rule changes we’ve seen is only to cater to TV, or at least it is in their own mind. He doesn’t have any idea how to run the actual game, and whatever he handed down to the Astros is only meant to have the appearance of doing something. He doesn’t have any idea, because it’s not in the job description anymore.

Which sucks, and perhaps this will cause the players to try and change the Commissioner’s job or role in the next CBA. But I doubt it.

And I think we all get it It does feel light that the only people to really pay for this were a manager or the GM. Perhaps in a just world, world class nincompoop Jim Crane would have to give up the team even for just his inattentiveness. But as we discussed when this came down, what are the logistics of suspending the players? You could justify suspending every single one on that 2017 team, either for participating or not speaking up. Look at what’s happening to Man City with UEFA right now (suck it, Hess). But then would the Astros have to play a couple weeks, a month, half a season, the whole thing with their AAA team? Formulate a team from what’s left on the free agent scrapheap? Maybe these are questions they should have had to answer and not have the commissioner do it for them, but here we are.

As far as stripping them of the title or give the rings back…does that really matter? Are the Dodgers going to have a parade now then? Do they get rings? Would they really want them? Do they feel like they “won” now? It feels good to say in the moment, but it doesn’t really do anything. I still remember the Fab Five, perhaps my favorite basketball team of all-time (only other contender were the Glove-Reign Man Era Sonics), going to the Final Four, even if the history books say they didn’t.

Still, it’s hard to believe that every player is blindsided by this. There’s footage of a couple pitchers in 2017 looking quizzically or worse at the Houston dugout in 2017 when they heard the song of the garbage can. Players move on, players talk. Where was the outrage then? Feels like this is all making up for something now.

Maybe it’s the hinting at the buzzers that’s really pissing players off, because that’s perceived as way over the line. As I wrote back when this broke, I don’t think the Astros themselves think this is a huge deal. You can steal signs from second base. You can from the dugout if the catcher drops them too low. You can study a pitcher tipping his pitches. You can see where just stealing them from the centerfield camera would be considered not that far from those, at least by some players. Although if a pitcher catches you stealing signs from second base, your friend at the plate is likely to end up with a Rawlings in his spine. So maybe it’s more of a no-no than I think.

Maybe it’s just because it’s the Astros, whom everyone hated before this anyway. And they are the hilt of new baseball thinking, that they’re the smartest guys in the room and they know better than you. It’s why they can cut huge numbers of staff and scouts because they have a “system” that you can’t conceive of. It’s why they can taunt female reporters about Roberto Osuna because they’re not bogged down by “ethics” or “morals” and happily so.

This is what happens when the business-bred hedge fund bros that have taken over MLB front offices over the past couple decades realize their true form. Because there’s no out of bounds where they come from. Mostly because those in charge are the same as they are and are only going to help them, which is what Rob Manfred is, isn’t he? There are no consequences, and they have too much money to face them anyway. Everything is fair as long as you win.

Perhaps this is where the wave breaks and rolls back. I hope it is, because baseball seems pretty sour these days. I don’t know how much more sour it can get before even more people stop caring, including those like me who used to really care. Baseball may never admit it due to the amount of money still in the game, but it would not be so hard for it to go the way of horse racing and boxing as sports of yore. It should be a time of boom, given the drop in participation in football and those athletes needing to go somewhere. But baseball is unmatched in fucking that up royally.