Escrow Is Just Code For “Imma Get Mine” 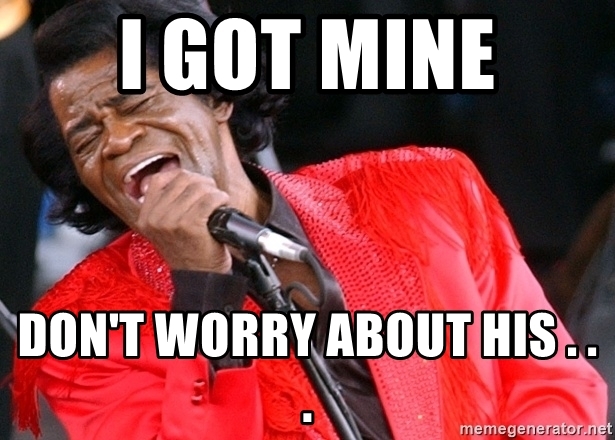 Before we get any farther, this blog has always been pro-union, wherever that may be. NHL owners, all team owners really, and probably almost all insanely rich people are evil and need to be fought against and reigned in. I am wearing three Che Guevara shirts right now.

That said, the NHL is being stupid on all sides. I can’t sum it up any better than Barry Petchesky does here, but in a nutshell we’re in the height of NHL transaction series and no one has any idea what their budgets are. That’s really solid work there, and only possible in hockey. It wouldn’t be so hard to figure out a hard deadline when both sides need to agree on what the cap should be, except neither has gotten around to it for what seems to be simply because neither thought of it. That’s hockey, baby.

Anyway, the main sticking point here is that the players don’t want to use their installed escalator to the cap, which can go up to 5% of what the cap is dictated to be. So if the cap were set at $82.6M, the players could raise it as high as 86.7M. But they won’t, because of escrow.

At this point I’m guessing most of you know what escrow is, but for those who don’t, because the salary cap is pegged at projections of a 50/50 split of revenue, portions of a player’s check are held back in case actual revenue doesn’t meet the projections of a 50-50 split. Now, I imagine having 10% of your salary just held in jail every month sucks, because you have a contract that says you should get paid the full amount. Especially when we’re talking about guys making $8-10 million, that’s a lot of money you’re not seeing. Anyway, at the end of the year when everyone knows what revenues are, that money gets returned to the player or sent to the owners to even everything out.

And players hate it. You can see why, but the problem is that there really isn’t any other way. If you have a system that bases salaries and salary caps on projections, then there’s always going to be some sort of fail-safe to make sure the real numbers match up with the projected ones. You can’t know for sure what revenues will be down to the dollar. And sure, the owners don’t have similar skin in the game because they don’t have salaries, they just take the revenue that’s not given out as salaries. There’s nothing from them that can be put in something similar to escrow.

You could peg the cap to the previous year’s revenues, but then players wouldn’t be making half of what the owners are currently making and the players would hate that. You could try and just negotiate a fixed number years ahead, but neither the players or owners are going to risk getting less than half the pie now. There’s little wiggle room, so not utilizing the escalator is the surest way to keep escrow down or even not have it at all.

And to the players, or at least the bigger ones up the chain, that’s what matters. But the problem is that not raising the cap squeezes out a lot of other players. How many veterans, who probably should be earning $3M a year or so, end up just signing PTOs in September because teams simply don’t have the space to fit them in yet? How many veterans are going to give up total salary, not just escrow, to fit into a team’s cap space simply because they have to. Maybe it’s their last contract.

So Jonathan Toews can bitch about escrow all he likes, but someone should ask him if that money that he only “might” not get is more important than say, players like Marcus Kruger or Valtieri Filppula getting jobs at all or having to take serious pay cuts. You are supposed to be a union after all, aren’t you? A higher cap means more for more players. You would think it’s the greater good.

Again, the players agreed to this system. If they hate it so much they should have actually held out for a luxury tax system, or at worst some kind of veteran or mid-level exception like the NBA so that their non-use of the escalator isn’t costing other players jobs. But at the end, much like owners, players aren’t really that concerned with getting everyone something as long as they get their something.

Tags: escrow NHL NHLPA Salary Cap your tears don't do much for me