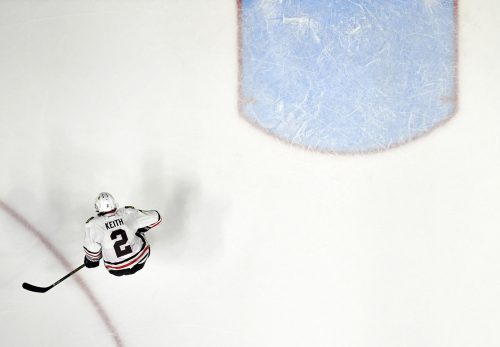 It will be the longest summer for the Hawks since 2008. Even when they bit it in the first round in ’11, ’12, and last year, they at least made it to the last week of April. They barely cleared Tax Day this time.

So there’s going to be plenty of time for the Hawks to diagnose their issues and then prescribe what they want to do about it. Fifth Feather was correct last night, in that you can’t make rash decisions on a small set of games. Let’s go back to 2012. You actually forget how good that team was in the regular season, the second half without Toews. They finished with 101 points, and after that nine-game losing streak that nearly killed us all, they actually went 16-5-4 with Patrick Kane as the #1 center.

But they got goalie’d by Mike Smith, Toews wasn’t in any condition to be playing, and Crawford threw up all over himself. You’ll recall after that series there were plenty of calls for heads to roll, trade Kane for Ryan Miller, and how the 2010 Cup was a total fluke. You’ll also recall that this is when the rumors of Q and Stan Bowman not working well together and Q batting his eyes to Marc Bergevin in Montreal started to swirl. This supposedly caused McDonough to sort it all out, which led to Mike Haviland being turfed as an assistant and the hiring of Jamie Kompon, whatever that did for you.

Luckily, Stan Bowman didn’t buy into any of the hysteria. He basically only added Michal Rozsival, let Saad develop in Rockford during the lockout alongside Leddy and Shaw, and then got a career year out of just about everyone that led to a stupid .750 winning percentage in the season in a can.

So to expect a major overhaul, after the regular season, is folly. Even if you think the Hawks’ window is completely closed, Rocky Wirtz isn’t going to wave goodbye to one, two, or three more years of getting at least some playoff revenue for a complete tear down right now. And that’s not even necessary.

There are some truths from the season, and some we ignored. I don’t think four really awful games against an opponent wearing an Infinity Gauntlet changes everything that went on before. Ryan Hartman is now suddenly helpless. Nick Schmaltz is not now a waif who will never score when it matters. These are still contributors to an NHL team.

We know the Hawks aren’t the possession team they were. Really, their CF% has been declining for three years now. The ’15 team’s mark was three points lower than the team before it, and declined both years since. Their expected goals dropped off a cliff after 2014 and hasn’t recovered. That’s kind of what they are now.

We thought the Hawks top line talent could outshoot the percentages again, as they had done all season. They couldn’t.

Still, to pronounce it all over when the Sharks went to a Final with Marleau and Thornton still front and center last year, where the Penguins went seven years between Final appearances, that seems a tad harsh. No, there aren’t multiple runs left. There’s probably one, which could end anywhere from a Conference Final  to another parade.

The issues are clear. So let’s go through them:

-The Hawks defense is now slow. Yep. You saw a glimpse of what it used to be in the first half of the third period last night when Keith actually was able to summon Keith’s game and was breaking up things at both lines. That’s one of the few times the Hawks looked dangerous.

Going forward, the Hawks have a choice with Keith. The past two years they’ve asked him to take on the best competition, lock them down defensively, and push the play up the ice as well. Now they can only get one from him. Neither is the wrong choice, but whatever they choose they’re going to have to find someone else to do the other.

We have all summer to go over names. Trouba is probably still gettable. Carolina is rife with d-men and they can’t sign them all, with even Noah Hanafin being whispered to being available for the right price. You can always convince Vancouver to do something stupid and give up Chris Tanev (he’s better than you think). There’s the glut in Anaheim. There are options, depending on what you want to give up.

-Ah…there’s the rub. The Hawks have to open up cap space whether they want to go trade route or free agent route, and the latter is crap. Shattenkirk isn’t gettable, Franson and Kulikov are probably not enough and that’s about it.

We’ve always speculated that this would the summer that Hossa is LTIR-etired, but that hasn’t been whispered about yet. Maybe, but let’s act for now as if that’s not happening. The Hawks are rife with no-moves… except Panarin’s doesn’t kick in until July 1.

And this is where tough decisions need to be made. I wonder if at this point Panarin isn’t a luxury player. He’s great to have if you have everything else. But the Hawks don’t have everything else. He also probably has the most value of any of the big names via trade given youth, cost, and production. As far as replacing it, it’s not easy but then again Patrick Kane has turned others into big time scorers. They’ll make a lot of noise about DeBrincat needing seasoning in Rockford, but that kind of production speaks to an instinct that can play in the league right now if not asked to do much else.

The Hawks need something close to a big name on the blue line, and they’re not getting it without giving up something of true value. Forsling can replace Campbell on a third pairing, I’m fairly confident in saying that. You can’t ask too much more of him yet. Kempny should be able to take the load off Seabrook and Hammer a bit. But they’ll still need more. Panarin, when he wants , is a dynamic player. But too often this season we saw a stand-still shooter. It’s what became of Patrick Sharp from 2013 on. As strange as it sounds, you can replace that.

Because even if you could get no-moves waived, and you usually can, I just don’t think Seabrook has much value. I’m not sure Hjalmarsson would have too much more, if you’re giving in to fears that he might age terribly and soon (a legitimate fear). Keith isn’t going anywhere, and a trade of a d-man is only adding to the deficit you have to make up anyway.

The other answer people will suggest is Crawford. You can see it, but in a league where the margins are so small now and the difference between teams so tiny, it’s a goalie league. It’s very hard to go anywhere if you’re not getting .920 between the pipes. Crow has been in that neighborhood for five straight seasons now. He’s a known known. You can take a big chance that Darling can give it to you full time for cheaper, but if he doesn’t… well, you’re Dallas or Winnipeg.

Well, he’s probably hurt now. He’s probably been hurt most of the season. Everyone who caught his grimace after unleashing a wrister that was basically an apology to Rinne last night could see something was off. If it’s back problems again… that’s scary because those don’t tend to get better.

This is also the second straight season that Toews’s metrics have dropped from the dominant player he used to be. Two might not be enough for a trend but it’s enough to start planning for one. Look, Toews isn’t going to reinvent his game like Crosby this year and suddenly pour in 40. Toews could move to having the puck less offensively, but he just doesn’t have the scoring instincts that Crosby has. That would also be a question of linemates, and if the Hawks could find someone or someones who could do the dirty work down low in the offensive zone for Toews for once. Maybe it’s possible.

But some sort of adjustment is needed. What was once asked of Toews, much like Keith, probably isn’t possible.

Stan Bowman probably has three untouchables. Kane, Toews, and Keith. The latter due to his age, the former to his importance, and the middle simply because that’s just not going to happen. If someone calls about anyone else, they should be at least listened to. It can’t hurt to see.

Of course, the problems aren’t all internal. No matter what the Hawks do, there’s no guarantee the Oilers will fuck up what should be a force. They could, but they also have the best player on Earth and if Draisaitl isn’t Malkin to Run CMD’s Crosby he’s going to be soon. Calgary also looks like they should be really good next year. Nashville isn’t going anywhere. So there’s the targets.

It’s not going to be easy. It’s going to require a level of creativity Stan hasn’t really had to go to before. But it’s not impossible.