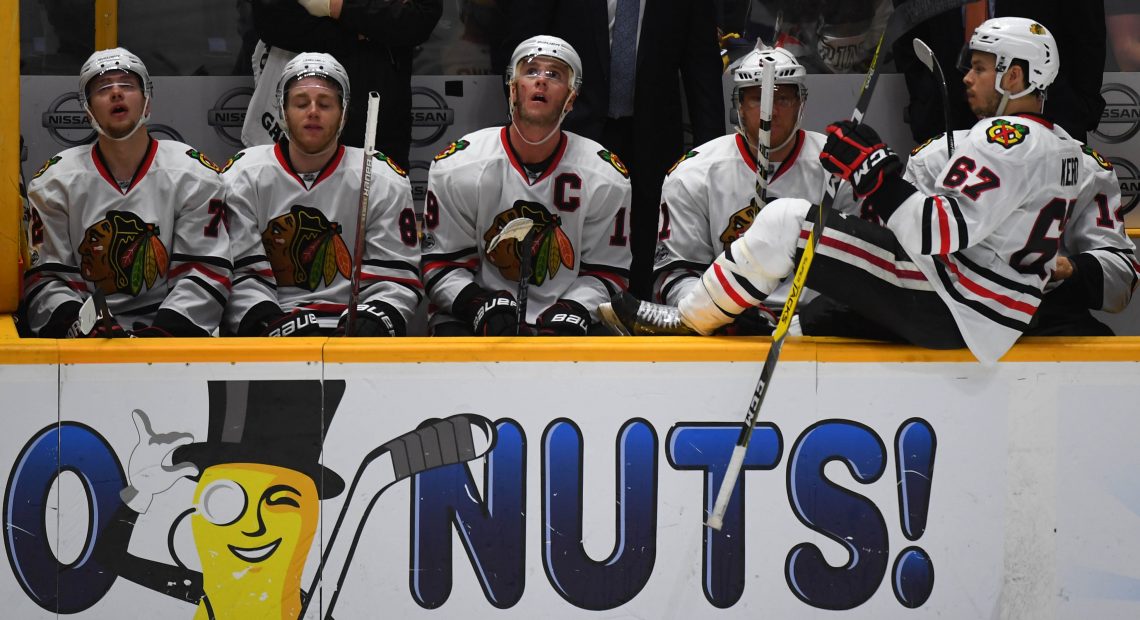 McClure’s recipe to beat the Blackhawks in the post-season remains undefeated – Either control 55% of the play or have your goalie stop at least 95% of the shots he faces. For the Predators, Pekka Rinne stopped 98% of the shots thrown his direction. That is the biggest reason for the Hawks season ending in 4 games and why this was their worst/shortest playoff appearance in this era.

While the broadcast booth, head coach and talking heads tried to downplay the lack of Hasek-like saves from Rinne in this series, he still stopped nearly every shot thrown his direction. And that’s not something you could say in his previous two appearances against the Blackhawks in the playoffs.

Surely, a goal like this was the result of hard work, determination, guts, grit, blah, blah…

Rinne was excellent in this series, stopping every shot he needed to. That was the biggest difference. Pure and simple.

On the other side, Corey Crawford was nearly as good. The problem was his team only scored 3 goals in 4 games and only one in 5-on-5 play. Crawford kept the Hawks in the game, once again, while Nashville teed off in the first period looking to end it early. Of course, his team couldn’t get anything past Rinne.

–The Predators second goal was the perfect microcosm of this forgettable series. The Hawks have a dominating shift where the Predators couldn’t touch the puck for a solid minute. Rinne makes a couple key stops; Viktor Arvidsson gets sprung on a break because the Hawks were gassed at the end of a shift, he finds the trailing Colton Sissons while Brent Seabrook somehow loses his stick. Crawford makes a terrific save, doesn’t know where the puck is, feels it hit his arm and then reacts by throwing it into the empty net.

With ten minutes left in the third and a two goal deficit, that was pretty much it for the Hawks.

What a fun series.

I’m not sure there’s really anything else to say about this game. It went just like the other three. The Hawks looked good for stretches; Nashville looked better and every time the Hawks looked like they may score, Rinne made a save. Then Nashville would come down and score off a shot that deflected off three sets of blades, a stick, a visor and the corpse of Johnny Cash.

–It would’ve been nice to see Kempny’s speed in a series like this. It would’ve been even better if he didn’t get his first sniff in an elimination game on the road. Tonight, Kempny created chances in the offensive end with his feet by breaking through Nashville’s neutral zone trap a few times. Alas, his usage at the end of the season made it impossible to play him more than 8 minutes he got tonight as he would’ve been prone to a few more mistakes as the ice time increased.

To be fair, though, Johnny Oduya played his best game of the series but that’s after three games where he was abysmal.

–How do I even begin to try and explain how or why Nashville looked so much faster than the Hawks over the course of these 4 games? I really can’t. After the last couple years where the Hawks clearly were getting out skated by teams (Really, I thought the 2015 series against Nashville looked just as heavily tilted towards the Predators at times but the Hawks somehow managed to win 4 games. Because hockey and they wanted it more or something like that), I thought they addressed this issue heading into the season.

Surely, 109 points and their place in the standings is a good indicator they were on the right track. Schmaltz, Hartman and Hero were all younger, quicker and faster than Andrew Ladd, Tomas Fleischmann and Dale Weise. Brian Campbell, Kempny and (bad) Oduya were all upgrades over Omer Svedberg and Erik Gustafsson.

The more I think about it, I’m leaning heavily in the direction that the Hawks really emptied their tanks chasing this division title back in February and March. When it came to going to the reserves here in April, they had nothing left.

We discussed this on the podcast quite a bit but this was the first time in the Quenneville era the Hawks kept the pedal to the metal in the final couple months of the regular season. It meant they won the division and clinched home ice throughout but that doesn’t do a whole lot of good when you only muster 3 goals in 4 games of the playoffs.

–As for what’s ahead, we have plenty of time to pontificate about the future of this roster. There are some areas that are in need of an upgrade but they certainly don’t need any kind of major overhaul. It’s very easy to overreact after a series like this because it all looked so terrible. You only needed to watch five minutes of the post-game show to know that Jamal Mayers should be allowed nowhere near hockey personnel decisions. And I’m sure his opinion aligns with 99% of the CSN viewing audience.

Obviously, the hard cap will force some key changes to be made but that’s not anything new. If there are issues taking place behind the scenes, (i.e. an LA/Sutter situation) that changes the dynamic of what may happen but there’s no inclination of something like that at this moment.

I’m not nearly as pessimistic as Sam and don’t believe any windows have been shut permanently. All you have to do is look at teams like Anaheim, Nashville, San Jose, or Pittsburgh as teams of recent vintage whose proverbial window was closed and yet, they’re all still playing with a real shot at winning it all this year. Calgary was some scary, young fast team that lasted as long as the Hawks and were ousted by a team with Kevin Bieksa playing big minutes. Edmonton will most assuredly fuck up whatever they have plenty of times in the coming seasons. Things aren’t as bad as they may seem right now.

Hockey will continue to be the most weird, unpredictable sport from year to year. That you can bet on.

–Thanks to everyone for reading, listening and sending in your questions this year. Hard to believe we’ve been doing this for 9 years now. I’ve mentioned this before but I thought this season (at least the regular season) was probably the most fun since 2013. Of course, the playoffs were as miserable as all of last season but at least the Hawks were nice enough to end it as quickly as they could.

It goes without saying that we’ll still be around in the months ahead. Free agency and the draft will be here before we know it. For the Hawks, it shaping up to be a pretty active time.