An Elegy For Brandon Bollig 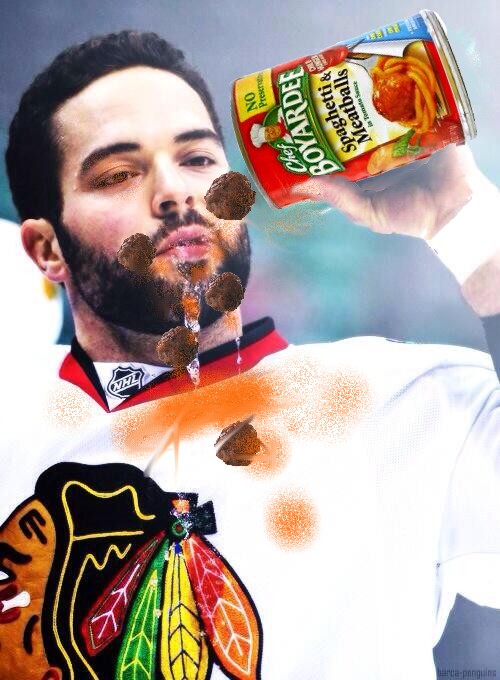 This ran in the March 4th print edition for the game against Colorado, right after Bollig had signed his inexplicable three year extension. So it’s with no small amount of glee that he was traded to the outpost of Calgary over the weekend, where the new braintrust will appreciate what he brings to the table, and he will have a new batch of high school girls and jock sniffing misogynists to impress. And that he recently bought a condo in River North just makes it extra hilarious.

Brandon Bollig is a stupid and terrible hockey player, and anyone who defends his presence on any NHL roster is a stupid and terrible hockey fan. This includes Stan Bowman and Joel Quenneville, the former of whom just signed Bollig to a three year extension, worth $1.25 million against the cap for those years, and the latter of whom is so enamored with Bollig’s non-existent skillset that his continued use of him has somehow pulled the wool over the hockey viewing public’s eyes.

While Bowman himself has earned high praise in these pages for some of his more progressive moves in the past, a move like this is not without precedent. He signed John Scott to a multi-year deal. He then signed Dan Carcillo to two different contracts. In both cases he was able to trade his way out of those mistakes, and in both cases, as well as this current one, it’s debatable how much influence Joel Quenneville is wielding over the roster he ices on a nightly basis, considering that of the two men in the most control over hockey in the Hawks’ front office, Q is more of made man that Bowman is for reasons still unclear. Even more troubling is that Quenneville has seemingly shown in the last 48 hours that he has the power to shape the entire system even in a passive-aggressive mode with Brandon Pirri being shipped off to Florida for picks after never finding his way into of Quenneville’s Circle of Trust. While Pirri likely didn’t have a long-term future with the organization past this year with Teuvo Teravainen waiting for his chance in Finland, he still had the potential to matter for the remainder of this season, with Patrick Kane still looking for his first goal while sharing the ice with Michal Handzus.

Also alarming is the message these two moves send regarding the direction of the Hawks’ play and what they truly value in a player. One who has discernable NHL skills that might need some time to develop still at age 22 is jettisoned while another with no skills and no potential whatsoever is given a three year deal at age 27, one that will take him til age 30. Brandon Bollig can’t skate and therefore he cannot forecheck effectively from a fourth line role to force any turnovers, as well as making any hits that he delivers completely pointless as the puck has long since left. Bollig has zero hockey sense whatsoever, evidenced by the fact that whenever the puck hits his tape in the offensive zone it results in an oft-times errant shot directed at the net, or he’s banging his stick on the ice for a pass that isn’t coming because he’s out of position and his teammates justifiably don’t trust him. Even notorious turd (and LOCAL BOY) Mike Brown of the Oilers recently clowned Bollig by goading him into a roughing penalty showing once and for all just who the most useless player in the Western Conference is.

Bollig is a supposed physical deterrent that doesn’t deter shit when he’s on the ice, and he needn’t look any further than his center Marcus Kruger getting absolutely annihilated at least once in any given contest. It’s because his skating is so below NHL grade that he can’t get to whomever the offender may have been in time for it to matter if he could lay a clean check. Because the Hawks justifiably don’t have a need for anyone to punch faces, there literally should not be any place for Bollig on this team that has even more championship aspirations, yet the situation persists. There are those that would point to an improvement from last year, and to finding a home on a line that’s basically used as a human shield starting nearly every shift possible in the defensive zone, but it’s damning with faint praise. Bollig clearly cannot keep up against top assignments, and is often woefully out of position when the unit is hemmed in, which happens often. And the next time he catches a breakout pass on his halfwall cleanly will be a first, with the most damning example being his colassal boner leading to Daniel Paille’s overtime game winning goal in Game 2 of the Final against the Bruins last June.

Of course, he also stands as a shining example of no athlete ever being too white or too talentless for Chicago sports fans and media to fall in love with. That he tries hard and has improved from “undraftable liability” to “14th roster forward” should not be justification for giving him a regular shift as an unscratchable cog in the Blackhawks machine, let alone a three year committment, no matter the cap number. It’s a pathological and seemingly terminal affliction to this city, that fans seem to place themselves in the position of some contrived blue-collar aesthetic, as if that’s how’d they would like to see themselves, being appreciated for being minimally talented. And the media, for their part, cannot seem to get enough of these characters because they tend to provide a good quote. But if a player is a completely worthless bag of crap as Bollig is, he’d better move the needle a little bit to compensate, otherwise there’d be no reason for anyone to talk to them, and gaffes like Game 2’s on Bollig’s part would have to actually be scrutinized.

Exacerbating that point is the fact that Bollig actually believes his own bullshit. Hell, he made an ad for Bauer in response to the famous Kane stickhandling video illustrating just how talented he isn’t. His presence on Twitter is nothing more than self-aggrandizement for his non-accomplishments, and that he’s a native of St. Louis certainly doesn’t help matters in the personality department either. And even yesterday, he took time out both on twitter and in the press to call out his “haters”, a true province of douchebaggery if there ever was one. He stated to the press contingent that he gets a laugh out of it because the “haters” on line hide behind anonymity and would never actually attach their name to any badmouthing of his game or him as a person. Well, Brandon, my real name has been attached to both this column and any posting on line for nearly five years now. I’ll be glad to tell you to your face just how useless on the ice you are, so I can look you in the eye to tell you “fuck you”.