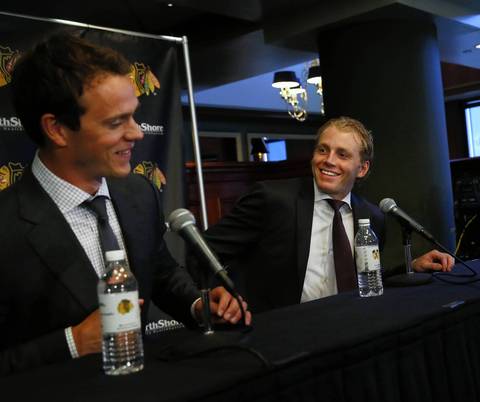 I suppose that with it being summer and the Hawks having already made their signings and not yet a trade to clear cap space, we have more time than we should to study the narratives they are pushing. It’s not something I consistently want to do, but they keep putting this stuff out there and some of it is just wide of the mark. And those who are supposed to stand watch and call it out are once again passively accepting and even echoing it themselves.

During yesterday’s press conference, the Hawks and the sycophants who cover them couldn’t wait to tell us that Jonathan Toews and Patrick Kane took less money so that they could keep the team together (even though the team is already over the cap). Their agent told everyone that they could have asked for the maximum $13.8 million per year.

That’s nice. I’m sure they could have asked. And Stan Bowman could have laughed them out of the room.

Just because originally Toews and Kane asked for more than the $10.5 million they got doesn’t mean they’re sacrificing something. Because as we’ve discussed before, they’re basically getting paid market value. If they were truly taking a “hometown discount” wouldn’t it look a lot more like Ryan Getzlaf’s and Corey Perry’s contract? Wouldn’t that be a real discount?

Because as we looked around before, $10.5 million in salary is less than the $12 million that Sidney Crosby gets as it should be. Because neither of these players is Sidney Crosby. Daydream Nation are wonderful players, but what are we talking about here? Toews doesn’t have a 40-goal season. Kane doesn’t have a 90-point one. And hey, I’m the one who screams the most that Kane hasn’t had any help to get those gaudy point totals. But if we’re saying that Kane took a discount, then wouldn’t a $11 or $12 million player that he supposedly should be not need any help? Crosby turned Pascal Dupuis into a fucking legend, and Pascal Dupuis sucks! They each have a Conn Smythe, I get that, but those Conn Smythes should have gone to Duncan Keith and Corey Crawford, and that’s not much of a secret to anyone. Toews has one Selke and has never finished higher than 4th for the Hart. Toews was on a point-per-game pace in the lockout seasons, so that’s two 70+ point seasons. Patrice Bergeron has the same amount, and an additional Selke. Do you think of him as a $10 million player?

Hey, I get it. They’ve won. They’re clutch. They perform in the big moments. So does Justin Williams. Is he going to get $10 million?

This isn’t an argument that Kane and Toews are overpaid. They probably aren’t, and if they are it’s by a small margin. Certainly they should be making no less than $9.5 million per year. But getting paid what they’re worth or deserve is not taking a discount to keep the team together. Sure, they also project to be good for a while and you pay for what a player is going to do and not what he has done. But Toews is 26. Considering how it’s now thought forwards peak, he only has about three years left in his peak years. That means he’ll be getting paid $10.5 million (admittedly that will be less and less a share of the cap) while he’s declining. Add one year for Kane’s peak and one off his decline.

Of course, Kane and Toews come with this unquantifiable factor of being the center of the entire Hawks’ marketing drive, and the center of the organization. They couldn’t possibly have let either of these guys walk. That obviously drives the price up. But this whole urge to augment that marketing drive by saying these guys sacrificed some money for the good of the team… it’s basically bullshit. They took market value, and there’s nothing wrong with that. We don’t have to champion it to make it ok when the roster actually does get squeezed so we forget that it was these deals that caused it.

And another thing while I’m on the soapbox. I’m getting a little tired of these articles with the premise, “Look at how different is for the Hawks now! This never would have happened under the old man!”

Yeah, we get it. But it’s been seven years since Bill Wirtz went down for the dirt nap, and things have changed so rapidly that and massively that it’s not even worth looking back any more. Sure, it’s always great to have perspective, but I feel these kinds of articles– led by Mark Lazerus’s barley guised plea to leave him alone through a “Golden Age of Hawks Hockey” article last spring–are basically meant to keep fans from looking at anything closely. “Hey it used to be way worse so just shut up and take this!”

What’s the limit on not comparing to the previous Wirtz’s Hawks? 10 years? 20? For me, the time to judge Rocky’s Hawks against Bill’s passed as soon as the Hawks made the playoffs in 2009. Rocky’s Hawks should only be judged against previous incarnations of Rocky’s Hawks, and that’s it.