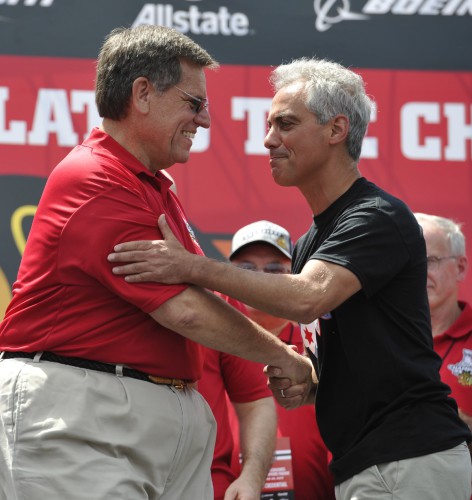 I’ll admit it. I have no idea why people spend money to go to this Blackhawks Convention. I’ve always thought the Cubs Convention was creepy and weird, and I guess the Hawks version has less geriatric women from Iowa and Nebraska with really silly hats and jewelry and talking about just how much they love the “Hawkies.” Though I’m sure it comes with its own share of weirdo. Just a guess, but I bet he’s got a mustache. Though I suppose if you’ve ever dreamed about banging a Hawk, this is the best chance you’ll get. It’s in a hotel, after all.

To me it seems like a great way to be around a bunch of sweaty people wearing hockey jerseys in July (even I put mine away until at least after Labor Day). I’m sure if you have kids it’s great for them, as they can get somewhat close to their heroes. But this is yet another reason you shouldn’t have kids, then.

And it’s filled with these seminars where you can’t ask anything that matters and all anyone really cares about is when some kid asks some awkward question or whatever. (Sidenote: a truly interesting panel might be old media vs. new media, and we would be part of that, but I won’t sit on a hot stove until they actually let us into this thing. And I’d probably go play golf or soccer instead anyway).

But hey, someone is going to get a chance to ask some questions, and you can ask non-controversial ones that might not piss anyone off. Yeah, I could do this myself, either by going or via press pass (cuz that would happen), but I’m not gonna. But if any of you are going, and you just happen to get the mic, and someone who might know just happens to be onstage, and by the even infinitesimal chance they might answer it, here are some interesting yet not hard-hitting things we real fans might like to know. And if you actually ask this at the Convention, we’ll send you something (t-shirt, beer, beer-soaked t-shirt, something)

1. It’s not a big secret around town that the Cubs are going to start their own television station in the next few years. With McDonough’s past connections, or just a need to grow their TV and ad revenue, would the Hawks be going with them in a Bruins-NESN type arrangement? Good luck getting anyone to answer this, but it’s certainly not insulting to anyone. And it ties into…

2. Rocky still claims that the Hawks lose money (not that anyone here is buying that but I’m not starting that debate all over again). Where are some areas they fall short? What would they like to improve? We know it’s not tickets or merchandise. They own the building. Is it ad and sponsorship money? TV money? Where do the Hawks think they can grow? Again, this isn’t insulting anyone because Rocky hasn’t hidden his claims of operating at a loss, so it’s just seeking more information on what he said.

3. The ice. We talk about it all the time. For a team that wants to play at such a quick pace, having maybe the worst surface in the league isn’t conducive. We know this. But it’s not just what the ice is like in May. It’s awful in January. And we get it, the UC is a multiple use building with a lot of events and there’s only so much that can be done. But you know, the ACC in Toronto has the same amount of use, and I don’t hear near the complaints about its ice. And Toronto’s climate isn’t that different than Chicago’s. Boston has basketball and hockey games on the same day. Surely in this day and age, someone has come up with something to keep the ice at least acceptable.

Actually, all I want is for the brass to admit it sucks. Because they never have. I’d settle for that.