While the Hawks first game of consequence in the month of April did not go as planned against the Trailer Park Boys, the Hawks are still in the conversation for home ice provided they get some help while taking care of their own business. And that business involves the Wild tonight, where the Hawks can clinch no worse than the third seed in the Central with a single point.

There has been no team in the post lockout era whose fortunes have so dramatically shifted within the context of an 82 game season than the 2014-15 Wild. The 2012 Kings might be close, but it took them into the playoffs for water to begin to find its own level. And the funny thing is, their success seems to be inversely proportional to their possession numbers. The date where fortunes began to change is January 15th, when Devan Dubnyk was acquired. It was mocked in this very space that if he needs to be a savior then a season might not be worth saving. But he’s come through with Vezina caliber numbers, sporting a .937 save percentage while starting 37 straight for the Wild coming into tonight. But as Dubnyk has bailed them out where their previous clown car of goalies were torpedoing their season, the Wild’s share of even strength shot attempts has dipped precipitously. Prior to Dubnyk, the Wild held a totally respectable 52.6% share of attempts at evens, and since his arrival, that has dropped to 49.6%. Now the Wild are giving up approximately the same amount of attempts per 60 minutes in those time frames (52.0 pre to 52.9 post), so it’s their attempts for that have gone down. This could be a result of not having to press late in games as a result of being down because their goaltending was shitty, but if that trend continues, the margin for error vis a vis a Dubnyk regression to human form is almost nothing.

That’s not to say there is a lack of talent on this team. In fact they’re quite balanced, and have shown an ability to keep up with the Hawks in the speed department since last year’s playoffs. Predictably the Wild are led in scoring by Zach Parise, who now has his first 30 goal season in Minny under his belt with 32. And while the Wild haven’t gotten as much scoring as they’d like out of Mikael Granlund, he still drives possession against top competition, and there have been pleasant surprises in the forms of Jason Zucker and Nino Neiderreiter, the former of which is returning tonight from a broken clavicle in 8 weeks and has 18 goals, and the latter of which is second on the team with 24 goals. Chris Stewart seems to give a shit because he’s playing for a contract now, and hasn’t been horrendous since arriving in St. Paul. Tomas Vanek has 21 goals and 51 points, but hasn’t necessarily gelled totally with this team in his first year, as he’s become more of a stationary shooter as he ages, and this team moves. That’s reflected in him being the only forward in the top 6 with less than a 50% share of attempts. The bottom six for the Wild is where things get a bit dicey, as Matt Cooke can’t really play anymore, and Kyle Brodziak has always been a bit of a turd despite the fact he always scores against the Hawks regardless of situation.

On defense, it’s obviously still the Ryan Suter show, as he still averages 29:06 a night and regularly eclipses that as a game situation warrants. But it’s not just Suter and Brodin still carrying everything for the Wild d-corps. Marco Scandella has had a breakout year in terms of scoring and driving possession, and actually gets far worse zone starts than Suter. Matt Dumba has produced 8 goals albeit in heavily sheltered minutes, and Jared Spurgeon is always a threat to jump into the play.

As for our Men of Four Feathers, home ice in the first round still remains the primary objective in the remaining three games, and they’ll realistically have to win all of them and hope for some help in order to do so. That climb got marginally steeper with word today that Brad Richards will miss those games but expects to be ready for the playoffs. It’s slightly disappointing to have him out given how he has been playing, but given his fades in the past few springs, it’s probably better to err on the side of giving him rest. Richards’ absence creates an opportunity for Antoine Vermette to move back into his natural center position after spending some time on the wing because Quenneville is going to Quenneville. The actual vacated spot will be taken by Kyle Baun who will be making his NHL debut tonight after being given assurances of NHL playing time were what sealed him even signing with the Hawks. Baun projects as a power forward with hands, though and could line up to be a replacement for Bryan Bickell once his salary is purged.

On the blue line, Kimmo Timonen will also not play tonight after getting crunched by Dumpster Dweller Ryan Reaves early on Sunday. The hit itself looked like more of a shoulder issue than a dizzyness issue, but it really is anyone’s guess. Again, it’s probably better to err on the side of caution with a 40 year old who is still getting up to speed with a new team, but he certainly could use the reps. David Rundblad will draw in tonight. There’s been no word on what the pairings will shake out as tonight, but anytime Q wants to put Keith and Seabrook back together and shelter the shit out of Rozsival on the third pairing is quite alright with everyone. Corey Crawford obviously gets the go in the net tonight.

The Wild were in action last night at home, losing to Winnipeg and making their playoff situation dicier. They have clinched nothing and in theory could bone this with their remaining three games against the Hawks tonight and then on the road at the Preds and Blues, all of whom are not taking their respective feet off the gas either. Look for them to come out and press early and then let Dubnyk do his thing. Mike Yeo has shown the ability to be able to change styles within the context of a game, and he’s got the pieces to do so. The Hawks will need to keep their exits clean with what should be a press forecheck from Minny, with the forwards keeping a tight gap on breakouts and regroups. And getting the 6’6″ Dubnyk moving and creating misdirection with screens in front will be paramount in capitalizing on the shots the Hawks earn. There are no small games from here on out. This team has continually stated it will rise to the occasion. It’s time to see it. Let’s go Hawks.

If you’re heading to tonight’s game, make sure to pick up a copy of our gameday program sold outside. If you’re not going, you can get the digital edition right here. 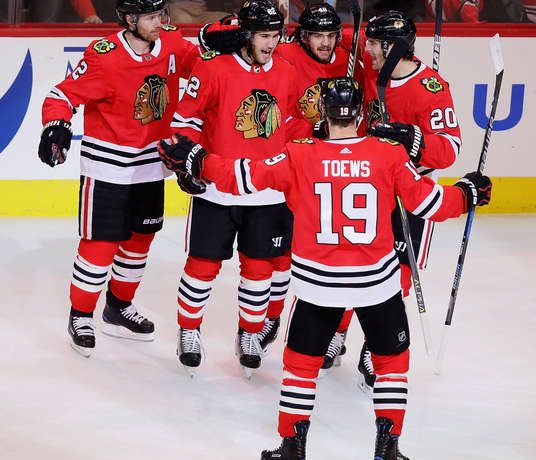