A Closer Look At Crawford

Much like quarterbacks and pitchers, goaltenders often have a rough go of it in Chicago, Corey Crawford is quite familiar with this fact. While he is not one of the elite goalies in the league, he has gotten the job done for the Blackhawks. Last season’s playoff performance left a bit to be desired, but there is more to it than just Crawford’s save percentage.

With the launch of the new stats site war-on-ice.com, comes the availability of newer breakdowns in goaltender statistics that may allow us to look more closely at just how Crawford has performed with Chicago and determine the effect the defense has on his numbers.

Here is a diagram of the areas of the ice for the purpose of shot origination. We can look at Sv% from Home Plate, Perimeter and Slot in order to assess goaltenders. 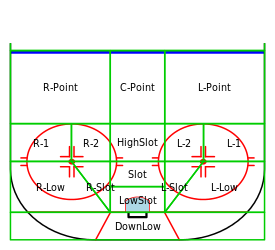 Home Plate Save Percentage is the Sv% for shots taken within the “home plate” area of the ice. This is usually the same area used to track scoring chances, which is formed by the faceoff dots in front of the goal and angles back to the goalposts thus created an area of the ice shaped like home plate in baseball; however, for the purposes of war-on-ice.com’s Hextally tool, it is considered the scoring chance area minus the area directly in front of the goal. 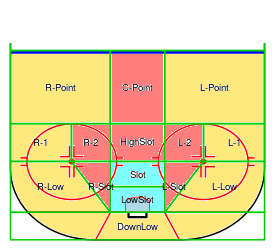 The red area is considered the “Home Plate” area for our discussion here. The slot area is the light green/blue area directly in front of the net. The yellow areas are the perimeter.

The Home Plate area is considered dangerous in terms of the likelihood of scoring. The graph above from war-on-ice.com shows the goalie’s Sv% for such shots versus his overall unadjusted Sv%. The color of the circle represents the Shots Against Rate for the team while that goalie is on the ice. The size of the circle represents the goalie’s time on ice. Using this graph, we can see that Crawford ended up in the lower area for HP Sv% on the season when compared to other goalies with at least 1300 TOI.

Perimeter Sv% as seen in the graph above, is simply the goalie’s save percentage on shots originating from the perimeter area of the ice. Again, Crawford appears near the lower crowd of players in this category. The Perimeter Sv% itself is a very nice looking number, but the comparison here is important for context.

Slot Sv% as seen here is the goalie’s save percentage on shot generated from the slot areas of the ice. This is basically the area directly in front of the goalie. Save percentages tend to be the lowest on average for goaltenders across the league in these areas. As you can see on the graph below, this is the area where scorers find the greatest success in getting their shots in the net. Interestingly, this is where Crawford excelled this season. Only Tuukka Rask of the Boston Bruins had a higher Sv% on shots originating from the Slot area of the ice.

In order to see if there was a numerically quantifiable reason behind Crawford’s Sv% over the last few seasons, I went over data including a few different factors I thought might make a difference. One question I had was would the rate at which the team blocked shots during the regular season have an effect on Crawford’s Sv%.

There does not seem to be any real quantifiable correlation between the changes in Crawford’s Slot Sv% and changes in the team’s rate of blocking shots.

The same lack of correlation held true for shot blocking and Crawford’s Sv% on Perimeter shots.

There does seem to be, at least on its face, a correlation between the team’s shot blocking rate and Crawford’s Sv% on shots originating from the Home Plate area. I’m skeptical about this result without video confirmation so I am not going to give this much weight in our discussion. It is certainly possible that this could have an effect, but I lean more toward the conclusion here that shot blocking overall may simply have reduced the number of shots faced from the Home Plate area as opposed to any other explanation.

The most logical explanation for the quality of Crawford’s performance over the past few seasons is shot suppression.

There is a very strong correlation in the team’s Shots Against Rate and Crawford’s overall Save Percentage as you can see in the graph above. The Blackhawks have been very good at shot suppression over the past few season but even slight differences in the rate of shots against make a big impact on Sv%.

The lesson we can learn here is that as the team improves its shot suppression techniques, i.e. neutral zone play, forcing opponents to areas with a low rate of scoring success, forcing opponents to pass instead of shoot, forcing turnovers, etc…, so improves Crawford’s Save Percentage and the team’s overall rate of success during the regular season and into the playoffs.