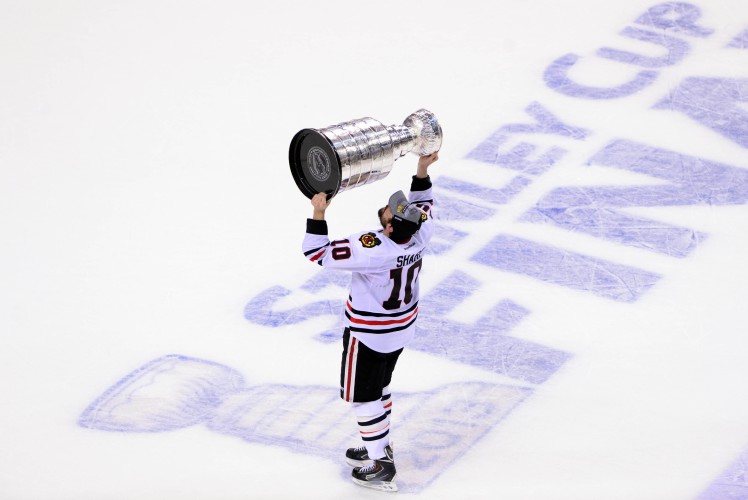 Thank god I don’t have to come up with any more band quotes. At least for like, a minute.

-First, there will be a Commemorative issue of the Indian. It’ll be out next week, and like in 2010 there will be a digital version and I will be printing and mailing out hard copies as well. Details on how to get them will come out when it’s finished somewhere next week. So look for that. If you signed up for a season long subscription you’ll get a free digital copy, but if you want the hard copy mailed to you I think it’ll be $5. So keep your eyes peeled.

-Second, the Indian will go year round just like it did last year. So digital subscriptions for the ’13-’14 season will open up soon, just not exactly sure when. Maybe around free agency day? I’ll probably combine the draft and free agency summer issues, we’ll have our Convention issue, our Bears Preview at the end of August, and one more in August that could be just about anything (Lollapalooza preview/review? I really have no idea). Again, keep an eye on this space.

So, where am I at a full two days later? I’m still in a state of shock I guess. As some have already pointed out, it was a nice bookend to the confusing ending in 2010 to have such a definite moment in 2013 to clinch the Cup. It almost felt like we missed it in ’10, and we were smacked across the teeth with it this time. Both are fine with me, obviously.

As McClure said to me on Monday night, whereas ’10 was elation or relief or something else, this one feels like validation. While I don’t really care what any other fanbase thinks, no longer can 2010 be dismissed as a one-off. In some ways, ’10 now seems even more special, as it not only ended forever the Dark Ages in this town, but signaled the beginning of something instead of being the culmination of something.

Maybe this is all we get (I doubt it), but now there are a group of seasons that can be viewed together. We’ll even remember ’11 and ’12 now as part of a larger narrative.

It’s funny how these things come together. While Stan Bowman should be waving his ass at everyone during the parade, and I’ve been among the quickest to defend him, let’s not forget that he at least wanted it known that he made a run at Parise and Suter last summer. How genuine it actually was and how much was just supposed to be an appearance of action, I couldn’t tell you. But how would this team have been with them? We can say that at least Bowman then showed the patience to not just to chase something when missing out on the big targets.

Our views on Quenneville are well-known, and it’s funny how he got here too. Gorilla Salad had to get hurt to get Brandon Saad in the lineup. The playoff moves have been dissected to death. But Leddy and Hjalmarsson and Oduya all had probably the best seasons of their career, and Q had to have had something to do with that somewhere along the line.

And that to me is the biggest difference this year and what came before. Hjalmarsson’s and Leddy’s improvement, and Duncan Keith’s return to The Flash, overcame a so-so-at-best (and frankly awful at times) from Brent Seabrook. Which is saying something. Having that solid of a defense 1-6 sets up everything else the Hawks want to do. It’s the platform for all that goes on in the offensive areas. It lessens what is asked of the goalies.

And that’s why I’m confident we won’t see a repeat of the ’10-’11 season next year. Oh there will be bumps and some streaks of incompetence. No doubt. But the Hawks will return that whole defense except Rozsival (I’ll shit a chicken if Leddy is allowed even to get to an offer sheet from anywhere else), and they’ve all been through this before now. They’ll know the challenges of a title-defense and be better prepared. As long as the Hawks have anything resembling this defense, they can’t possibly be bad.

None of us should be surprised how it ended, I guess. But that’s what makes this team so special to us. Even though we know they’re never done, they should never be doubted, they can still surprise us. Sure, I said they could come back from 3-1 against Scum. Did I see a storming 3rd period when facing the axe on the road and then overcoming THAT call and win in overtime? Who could?

Did I see them pretty much run through the defending champs? No, I didn’t. I didn’t panic when the Hawks were down 2-1 to the B’s, but did I see Game 4 coming? Of course not. So why wouldn’t they score twice in a minute to clinch it? It’s their way.

What I do want to clear up is that this series was some sort of statement or debate on which style is better. There was a lot of Speed and Skill v. Strength and Toughness in the last two series, as if it was an ideological battle for the sport’s soul. That’s rubbish. You can win the Cup playing just about any way, as long as you execute it better than anyone executes theirs. It’s more entertaining the way the Hawks do it to most people. But that doesn’t make it better or worse.

Anyway, that’s enough. Let’s party and dance some more. In fact, let’s do it all summer.