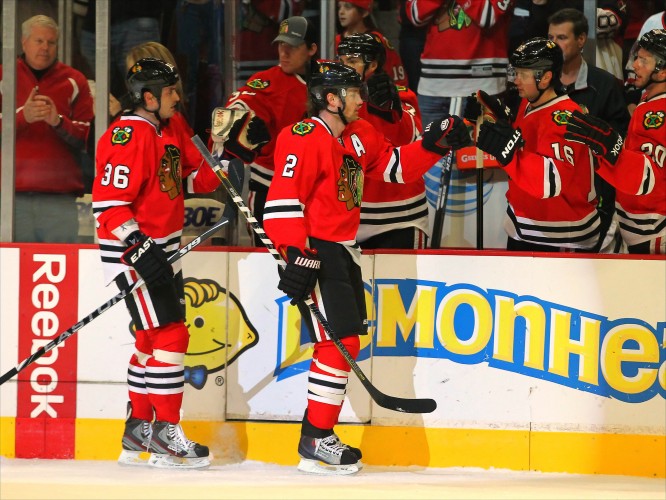 You know how I get. It’s not the blowouts or the last second wins that get me excited about the long term prospects of this team. Though I do enjoy the exhilaration of those, or the immediate release of jubilation, it’s the games where you exhibit a superiority that portend to what you might do in the future. At least in my eyes it is.

Tonight was one of those nights. Though the Sharks are probably no longer a conference power, they are not a conference also-ran either. And the Hawks simply outclassed them tonight. Out. Classed. It’s a term we haven’t been able to use very much the past two seasons, if at all. But outclassing means that at no point did you think San Jose could get the best of the Hawks with everything being equal. Every time the Hawks threw out a line or unit, it was better than what they faced. And tonight, it was.

Sure, this Sharks team is in a tailspin, but they never looked a threat. And the Hawks coasted. Let’s see why.

But I’m the one who spent a considerable amount of space in tonight’s Indian (and previous ones) documenting the amount of bullshit that Thornton has pulled on Tazer in response to getting eaten alive by him while playing hockey. Passenger #19 has simply had it fed to him by Captain Marvel for a while now. And each time, he’s responded by niggling, cheap punches to the dome of Toews.

Jamal Mayers cannot go out and fight Thornton. Jumbo Waif wouldn’t do it. Neither can Bollig. Or Seabrook. Or even Shaw. Not even Bickell. And Toews isn’t the type to just sit idly by and let someone else take up his cause.

Did it inspire the team? They say so, but I doubt it. This Sharks team was a hanging curveball. Wasn’t that hard to put it over the fence.

-Let’s talk about the actual sport. Marcus Kruger was deservedly the #1 star tonight and not just for his goal and assist. He was the most active Hawk in both ends, and his quick hands make up for a lot of what his lack of size can’t do. I’ve seen some call for him to be promoted to back where he was on Line #2, but he’s perfectly slotted right now. He can dominate on the 4th line, and his game of defensive responsibility and forechecking energy is perfectly suited for 4th line duty. No reason to fuck with what is working so well right now.

– There was a moment in the 1st when Bolland was thrown out of a defensive zone draw, and Sharp came in and won it. LEARN.

-The power play had some issues, but then it did everything it needed to to get the goal. There was movement, there was traffic, a puck got to the net and the Hawks won the battle to pot the rebound. More study needed.

-The biggest insult to Thornton tonight was that Quenneville didn’t care a jot about getting a matchup against him. He just rolled out whatever line came up, not fearing Thornton creating off of it. And he didn’t.

-Some Sharks fans thought Brad Stuart would be a savior. Dave Bolland dragged him and then got his own rebound when Stuart didn’t bother to get up off the ice. There you go.

-Patrick Marleau had one shot.

-Here’s my tweet from the 3rd. I think it holds true: I bet Marty looks over at hawks centers, then looks at Burish, and then considers how he’ll dispose of the body.

-Ray Emery left enough rebounds flopping like landed fish tonight, but the Hawks defense was really concentrated on clearing them. They’ll have to be if he has to take extended starts.

-The Hawks started the 3rd with a two-goal lead in the same fashion that has not pleased us earlier in the season. It was a 1-2-2 meant to choke the game out. But they pressed off of that as the period went on — aided by San Jose incompetence — and got the killer goal. LEARN.

This all works for me. Time to collapse now.

Game #47 – Golden Knights vs. Hawks: Lineups & How Teams Were Built 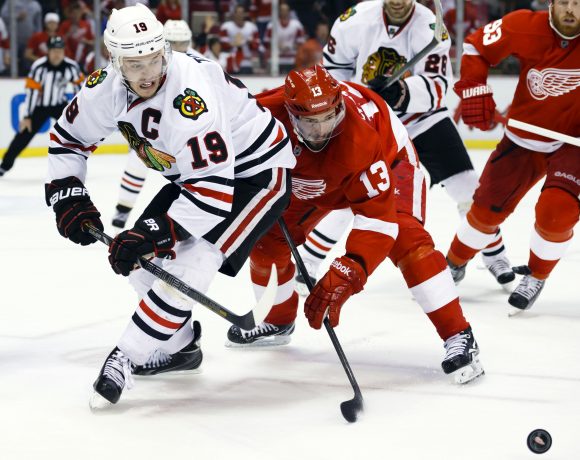