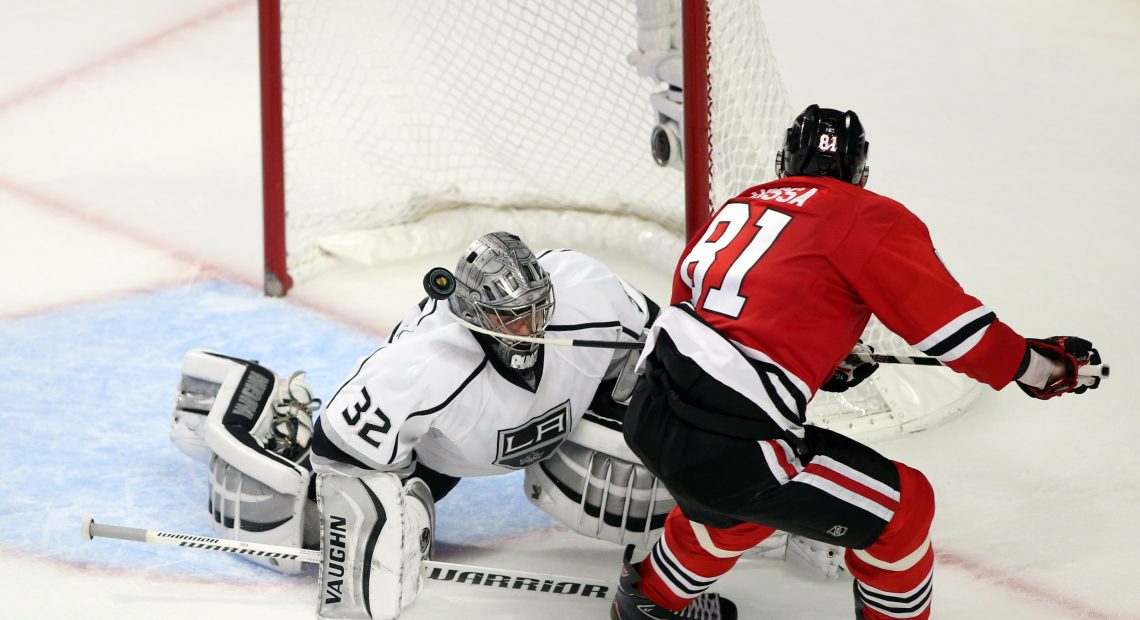 *Quick note: I wrote this yesterday prior to the Blackhawks game versus the Stars so the statistics used herein do not include the numbers from that game*

If you aren’t overly familiar with statistics, you may be new to the idea of regression. Regression basically tells us that things tend to return to their normal level over time. When we are talking about shooting percentage, the normal level is a little different for each player. The point though, is that while we should expect a bit of variance from season to season, we shouldn’t get too bogged down in low spots during the season. Players often talk about how as long as they are “getting looks” or “chances” they don’t get too worked up about whether the puck in going in the net. If they do get worked up about it, they say they are “holding the stick too tightly” and other such common terminology that all boils down to getting in their own heads over having a bad string of luck.

Right now, many of the Blackhawks players are in a bit of a low spot in terms of shooting percentage. Teams go through periods during the season when they just don’t seem to get the bounces and can’t buy a goal. With offensively gifted teams like Chicago, when this problem corrects itself, it can open the floodgates. Whether that is due to the players taking a deep breath, relaxing a bit and having some fun or something else, we can’t be sure. Right now, Chicago could use a big dose of good luck.

I can’t even count how many times in the last several games that I have seen a puck sit half an inch from crossing the goal line and not go in or a goalie make an amazing save that 9 times out of 10 he would not normally make during the season. This stretch of bad luck or whatever you want to call it has not only fans in a panic, but also the team it would seem. Joel Quenneville has had the line blender going faster than I can ever recall seeing it in the past. All of this is working together to give an overwhelming sense of anxiety around the team when what they really need is probably to calm down. The goals will come. The lines will gel if they are left together for more an 1.26 minutes of ice time.

You may not believe me or buy into this so I have some graphs that I hope will show you that things are going to turn around and the goals will start going in.

The graph above shows Chicago’s forwards from 2008-09 through the present. Except for this season’s forwards, this only includes players who played more than 20 or so games during a given season. This season’s marks are in yellow. It is plain to see that almost all of the forwards are struggling with shooting percentage at this point.

This graph shows the forwards’ FF60 (Fenwick For Per 60 or Fenwick shot attempts rate for the team) over the past few seasons (2008-09 through present) as well as their On Ice FenSh%. This season’s marks are in yellow. As you can see, the players are shooting at a rapid pace. The green mark is the average for these players in terms of FF60 and On Ice FenSh% during this period. They are creating chances, possessing the puck and trying to score, but the incredibly low shooting percentages for most of the players are far from what they normally have on the season.

This last graph shows all forwards in the NHL from 2008-09 through the present with at least 50 minutes of time on ice during a season. Their FF60 goes from left to right with On Ice FenSh% on the vertical axis. Chicago’s forwards’ marks for this season are in red. The marks in black are the same players marks from last season. The yellow mark is the average for the league during this whole period.

This season, so far, all of Chicago’s forwards have higher than average FF60 rates. The line running through the middle is the fit line. The players in the league are densely grouped around the fit line. As we move away from the fit line, we start to see more outliers. This is largely a result of allowing such small sample sizes for the players to be included in the graph. It’s interesting to note that several of the outliers in the high FF60 and low shooting percentage area of the graph are Chicago forwards. This indicates that it is highly likely that those players will move up closer to the denser grouping, i.e. their shooting percentage will correct or regress toward the mean.

While the Chicago forwards may not have much luck on their side at this point early in the season, their past performance indicates that these problems will work themselves out. Hopefully, the coaching staff will also keep this in mind and take their finger off of the line shuffle panic button as well.

*All statistics current through November 16, 2014 at noon and were collected from war-0n-ice.com