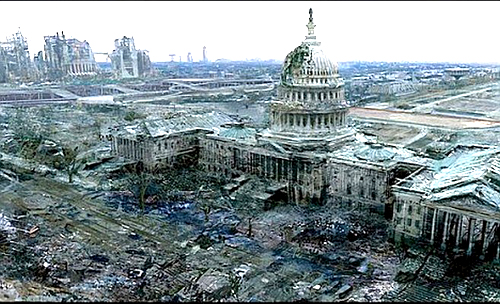 I guess it says a lot about me that I’ve always enjoyed writing about the failures of teams more than the successes. Well, “enjoyed” isn’t the right word. But the writing is better. It’s a more interesting study. There’s more layers to it, and looking forward from rubble is more interesting than just gushing about triumph. That doesn’t mean I don’t want the triumph from time to time, because otherwise I’m going to set myself on fire on the Michigan Avenue Bridge. Whether it’s the Hawks or elsewhere though, there’s just more to talk about when things go wrong for a team.

All series, I had sat here and really wondered what the Capitals would conclude if they continued to dominate this series but lost anyway. Would the panic of yet another loss, the aging of Ovechkin, the impending cap situation, and whatever other factors cause them to act rashly this summer? Or would they hold the line? Now we’ll find out.
However, it didn’t quite go that way, did it?

For 40 minutes, it had been the previous six games. The Caps were the better team, and by some margin, and Marc-Andre Fleury once again became an Avenger in net. The Penguins take advantage of one Capitals’ mistake, which Bryan Rust scores on. But still, 1-0, 20 minutes left, it’s not like leads have been sacred in this or any other series.

And then something flipped. Maybe the dam finally broke in their collective mind. Maybe they just simply froze. Maybe the Penguins were just that good, and saved what was probably their best period of the series for last. Whatever it was, the Caps couldn’t find a zone-entry. They couldn’t complete two consecutive passes. Pucks were bouncing off their sticks everywhere. The Penguins came in waves.

When the Caps needed their most, they found their least. I suppose this will be their epitaph for a while, probably for the rest of this era unless they can find the answer in the next year or two.

Because it’s the second round, because it’s the second round AGAIN, this will be viewed as the ultimate failure. In reality, the Caps lost to the #2 seed in the league by a pubic hair, really. Still, it was the #2 seed in the league without its best d-man and with their best player in something of a fog (and their second best player doing a whole lot of not much). There’s a lot to unpack there.

I watched that last night and couldn’t help but be reminded of the Roddick-Federer Wimbledon Final of ’09. If you watched it, you know that Roddick probably played better overall. He basically made two mistakes in four hours. He biffed a volley that would have put him up two sets, and then he didn’t hold serve in the 30th(!) game of the fifth set. That’s all it took.

I read a column the day after that I can’t find now, either from The Guardian or Independent, I can’t remember which, and the writer essentially said, “Federer won because he’s just better at winning matches.” Meaning he just could recognize and seize the key moments, while being beaten overall, better than anyone else.

Most of the time, we dismiss intangible things like this around here. There always has to be a reason for everything. There isn’t a mystical aspect to it. And yet I can’t help but wonder if there isn’t something that causes Bryan Rust, hardly a great player, to calm himself for just that half-second to bury the chance. It wasn’t as easy as it looked. And on the flip side of that coin, something that causes Timothy Leif, a far more accomplished player, to not be able to corral a puck when Fleury had no idea where the puck was in the second period. On such margins…

Or it was simply Fleury played out of his mind for four games. Maybe they’re both true.

It’s hard to find teams that looked this loaded, knew it was their time, didn’t come through, and then recover. I can’t help but think of the ’11 Canucks, a far less likable bunch than these Caps obviously. But the entire West fell around them and they couldn’t fuck it up, though lord knows they tried in the first round. They were much better than that Bruins team, and yet Thomas took it away from them. They haven’t won a playoff round since. Look at them now.

The ’13 Bruins were significantly better than the ’11 champs. They just ran into the one team that was better than they were. They’ve won one playoff round since.

And there are tangible reasons those things happen. Players age, the cap strips you of your depth, some players never find that career year again, other teams improve, etc. In the case of the Canucks and Caps though… can’t help but wonder if something just broke and can’t be fixed. But how do you judge that? How do you make decisions as a GM on that? It’s impossible.

The Caps won’t be the same next year, but with what they will for sure have back they’ll still have one of the league’s better teams. Maybe by keeping everything as together as you can you instill belief, that it’s just a matter of getting another spin. Or maybe you just reinforce the doubts about the same group.

I don’t envy them.

-Meanwhile on the other coast… well, the worst team got over their hurdle, didn’t they? Which is annoying.

There’s this rush to simply see the Oilers progress next year and beyond now, but I’m not convinced yet. That’s because I don’t fully trust Peter Chiarelli. Which is weird, because he constructed that ’13 Bruins team that wins a Cup pretty much any other year. But the Oilers still don’t have a blue line, really beyond Sekera and Klefbom who top out as a second pairing. We haven’t gotten the step forward from Nurse we expected. May come yet, but biological clocks ticking like this and all that. Can Talbot be this good again? And there’s the dumb Lucic contract and I wouldn’t bet against a dumb one coming for Zack Kassian based on like three first round games, and if McD gets another inexplicable season out of Maroon that could be another one. I don’t love their wingers beyond that, as Eberle will always flatter to deceive.

It’s not so smooth.

The less said about the Ducks the better.