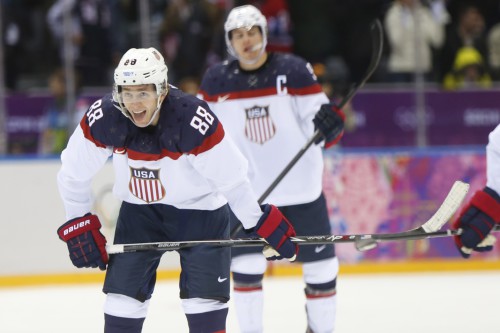 -The big debate that will rage on, as well it should, about the lack of scoring from the U.S. First off, you’re up against it when you see Doughty, Keith, Weber, Pietrangelo, Vlasic, and Bouwmeester across from you. You’re not going to pour them in, but you do need to find a couple.

Considering the expert way the Canadian defense shut down the US attack, the exclusion of Brandon Saad, Kyle Okpsoso, and Bobby Ryan should be looked at hard, not that David Poile can get fired from this job (though can we please stop pretending Brian Burke has any idea what he’s doing?). It’s all great and well to have all this speed, but it’s even better when you’re a team that can simply shuttle that speed to the outside and then swallow it whole when it gets along the wall and below the goal line, which was the only place the US had to go. And they didn’t have a lot of guys who can power through a battle or two and get the puck out front, which is exactly what Saad and Okposo specialize in. You can argue any point in a 1-0 game, but how many more board battles would the US have had to have won to get the one goal they needed?

When you’re coming up against as mobile a blue line as Canada has (Sweden’s got one too, wouldn’t have been much easier on Sunday if they got there), speed on the big ice just isn’t that important. Or not as important at the US brass thought it was. They needed some power, they didn’t have it. Instead we watched Dustin Brown and Ryan Callahan thrash about, while Blake Wheeler looked on and wondered if maybe his size and speed wouldn’t have helped.

-Again, the Canadian defensive game was utterly brilliant, smothering the US along the walls. Even the points were closed down in a hurry, so that Canada could get the puck back up against the boards where they were assuredly going to win the battle. Babcock has come in for criticism this tournament. That looks funny now.

-It applied in the offensive end as well, where the Canadian size was too much for the US to handle, especially amongst their wingers. Their defense isn’t all that big either. Just too much.

-That said, I’d swap Seabrook for John Carlson right now and I wouldn’t ever look back.

-Is Ryan Suter even going to make it to April?

-The US didn’t have too much drive from their back end either, which I guess makes the omission of Keith Yandle a question too. When you see how Doughty was able to drive through the neutral zone and not really getting that from the Yanks, you have to ask questions.

-I wondered whether Jonathan Quick was up to this. I guess we know now.

-I also wondered if one of the bigger obstacles before the tournament was going to be Dan Bylsma. It’s hard to get a team to play the way you want in such a short time, but the looseness the US had in the first 30 minutes in their own zone probably had Pens fans nodding at memories. Tortorella may be a nutcase but you have to think he would have had them tighter in the defensive zone. But that’s crying over spilled milk. I’d like to think the Hawks might get to take advantage of this looseness in June, if I trusted the Penguins to get out of the East totally.

-It always hurts to get smacked down by your team’s big brother, but considering I tilt at the Packers, Cardinals, Red Wings (in the past), it’s a feeling I’m quite used to.

-To the first game, and it was just about as cagey as we thought it would be. And Finland looked short on punch, just as we thought they might. It came down to a Karlsson power play goal, which will be a my only correct prediction in 2014.

-On what planet is Alex Edler better than Oliver Ekman-Larsson? Sweden might get away with it because Oduya and Hjalmarsson are playing so well.

-I’d be happier if Mikael Granlund was outside of the division, especially in about two years.

Anyway, we’ll be back tomorrow for a preview of the Bronze Medal game.