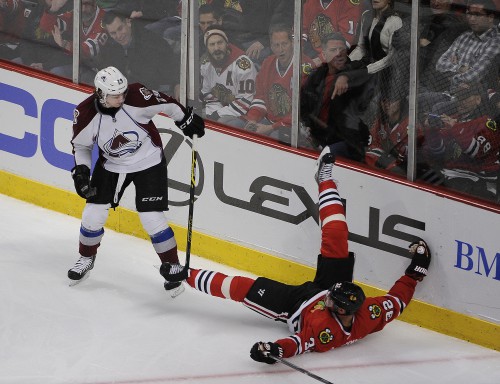 I suppose a semi-letdown after the Stadium Series game should have been expected. I’m told that our favorite go-to terms “energy,” “intensity,” and “flat” were being thrown around the postgame show, which is what all the media run to when the Hawks lost a close game. Yeah, maybe the Hawks weren’t in the red but I don’t think they were totally listless either. In fact, I didn’t really have much of a problem with the effort or the way the Hawks played. They got Maple Leafs-ed tonight, as the Avs were ruthless on two big mistakes from the Hawks. One was Keith’s misplay of a pass, and then Oduya’s pretty stupid penalty. And of course, once again Semyon Varlamov is basically the difference.

Sure, when the Hawks are a combined 1- 3-3 against the Avs and Blues — with it looking pretty likely they’ll have to get through both in April — that doesn’t feel good. It can be a little scary, even. But I don’t know if it’s indicative of how things would go in the spring. In a twist, the Blues are 1-10 against the California teams and Vancouver where the Hawks are 6-0-3. Again, I don’t know that means anything.

It’s still early March, and the Hawks showed some signs of tightening up their game. It’s got to get better, but it probably will.

-That doesn’t mean it all looked rosy, because it didn’t. Once again, the Hawks didn’t get much from their middle two lines, and despite their protestations I think this is something they’re going to make a heavy stab at repairing tomorrow. I can’t really find a scientific way to illustrate the difference between the 1st and 2nd line. One way is to look at Corsi events, as the top line produced 52 for, the second line 41. But that doesn’t seem like a good illustration. Saad, Sharp, and Toews produced 10 shots on goal, the second line only seven, but that doesn’t sound that bad. If you go by individual shot attempts from each player, the top line attempted 18 shots between the three of them. The 2nd line attempted 9, which seems a better example

But watching the game, the top line seems a constant threat and the second line only produces whatever Kane can come up with by himself. Feel free to discuss this in the comments, I can’t quite get at what I’m trying to say.

-What I did like is that the Hawks really eschewed the home run pass tonight for the most part, though that had a lot to do with the Avs guarding against that specifically. There was still too much one-on-one in the neutral zone when they really needed to chip and chase, but I suppose baby steps to the elevator and all that.

-Some will dismiss the 40 shots the Hawks tossed at Varlamov by saying they didn’t get to rebounds or create traffic, and that’s not invalid. But I don’t think they were completely abandoning the crease either, and some rebounds fell between feet instead of on tape. But it’s strange that when you’re needing more crease crashing, two of your best at it in Bickell and Shaw barely saw the ice in the 3rd.

-Keith’s been so good this year that you forget his game is kind of a high-wire act, and when he misses you get O’Reilly’s goal. But you want Keith pressing high and pressuring in the neutral zone to squeeze the play. Sometimes it doesn’t work. Maybe Crawford would like that one back but I didn’t find it egregious.

-You can only toss out Rozsival and Handzus out together on the penalty kill so many times before the fact that they’re slow hurts you.

-The 4th line was excellent tonight, and they did it mostly against possibly the hottest line in hockey of Stastny, Landeskog, and MacKinnon. You can’t argue with that.

-Nick Leddy was on the ice tonight for one shot attempt against. One. I’m no expert, but that sounds pretty good to me.

-Oduya’s penalty just wasn’t acceptable. The puck wasn’t anywhere near, and even if he was worried about losing that race, Stastny in the corner isn’t the most dangerous place he could be. There would have been plenty of recovery time.

-I thought Peter Regin looked pretty active tonight, and am interested in subscribing to his newsletter on the 3rd line some more.

-As for the Rundblad deal, something is up. You wouldn’t give up a 2nd rounder, which we know Stan values, for a guy who is just going to be your #8 d-man. Sure, maybe the Hawks scouts have spotted something they think they can bring out in Rundblad, but that wouldn’t be for this year. You feel like he’s insurance or backup to whatever might be going out the door. It’s curious. But I have no inside info. I’ll find out with all of you. We’ll have a thread up in the morning and follow our Twitter feed. Should be a bumpy ride. Whatever the Hawks denials are, it certainly sounds like they’re investigating Kesler, but I don’t think that’s the only line in the water they would have.