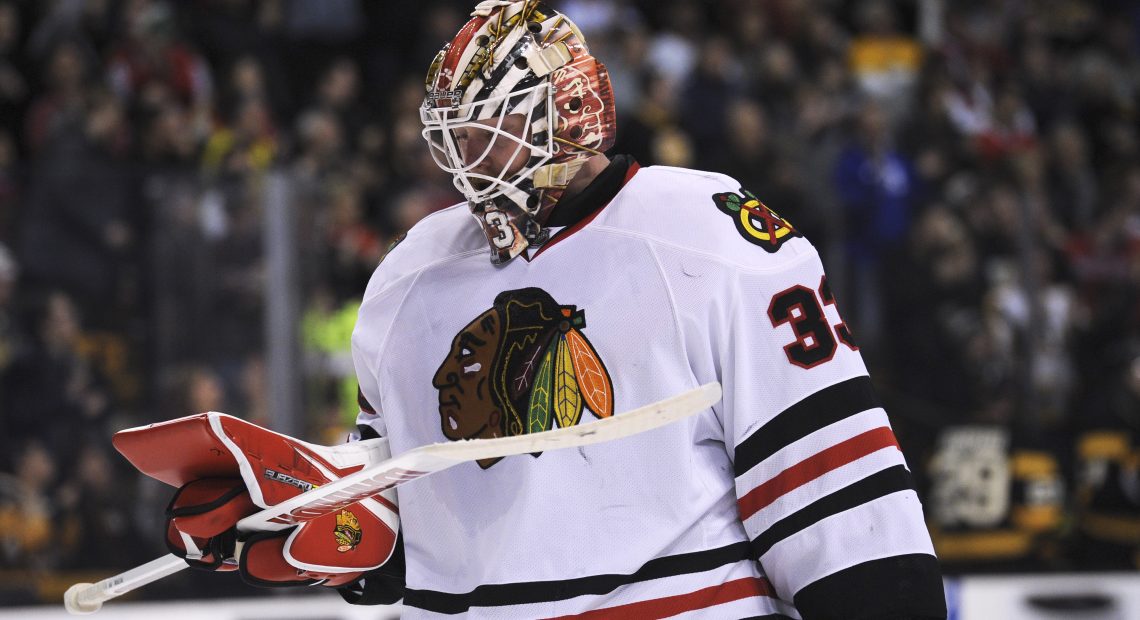 Your uncle with awful opinions loves the way the Boston Bruins play.

He thinks only the very best teams can stick check, body check, hook and slash the way they do. It’s the way hockey is supposed to be played, dammit.

And for one night, he was right.

The Bruins used a vintage road performance from Scott Darling and a very strong defensive team game to hang on for a 4-2 win against the Blackhawks. A late first period goal by Brad Marchand really was the difference in this one.

It was always going to be a tough one with LOCAL GUY Scott Darling in the second of a back-to-back against a solid Boston squad. The only disappointing part is the Hawks couldn’t squeeze a point out of it.

And really, other than Darling’s play, that was the only negative from the night.

–You got a first hand glimpse at how flexible this new lineup Joel Quenneville has. If things aren’t going well, he’s got about a million different combinations he can try to force a mismatch and swing the game back in his favor. He started around the second period when he flip-flopped Kane and Shaw. Then he moved Weise up with Teuvo. Then the line blender went into puree and to be honest, it was hard to find complaints with any of the combos.

The Hawks controlled the puck from about the midway point through the end of the game. Their best chances were either shot wide or were blocked by Boston defenders. Artem Anisimov and Duncan Keith both had golden opportunities to beat Tuukka Rask in the third as they were about 25 feet out and no one in between them.

Both shots missed the target.

On a different night, at least one goes in. Then the complexion of the game changes further.

–Patrice Bergeron drank Artemi Panarin’s milk shake all night. The second goal was a direct result of Bergeron stripping Panarin in the neutral zone (the second one of that shift).

Panarin had one shift early in the third against Bergeron where he was able to slip by him and get some space. Other than that, Panarin was mostly bottled up. This was also likely another reason why Quenneville started bouncing Kane throughout the lineup as he was baiting Claude Julien to start using Bergeron against another line.

The good news is that no one is as good as Bergeron in the West.

–If Christian Ehrhoff hasn’t entered the Quenneville Circle of Trust yet, he is very close. Late in the third, the Hawks switched up their defensive pairs to the vintage pairing of Keith and Sbarro and Hjalmarsson with a puck mover – in this case Ehrhoff.

In two games, Ehrhoff has been above and beyond what the Hawks could have reasonably expected. Tonight, he was third on the Hawks in ice time, only behind Seabrook and Keith. As I watch him, I can’t help but think this is likely what the Hawks hoped they were getting in Kimmo last year.

Ehrhoff helped set up the first goal tonight by exploding into the zone on the power play. It pushed the Bruins defense back so that when the Hawks gained control, Boston’s penalty killers were still adjusting on where to be. Meanwhile, Ladd made another perfect play in front and Toews had an easy tap in goal.

–All that said about the Hawks lineup and Joel Quenneville still cut his lineup to 10 forwards (as he should have). When Marian Hossa comes back and Kruger after that, that will be something to witness as the Hawks will be 11 forwards deep.

–Dale Weise plays hockey the way tomato cans like Brandon Bollig imagine they do while spinning yarns to any open microphone. I don’t recall the Hawks having someone with Weise’s speed, feel for the game and ability to finish a check that matters in quite some time. Maybe since Jocelyn Lemieux?

While his hands and feet leave a bit to be desired, Weise can open up quite a bit of space with the way he’s able to separate the opposition from the puck which he did twice tonight in the first period while he was still getting his feet wet with Dr. Rasmussen and the Mashinter.

–Another guy well on the way to the Quenneville Circle of Trust is Tomas Fleischmann. He played another strong game and seems to be developing quite the bond with Our Special Boy. Fleischmann’s goal was beautiful, of course, and Teuvo’s pass may have been even better.

Flesichmann also didn’t mind going into the “greasy” areas tonight as nearly scored another goal early in the third off a scramble in front of Rask. That probably means more to Quenneville than his goal did.

–As for the bad stuff – we have beaten the dead horse that is LOCAL GUY Scott Darling’s less than stellar road play this year plenty. He has to stop Marchand’s goal. That was real bad. The first and third goal you could argue weren’t totally his fault. The fourth was likely on Duncan Keith for letting Loui Eriksson get inside position.

All that said, the Hawks still had more than enough opportunities for it not to matter. This final stretch of games of the regular season should be fun. Sort of different from the past few years.

Until the next one.