I Was Bored Before I Even Began: Jets 4, Blackhawks 0 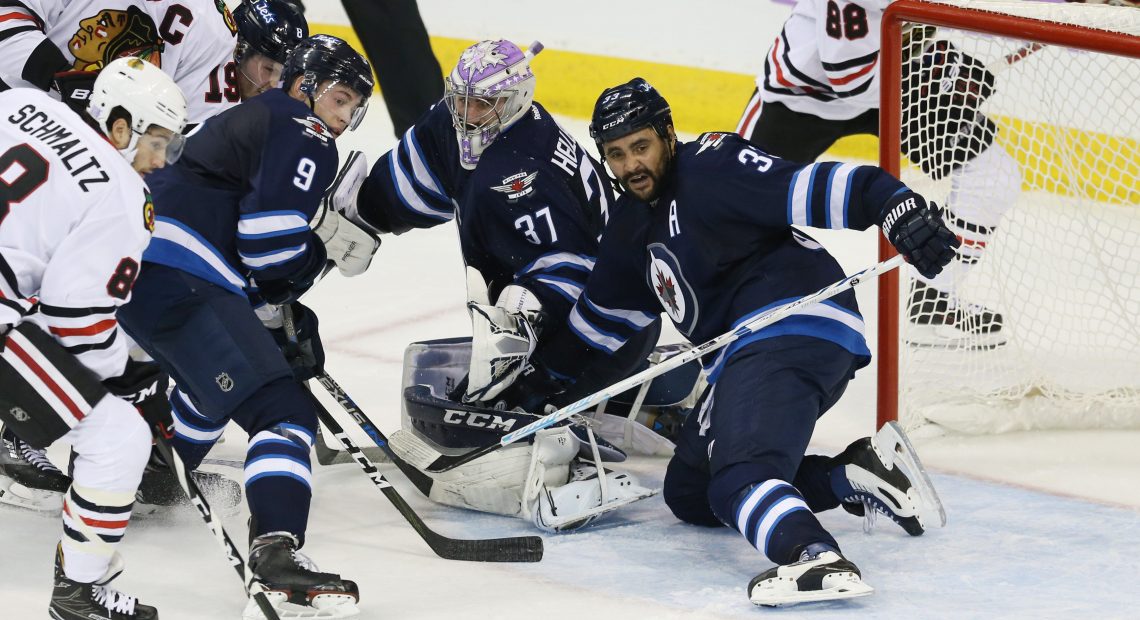 Welcome to the regular season, slog. It’s much easier to get through it when the Hawks win. When they lose, it looks like tonight.

In the first 15 games, the Hawks have won their share of games where they were fortunate to do so. Tonight was the ole’ course correction. The Hawks played a strong second period surrounded by a less than enthusiastic first and third. Instead of pulling out a victory as we’ve been accustomed to thus far, they were buried in the period they’ve been the best in, the third.

Let’s not waste any more time.

–If you want to point to a moment where the game changed, you can look at Joel Quenneville’s favorite scenario – an extended 5-on-3. The Hawks had a two man advantage early in the second period with an opportunity to tie the game. Here’s what ended up happening:

The Blackhawks set up in their classic Box+1 or whatever you want to call it. Keith and Seabrook stood on the two points on their shooting side. Kane and Panarin stood at the face-off circles and Toews was in front of the net. There was minimal movement and the only passes were back-and-forth between Kane and the defense with the hope that (somehow) the lane for a cross-ice pass to Panarin would open up. This went on for the first 30 seconds. Two forced passes later and the Jets had cleared the zone fairly easily.

The only really great chance the Hawks had was when Seabrook walked across the slot to open a passing lane for Kane for a blistering one-timer from only 40 feet away. Connor Hellebucyk made the save but it was the only difficult one during that stretch.

If you watch the play on replay, you’ll notice that Toews was also wide open along the goal line. That gave Kane two passing options in that instance and either was a good choice. The puck goes down to Toews and he can try the jam play with Panarin on the other side and Keith crashing the net.

Who knows what would’ve happened if the Hawks opened the 5-on-3 by trying to do that instead of their traditional stand-and-wait for the first 45 seconds of the two-man advantage. Alas, it is not the end of the world.

–RIP Walmart Versteeg aka Vince Hinostroza. We hardly knew ye. As was mentioned on the telecast, Josh Morrissey seemed to confuse Hinostroza with his backwards crossover in that Hinostroza thought the blue line was his to take. He looked down to pick up the puck and then Morrissey let him know he’s a human and needs to be loved.

Hinostroza was TKO’d out of the game after that and rightfully so.

–Winnipeg plays such a chaotic style of game. Dustin Byfuglien is running around like his boat is leaving the dock and he’s stuck carrying a 12 pack of Slak’s Miller High Life. Jacob Trouba is looking to maim Kevin Cheveldayoff. The Hawks probably could’ve done more to exploit this and created more odd man rushes with a quick breakout or chip play along the boards. With a full game now, you’d expect the adjustments to come swiftly in the next meeting.

–This is probably the first game of the season where you could say the Hawks were soundly defeated. It’s going to happen in an 82 game season. That being said, it was still only a 1-0 game heading into the third and there was certainly an opportunity to walk out of this with a point.

Their best players were their best players. Panarin and Anisimov had an obscene 68% Corsi. Schmaltz, Seabrook, Toews and Kane were all close behind. The only difference was nothing got behind Hellebucyk.

After Chris Thorburn’s blind shot found a top corner though, there are just some days the bear is going to eat you.

–Now it’s on to Cal and Gary where the kids are definitely scuffling. See you then.