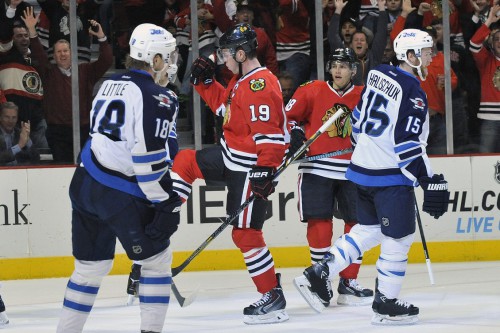 Hey, remember when we were all sad that the Columbus Blue Jackets weren’t around anymore to provide 9-12 points in the bank? They still are. They’re just called the Winnipeg Jets now.

The Hawks once again barely got out of a yawn and a stretch, and seemingly with one swipe or their arm put themselves far ahead enough of the Jets to basically put their hand on Winnipeg’s forechead and let them charge and swing and miss for the rest of the night. It really doesn’t get much simpler.

Let’s get right to the bullets:

-Let’s get this out of the way. The ass clown who nipped Adam Pardy’s helmet and then poured a beer on him should be have his face covered in meat grease and then have a badger with hemorrhoids let loose upon his face.

-Now that that’s out of the way, just a ho-hum night for the Hawks top line where they combined for a Corsi of +38, 13 shots on goal, two goals, and a +5. At points tonight, this was just a “Hey watch what we can do!”

-Quick word about the dressing of 7 D. The Hawks only have one game in five days here. Brookbank doesn’t deserve to sit. But Rozsival can’t sit so long so he goes stale. It’s a little harsh on Morin, and probably unfair to Brookbank who has never played wing, but I get it and it’s fine for a night.

While I want to see Morin get his shot, from talking to TheThirdManIn.com’s Chris Block tonight and reading Kim Wrona’s posts here, it doesn’t sound like we’re too far out from the Mark McNeill experience anyway.

-To our other kid we’re rooting for. Brandon Pirri made some nice plays in the defensive zone tonight and won more board battles than he has in previous games, and of course ruthlessly buried his breakaway. He’ll only keep getting 16 minutes a night if he keeps working that hard in the Hawks’ end. He’ll get more goals if more opposing d-men go searching for the weird naked Indian in the desert like Dustin Byfuglien did.

-I know I take too much joy from watching Buff huff and puff around the ice, but I can’t help it. While Foley was drooling all over himself about his one drive to the net and his big shot, the Buff we know and love is the one that gets beat to an icing by Nick Leddy who he had a 20-foot head start on. The one who watched Jonathan Toews with the puck in front of the net and doesn’t make a move until fishing the puck out of the net. The one who is on the left boards when he’s the right D as Pirri walks in all alone. God, it’s just glorious. He has about as much chance of making the US Olympic team on a bigger ice surface as I do.

-Speaking of Pirri’s goal, it was made by Ben Smith who had been trapped on the ice due to an icing call. But he still made it back to his own line to cause a turnover and find Pirri. That’s the kind of stuff we want to see from Optimus Grind.

-A kind word for the Jets, as Mark Scheifele once again looked dynamic. But good god does this team have no organization whatsoever. Once Enstrom and and Bogosian aren’t on the ice, it is most definitely ya-ha time.

-There’s a Sharp binge coming soon. Maybe the Circus Trip. One of those 7 goals in five games thing. It’s just going to happen.

-Saad didn’t have any points but was a +2 and was also just having his way with the Jets in a fashion that made me very self conscious about my manliness. Brandon Saad FUCKS.

I’m not sure this one has much to do with Sharp-Shooter, but I’m going with it. Patrick Sharp is your player of the game from us.