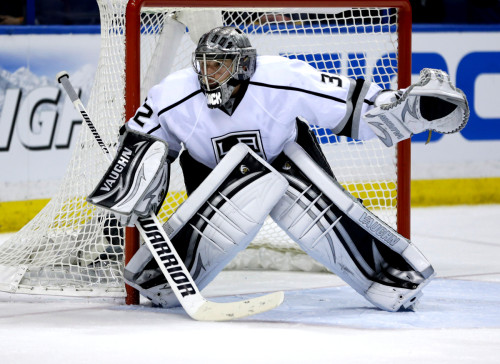 Anaheim – Ugh. As you know, I have a personal, healthy distaste for the Mallards of Orange County. The Ducks are one of a couple teams it’s hard to get a handle on. They launched Bobby Ryan finally, perhaps tired of his whining, and replaced him with the at least intriguing if not wholly promising Jakob Silverberg. Ryan’s spot on the top line looks to at least be filled at the start by Kyle Palmieri. Getzlaf and Perry will almost certainly still pour in the goals, and Andrew Cogliano and Emerson Etem will really buzz around on the bottom six — though Etem may end up on the top line before too long.

But behind that is where the questions really start to pop up for the Ducks. Sheldon Souray got seriously hurt, and the fact that matters kind of tells you what this blue line looks like. Cam Fowler is a pretty nifty puck-mover, but the rest of the crew is a legion of plodders. We’ve been waiting for Luca Sbisa to be anything other than an excuse to make Mario and Luigi jokes, and we’re still waiting.

The goaltending is questionable too. Viktor Fasth fell back to Earth as soon as Bob Murray came sprinting with yet another ridiculous contract, and Jonas Hiller wavers from brilliant to awful night-to-night. They’re probably a playoff team, but I won’t say definite.

Edmonton – Well, we know they’re good for one or two annoying wins against the Hawks, as they’re one of two or three teams that can actually outskate the Hawks. Even with Gagner hurt, there’s plenty of all skill and speed and no ass forwards. They’ve even added David Perron for Magnus Pajaarvi, which lessened their brains and balls but upped their stupidity.

But they’ll give up more than they score again. Yeah, Andrew Ference is nice but he’s a second pairing guy at best and doesn’t solve Justin Schultz marveling at the landscapes of the Rockies while his man goes right by him (though a serious power play weapon). And no one’s sure if Devan Dubnyk can really be that good again, though he might. They’re closer, but still not there.

Los Angeles – Still the class of the division, if they can be bothered. Should have walked it last year, but didn’t after taking the first weeks of the season off. Or, more to the point, letting Quick’s recovery from back surgery ruin all their good work until he was healthy. They’ll have no such problems this time. Really their only additions are Dan Carcillo, which is weird, and Matt Frattin who the Leafs are going to really regret letting go for a backup goalie. He fills in a huge gap the Kings had on the left side, and look for him to break out. They’ll also have Tyler Toffoli all season, which isn’t good for everyone else.

The back end is still filled by they wheels of Doughty and Voynov and the sledghammers of Mitchell, Regehr, and Jeff Schultz. Jake Muzzin came crashing back to Earth but we’ll be part of a third pairing rotation now to shield him. Maybe the lack of speed outside the first two mentioned will get exposed in a playoff series. But it won’t in the regular season, not with Quick back to full strength and auditioning for the starting US gig. All systems go here.

Phoenix – You know the drill here. An angry collection of proletariat and plebians who will work hard and gank a lot of points in January and and March when other teams might not be all there. It all hinges on Mike Smith, and that’s a dicey proposition. But Mikey Ribs is here now, so they’re even more annoying. They’ll struggle to score, but if Smith isn’t huffing paint again, then OEL, Yandle, Michalek, Morris, and the rest will make it hard to score on them. Bubble team.

San Jose – I have no idea what to make of the Sharks. Sometimes I think they’ll sneak up on everyone. Sometimes I think they’ll be a disaster and Thornton and Marleau are punted at the deadline. Thing is, Antti Niemi almost certainly keeps them from being a disaster if he’s as good as he was last year. No team is deeper at center then Thornton-Couture-Pavelski. Brent Burns sort of works at forward against bums, and rookie Tomas Hertl is turning some heads. Tyler Kennedy might have the most annoying face in the league and I don’t know that he’s anything more than a fourth-liner who chips in annoying goals. If you’re counting on Martin Havlat for scoring depth….well, you know how to finish that sentence.

The blue line doesn’t convince. Boyle, Stuart, and Hannan will have to drag around their oxygen tanks. Vlasic is a wonderful player but how much is he going to have to cover for? They really like Justin Braun. I guess? Still, looks like second behind the Kings is there for the taking if they want it. I really have no idea.

Vancouver – Now this has a much better chance of being a disaster. The look on the Children Of The Corn’s face when Tortorella first yells at them is going to be the GIF of the year. The secondary scoring is entirely dependent of Ryan Kesler and David Booth, both with ligaments and muscles made out of boogers. And there’s still a whole lot of dumb here. Bo Horvat piled up the points in London last year, but doesn’t everyone?

What date do you have in the first argument between Bieksa and Torts? Like next week? Him and Ham-hock are still being pushed as shutdown d-men, and they’re just not. When Alex Edler isn’t finishing his checks off his feet and with his elbows, he’s making ritalin-infected decisions. And of course, no one knows how Luongo will react to being given back the job they took away from him and he didn’t want.

And it’s not like Torts is an expert at keeping things on an even-keel. He’s going to love the media up there after their first three-game losing streak. Don’t have the Knicks, Nets, Giants, Jets, and Yankees to deflect attention in B.C., pal. I’m going to settle in for what could be a bonfire of silliness in an epic proportion.