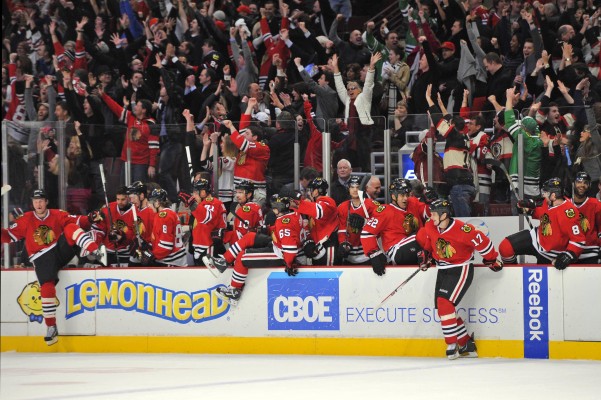 Tonight, it became clear that the Hawks know when to pick their spots. Are they intentionally doing this? I’m going to guess no. Because I doubt Q is in the dressing room telling them to do just enough to get by the Jackets. But what were the Hawks worst games this year? Against the Flames for sure, there have been three games against Columbus where they’ve been nowhere hear their best, and they were ok against middling Sharks and Stars squads (the Sharks at home).

When have they been at their best? Against the Canucks — Luongo singlehandedly kept them out once and only a 3rd period el foldo kept the other one out — the two games against the Kings, and the Blues last night. Sure, there are some exceptions, but for the most part the Hawks have specialized in doing whatever is needed to get the two points. So it was tonight, for 21.

The Hawks were pretty much dogshit tonight. Maybe that’s being a bit harsh, but they certainly did enough to let the worst team in the conference, that was also incredibly beat up, not only hang around but be right there. Oh sure, when the Hawks wanted, there were large swaths of dominance for minutes on end. But those were backed up by shifts on end where the Hawks were looking forward to lunch or dinner or whatever. But in the end, the Jackets couldn’t do enough about it, and here you go. Two more points.

– I asked McClure today when the Ray Emery bubble would burst.  Whatever you thought of Crawford coming into the year, there was no way you thought Emery would be turning into Brian Elliot of last year this go-around.

It’s not that I’m saying the bubble burst tonight, but this game was more of the kind of effort we all expected of Razor. Some big saves, just enough to give the Hawks a chance to overcome, but some vomit-belches too. The first two goals really can’t be called anything other than soft. The 3rd goal, Ryan Johansen required Emery to go from post to post, and he wasn’t there, though this was completely a result of a bad bounce off the glass and Duncan Keith going chasing Nick Foligno for reasons only known to himself.

-Get Dan Carcillo off my first line. He’s a 13th forward. That’s what he was in Phoenix, and that’s what he was in Philly. Not every coach in the NHL besides Q is an idiot, and Q’s desire to prove that is getting in the way. Brandon Saad has done exactly nothing to be moved off the top line. So stop it. The only thing I can think is acceptable is that Q wanted to give Michael Frolik someone to skate with — God knows Mayers and Bollig can’t — but if that’s the case get Ben Smith up here and stuff Carcillo and Bollig full of popcorn for the rest of the year.

-For the second game in a row, Sharp took six draws. He won half of them. Do we have to keep saying this?

-Stalberg had six shots. That’s what happens when he gets looks at bums, which he will a lot on the 3rd line.

-Since I’ve left the game, I’ve heard three Black Keys’ songs on four different radio stations. What the fuck is that?

-Good god was Kane on tonight. Deserved more than one assist. 1st period especially, Kane simply walked wherever he wanted.