Beard Of The Day – May 6th – Patrick Costello 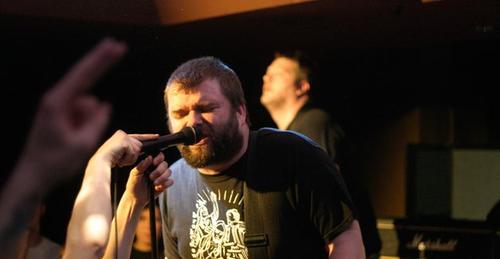 Despite being frigid in climate, the Twin Cities have long been a hotbed of fantastic musical acts for going on nearly a couple generations. From The Replacements, Hüsker Dü and Bob Mould, Soul Asylum, The Hold Steady, Atmosphere’s Rhymesayers hip hop collective, to even fucking Prince, it might have one of the higher batting averages for excellent acts of any city in the country. And no discussion of the MPLS music scene is complete without mention of local heroes Dillinger Four and their bearded (and often shirtless and pantsless) bassist and vocalist Patrick Costello.

Nearly 20 years after their first release in 1995, D4 have been consistently at the top of their game with every subsequent release, even if their last new material is only as recent as 2008 with the excellent C I V I L W A R, which itself came after a six year hiatus from their previous record, Situationist Comedy.  Both Costello and fellow vocalist Erik Funk bring bitingly incisive lyrical content to their punched-up pop punk sound, but where Funk’s voice rides in the higher range of the sound, Costello’s sounds exactly like he looks, blunted, brusk, and gravelly.

So with the Hawks’ second trip to the Twin Cities for a playoff series in as many years, tribute must be paid to one of their favorite bearded sons. Even if his tattoo might be more famous than his facial hair, respect must be paid to a band that got their hometown to all but officially recognize an event appropriately named “D4th Of July” as a municipal holiday.

Tags: Beard of the Day Beards Dillinger Four How Much Art Can You Take? Patrick Costello