Chicago Craft Beer Week is now upon us, so who better to celebrate the occasion than one of Chicago’s own brewmasters? Doug Hurst is the owner/brewmaster of Metropolitan Brewery and he, along with his fantastic team, has been making some of Chicago’s best beers in their Ravenswood brewery for the last several years. With a love for German styles,  Metro focuses exclusively on making lagers, incredibly rare for craft breweries since ales are far quicker and easier to produce.

Their year round beers (Krankshaft, Dynamo and Flywheel), are all incredible examples of what American craft has to offer for traditional German beers. You’ll personally find me drowning myself in Krankshaft just about every time I head to The Whirlaway for any Hawks game. I’ve written about it in our game day program before but it really is a perfect beer for watching a hockey game. Only 5% ABV, it’s light and easy drinking with a taste of light hay, lemon and touch of sweetness, you’re able to put down many of them without really losing your head. Not to say I haven’t tried. Metropolitan’s current seasonal is Arc Welder, a dunkel rye lager, which is especially great for this weather since it refuses to actually get warm.

While visiting Cologne, I once almost got my ass kicked by several incredibly drunk Germans for insisting that while their city was great, Chicago was better. Now is the time to prove it. There are plenty of amazing events going on for the next week surrounding craft beer in our city. Come out to Sportsman Club on Saturday and I’ll likely buy you a beer. Drink craft, drink local, celebrate one of craft’s many bearded brewers. 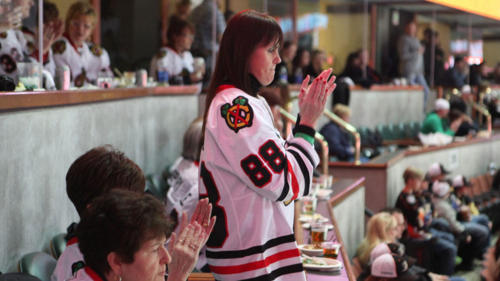