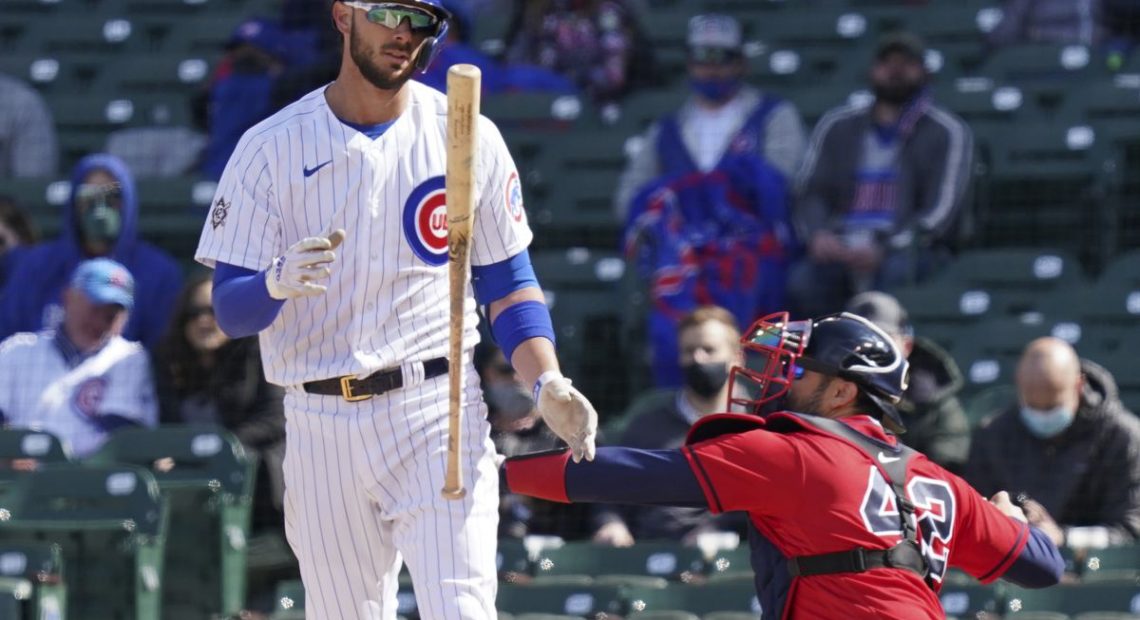 Well, it’s official: the Cubs are at the bottom of the division standings. Of course, the NL Central is so bad that that doesn’t really mean much, still putting them “only” 4 games back of the leading Brewers, but it’s still not good nevertheless. Our offense is still inconsistent, our pitching still sucks, and because of that we keep losing blowout games. Let’s go over what happened this week.

Well, I predicted this game was gonna be a bit dicey, and that’s exactly what happened. The Cubs, though getting close offensively, never led this game, and the Braves were able to hold through for the win.

Speaking of dicey, Zach Davies (9.47 ERA) had yet another bad start, and Cubs fans’ patience with him is really starting to wear thin, especially considering we traded away Yu Darvish (2.27 ERA) to get this joker. It takes a special kind of pitcher to allow the other team to go up 4-0 on nothing but walks, doubles and singles, but here we are. The Cubs are a team who has convinced absolutely nobody about their offensive abilities, and they would never come out ahead after this 1st inning.

Speaking of offensive abilities, Javier Baez sat out this game because of hamstring soreness, meaning Nico Hoerner started at short and a FUN mixture of David Bote and Eric Sogard started at 2nd. These two guys have .189 and .231 batting averages, respectively, and combined for 0 hits on the day.

The Cubs were actually able to tie things up in the 3rd inning, as Kris Bryant is officially Not Injured and therefore Back as the best player on this team. He hit a grand slam to tie it up, after two singles from Davies and Hoerner and a walk from Anthony Rizzo. However, in the bottom of the 3rd the Braves got a home run of their own off Davies to retake the lead, and they’d never give it back.

By the 4th inning it was time to bring out the bullpen, which means nothing but pain and suffering defensively for the Cubs. After Davies walked two batters, Dillon Maples came out and got out of that inning with minimal issues. Replacing him in the 5th, however, was Brandon Workman, who was not working at all. After a double, a Willson Contreras passed ball, a walk and a home run, it suddenly became 8-5 Braves.

The Cubs staged a mini-comeback in the 7th after a walk and a Contreras home run to make it 8-7, but the Braves ended up closing out the inning leaving two Cubs on base. The game was pretty much shut down after that.

Baez sits for the second straight game, and even more concerning is that Kris Bryant is sitting, too. Apparently his arm’s been bothering him since he played in 30-degree weather. Who could’ve guessed that without him the Cubs offense would suffer this season?

Hometown Boy Trevor Williams started this game, and honestly did pretty well on the mound. He tied his career-high by striking out 8 batters this game and kept the game scoreless for 4 innings. It’s just too bad the Cubs offense couldn’t help him out; he ended up getting the loss after allowing a solo home run, a walk and a double to score Freddie Freeman.

The Cubs offense was atrocious, getting only 2 hits all game (from Hoerner and Jake Marisnick, of course) and striking out 13 times, putting them one shy of their season-high. The Cubs also only had one walk and left 6 runners on base all game. We watched a slew of bullpen pitchers throw some innings, yet only Workman gave up runs, again — three in 0.3 innings to lose the game. He now has a 6.75 ERA and I’d much rather enjoy never seeing him pitch again.

If you thought things couldn’t get any worse, they certainly can. Kyle Hendricks, supposedly our #1 ace out of the bullpen, still sucks out loud. He only played 3.2 innings, and yet during that time he gave up 11 hits and 7 runs (3 of them home runs) for an atrocious 7.54 ERA. Alec Mills came in to relieve him and he was similarly bad, allowing 5 hits for 3 runs (two of them homers), and only being able to strike out two batters in 2.1 innings.

After being down 10-0 in the 6th, clown world ensued as David Ross decided his bullpen is so bad that he’d might as well allow position players to pitch for no god damn reason. Rizzo and Duffy split an inning pitching, whereas Sogard got an inning all his own. What used to be an amusing time to watch Rizzo on the mound very quickly just became annoying and seemingly so ridiculous. Even more ridiculous were the quotes at the end of the game, saying it helped lighten the mood. But the mood shouldn’t be lightened because the team sucks, and somebody needs to do something about it and act like everyone’s jobs are on the line as a fire sale is imminent at the trade deadline.

But at least he struck out Freddie Freeman!!!

Meanwhile, only 5 hits were made all game for the Cubs, and a staggering 13 runners were left on base. 11 strikeouts happened, led by David Bote who struck out three of his four at-bats. Matt Duffy, who played in four different infield positions today, was one of only five Cubs batters to NOT strike out this game, adding onto that a hit and two walks. Bryant also had a better game, leading the team with two hits and being left on base three times. God save us.

The fact of the matter was the Cubs had to win sometime. This time it happened to be against a pitcher at the bottom of the Braves’ rotation with a 5.00 ERA, but a win is a win, especially for this team.

Javier Baez is finally back, just in time to snag a hit, a run, an RBI and NO strikeouts! He was able to RBI in Duffy and get Bryant to third base in the 3rd inning to put the Cubs up 3-0. With Jason Heyward singling to score Bryant after, the Braves didn’t stand a chance of coming back.

The Cubs did all this mostly with contact hitting on the ground. There were singles and doubles galore for the Cubs this game, and Marisnick got the only home run for the Cubs, scoring only himself. Don’t look now, but Marisnick’s batting average and OPS are third best on the team, behind only Hoerner and Bryant. His sample size is a little smaller, but I’d still like to see more, please.

Finally Adbert Alzolay has a good outing. He was able to pitch 6 innings, his highest of his four starts this season, and only allowed 4 hits and 2 runs. He only walked one guy and struck out six batters for a 4.71 ERA. (This is good for the Cubs rotation nowadays.) The bullpen stood behind him pretty well, as Tepera, Chafin, Megill and Kimbrel combined to only allow three hits and one run as the defense was able to stand tall behind them.

At least this series was ended on a positive note, but there’s still not a lot to like here. The offense is maddeningly inconsistent, and when it’s off, it’s awful to watch. Legitimately horrendous baseball. I’m not sure how it gets fixed. You shouldn’t be relying so heavily on a utility guy for hits, but that’s where we are right now with Marisnick.

Anyway, the Cubs are playing the Reds this weekend, the second-to-last team in the conference. The Reds just came off a series against the Dodgers in which they actually won, impressively. However, on Wednesday the Dodgers did beat them 8-0. The Cardinals and Diamondbacks have also walloped on them too in past series. It’s the battle of the bad teams; let’s see who comes out on top.