Another World Awaits Us – Blackhawks 5, Wild 3 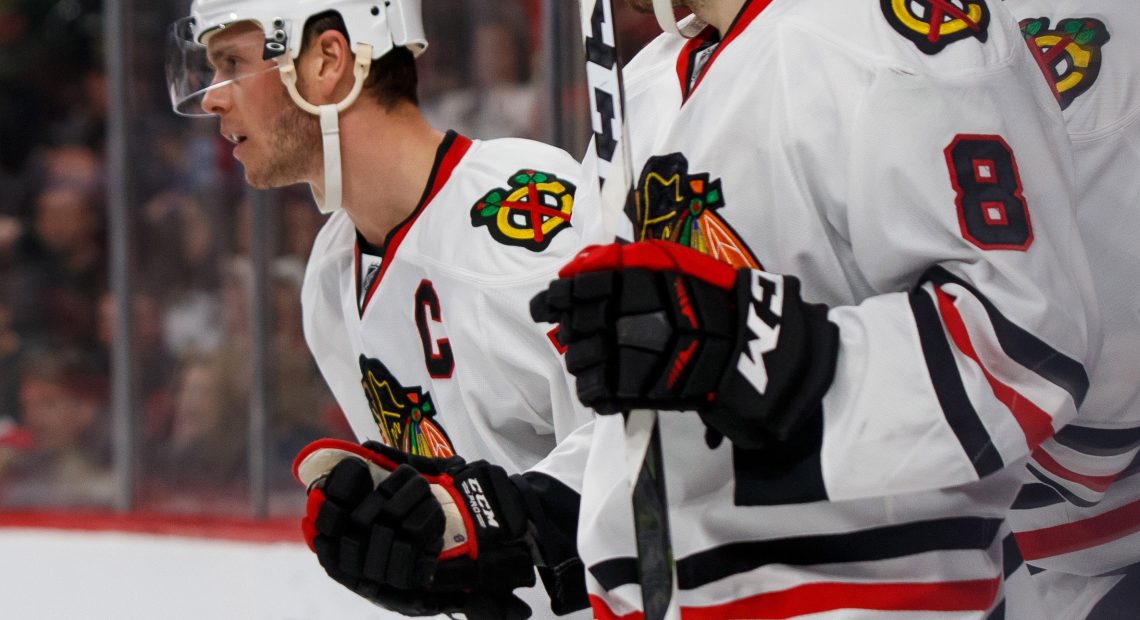 Here’s one way to beat Devan Dubnyk – shoot the puck when he’s not looking.

The Hawks scored twice in the third period and caught Dubnyk with his proverbial pants down each time. The first goal was off a face-off where Nick Schmaltz collected the puck and fired it towards the net in one motion. Dubnyk had no idea where the puck was.

A few minutes later and after an annoying Zach Parise goal (are there any other kind?), Schmaltz made another nifty play by giving a no-look, behind the back pass from below the goal line. Dubnyk was tracking the player instead of the puck and by the time he realized the puck was on his left side, Toews was chipping it past him.

This gave the Hawks a 4-2 lead. Of course, the Wild came back because that’s what they do. Corey Crawford was there and Toews finished off his virtuoso performance by scoring an empty-netter from 150 feet away.

Other things that came to mind…

–The Round Mound of Minnetonka Bruce Boudreau is an easy punching bag and tonight was a great example why. Visitors to this site know that Mikko Koivu drinks Jonathan Toews’ milkshake on a regular occurrence. So tonight, Boudreau decided to give Erik Haula’s line a chance to match up against him for…reasons.

Maybe Boudreau was experimenting or tinkering to see what they could do in a future playoff matchup. But I think the answer became crystal clear in the second period after the Toews line scored twice on back-to-back shifts. As we’ve seen for the past decade…when Boudreau is asked to adjust a gameplan in-game, he is unable to.

–The Wild are a very quick team and play just as fast but as McClure noted during the game, there is no structure in their breakouts or in the offensive zone. A typical Wild offensive sequence consists of firing as many pucks on net as possible from whatever angle is open and/or going high to low.

This will lead to the occasional annoying goal but when they play a team that is disciplined and well-structured, it will also lead to periods like the second where the Hawks quickly snuffed out any chances and counter-attacked like crazy. All four lines dominated in the second period and the Hawks very easily could’ve put the game away then if it weren’t for a few excellent Dubnyk saves.

–The Kid line of Vince Strohs-Kero-Hartman was extra grindy tonight and probably deserved scoring a garbage goal. For the first two periods, they had the Wild pinned in their zone and behind their net. Their shifts felt like 50 seconds of Hartman and Hinostroza continually skating behind the Wild net and pushing the puck to the slot where two or three point blank shots were fired at Dubnyk. Against lesser competition, they’re probably rewarded with at least a couple of goals.

–So maybe worrying about Jonathan Toews was a little silly. Also, I’m dying to see how Boudreau tries to match up against his line in a 7 game series. Sadly, the Flames will beat them in 7 so we’ll never know.

–At least the officials got tonight’s illegal Parise no goal call right. Parise scored midway in the third after batting a puck out of the air that was nearly over his head. The official made the no-goal call immediately and there was no need to even review it.

Had the league got the offsides call right two weeks ago, the Hawks would’ve taken 4 of the last 4 points from the Xcel Center. Alas.

–Not to only shit on the Haula line but Scandella and Dumba were absolutely scorched by the Hawks to the tune of a combined -26 Corsi. And Boudreau couldn’t wait to put both of them out there when Suter and Spurgeon were off the ice.

–The Hawks take on the Yotes on Thursday. We’ll see if Arizona leaves any of their players here after the game.