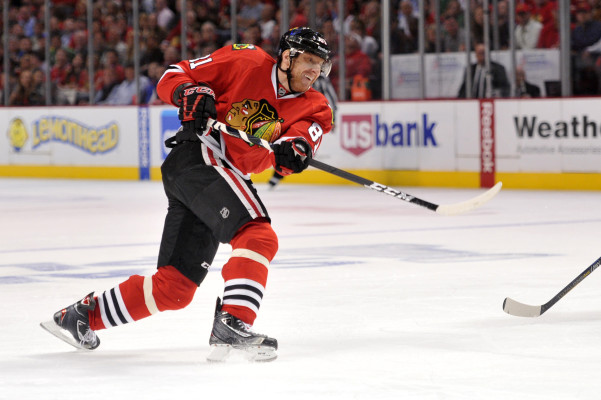 Ok, quick announcement. I honestly thought up until last night that camp started today. And then it struck me as weird that I wasn’t seeing any tweets about South Bend, or about camps anywhere. Only then did I bother to actually look it up again. So it’s next week. Huh. Well what do you know?

So because I was all ready to work on an issue, there actually will be a Bears Preview (sorta) edition of The Indian tomorrow. Keep an eye out.

How will the team handle the elderly over a full season (Hossa, Rosival, handzus) – Mighty Mike D

To me, this is a great question and a true test of what Q has learned from ’10-’11. As we remember then, when Q had a roster he deemed….incomplete let’s say, he decided to ride the ones he did trust awfully, awfully hard. You’ll remember Toews, Kane, Keith, Seabrook, and especially Hossa getting an absurd amount of ice time per game. And then there were some games where they simply had nothing in the tank. Sharp got hurt to complicate things even more.

You could extend this question now to Keith and Sharp, who are over 30. There are a few things I’d like to see done for the top end elders. First, at least until March, I’d like to see Hossa off the kill. I know it sounds silly to fuck with a unit further after it’s already lost Bolland and especially Frolik (though Bolland didn’t actually kill that much last year). But you have to shave Hossa’s minutes somewhere, especially if he’s going to Sochi. And he is.

With Kruger, Smith, Shaw, Saad, Toews, you’ve got five forwards and for a lot of penalties Q just rotated through four. Morin killed penalties in the Rock last year if he makes the team. Bickell wouldn’t be the worst idea, though might be a little leaden-footed. When Handzus plays Q hasn’t hesitated to get him a shift on the kill, if only to win a draw. You could rotate the sixth slot around if need be.

On the flip side, and this will never happen, but get Keith off the power play. He’s not really doing much on there, and Leddy should be the #1 QB now anyway. It makes for a hole on the second unit obviously, but it would allow Q to get creative. Maybe have Seabrook on the second unit. Or let Pirri QB it? Like that would ever happen. It’s hard to do, but with Keith having reached the peak of 30 years on this planet and now beginning the descent (not effectiveness wise, just metaphorically. EAT MY METAPHORS), it’s worth looking into. Considering Hammer actually has a bomb from the point when he gets time, is it worth giving him a shot as a trigger-man somewhere?

Sharp shouldn’t kill penalties regularly, which would only leave a handful of players who play on both special teams for sure (Toews, Seabrook, Saad….and that really could be it).

As for Handzus, he really shouldn’t play more than 60-65 games. Q will have to go without his binky, and we know how he feels about that. But there’s no way he’s getting through 82 in four pieces, much less one. And he shouldn’t be asked to do more than 12 minutes a night on the 4th line. When he comes out, Smith or Shaw can easily fill a 4th line center role for 20-25 games and 10-12 minutes a night. That should keep Zus as fresh as you would hope for in the spring.

Look for Rozie to again platoon with Brookbank, or a Piggy who makes a splash/fills in for injuries (Stanton, Clendening, if Olsen can un-fuck himself, that sort of thing).

But mostly this will all be a test to see if Q is more interested this time in growing a roster through the season, with all the bumps that come with it, and sacrificing some points in the regular season for a better team when things count. Basically, he’s going to have to find his inner Popovich. With the new set-up, Western Conference teams don’t have to be balls out from jump street to get to the playoffs. Even if St. Louis doesn’t collapse as I hope (and half expect) and ends up winning the division, that’s hardly disaster. The Hawks would really have to try to finish any lower than 2nd. There’s room to play with here and try stuff if Q is so inclined. And we know he is.