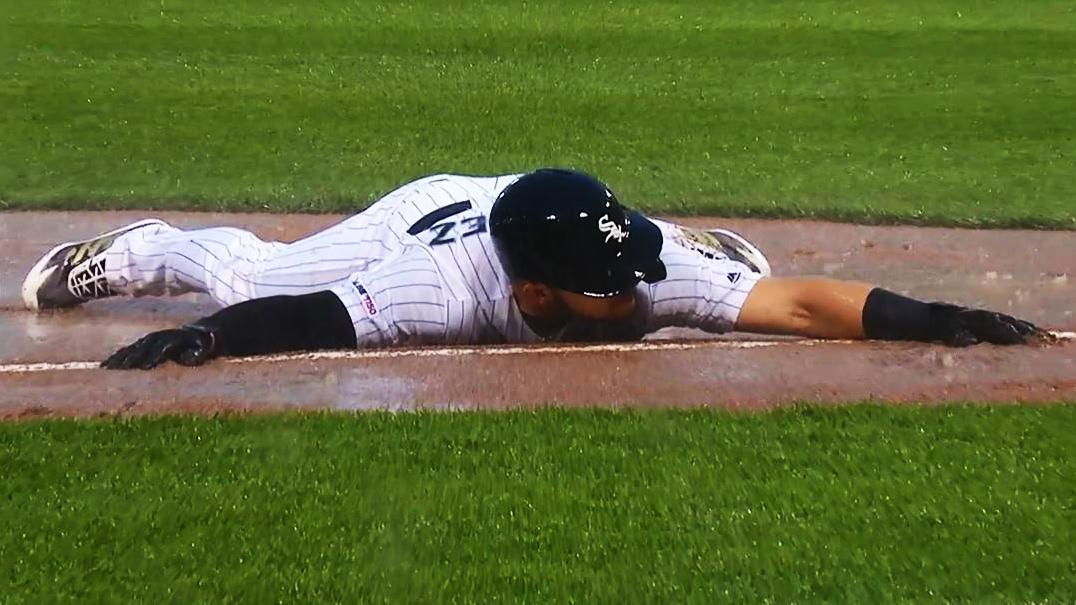 In a rebuild, sometimes there are fan favorites who get left behind as the younger and more serious players are moved in. There was hope that Yolmer Sanchez would be the upset this year, a player not originally supposed to be part of the Sox upswing, could carve himself out a role when the games matter again. Yolmer didn’t really do that, but he might not have lost out totally either. Let’s run it.

Tell Me A Story: Coming into the season, the hope must’ve been that after two full seasons on the Southside and entering his prime years at 27, Yolmer would see a jump in his offense to go with his above-average defense. And hey, his walks improved! That’s like, something, right? Sadly, the rest of his offense collapsed.

Two years ago, Yolmer managed 12 homers and a .400+ slugging, which for a third middle-infielder with a plus-glove would be almost a bonus. However, even with the flubber-ball in use this season, Yolmer homered exactly twice and slugged .321, which is like Patches and Poor Violet porous. Worse yet, Yolmer had a sub-30% hard-contact rate, so you can’t even argue a shred of bad luck for him. The mud is getting deeper here.

There was a difference in approach for Yolmer this year, as he was focused on going up the middle and the opposite way. Or he just couldn’t catch up to a fastball, your pick. But for a hitter like Yolmer who isn’t hitting the ball very hard, going up the middle and the other way can lead to even more soft contact and easy grounders and flares to a severely unimpressed and bored right or left fielder.

Another big difference for Yolmer this year was he simply couldn’t handle fastballs, and if you can’t do that you’re pissing up a rope. He hit .295 on fastballs in 2018, and that dropped to .201 this year. His work on everything else was acceptable-to-better, but if you can’t deal with a fastball that’s all you’re going to get, because most every pitcher in the Majors can execute a fastball (unless you’re MY GUY Dillon Maples).

As a left-handed hitter. Yolmer developed a hole in the upper part of the zone, which again, can quickly become death. For the visually-inclined: 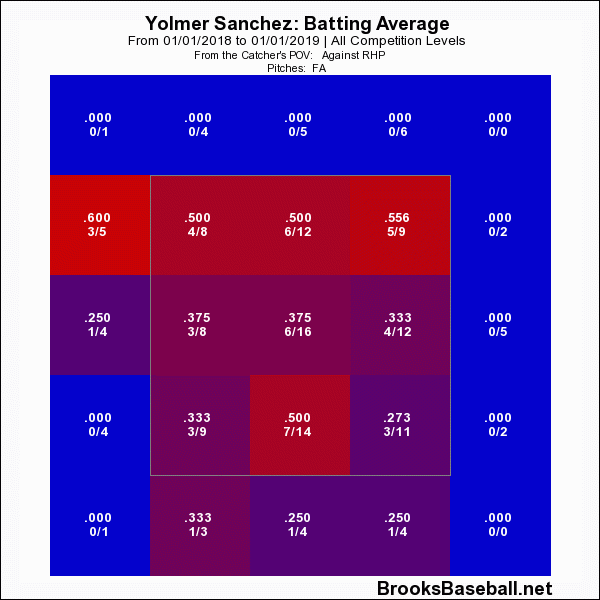 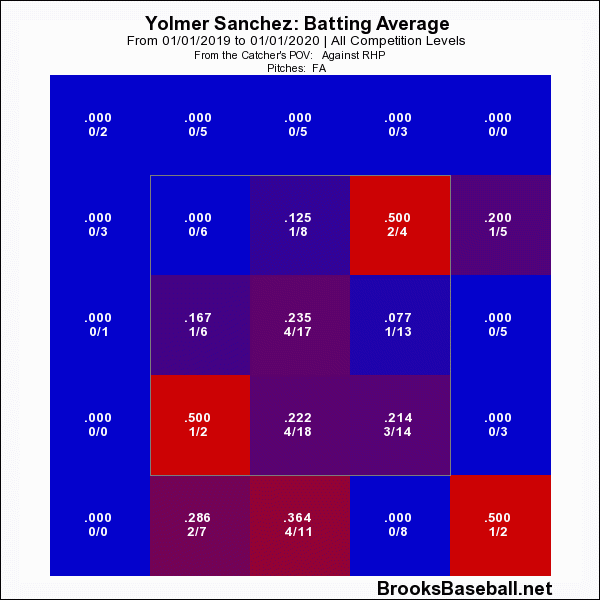 Yolmer also saw huge jumps in the amount of whiffs at the top of the zone either middle or inside as a lefty. Whiffs above the zone you can live with. In the zone, well, you’re basically signed on for a pretty shitty year. Which is what Yolmer got. It was also a problem right-handed as well. Still, Yolmer was able to handle fastballs much better from the right side, hitting .317 against them then. He also had a an even 100 wRC+ as a righty, which may indicate where his future is.

Still, there’s nothing wrong with Yolmer’s glove, which is probably going to keep him in a job somewhere. Of all qualified second basemen, Yolmer had the best DRS in the American League and only trailed Kolten Wong in the whole of MLB. Considering he can fill in at third too when needed, he’s a good glove to have. Especially for a Sox team that could get a little goofy defensively.

Welcome Back Or Boot In The Ass: That arbitration figure is getting awfully high for a player that appears more and more to be glove only and is about to have his full-time job taken by Nick Madrigal. Which would make him an excellent candidate for a non-tender. He would be a nice security blanket late in games, but are you paying over $6M for that? Seems a stretch. Which sucks, because every team needs a guy with some goofy eyewear.