All The Boys In The Band Know How To Get Down – 2019 White Sox Player Reviews: Reynaldo Lopez 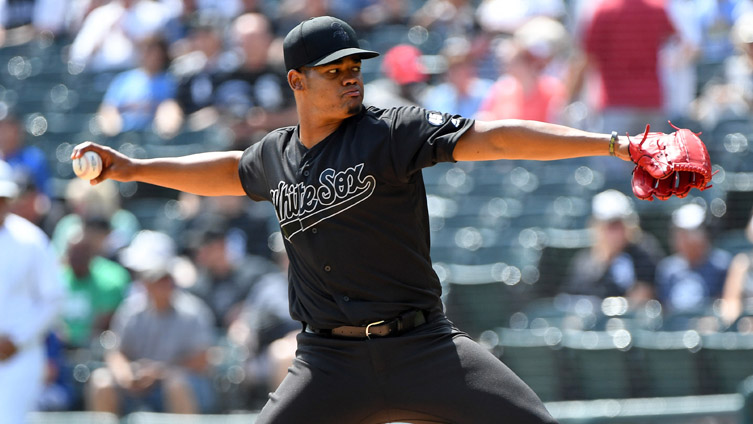 As AJ said yesterday, the hopeful and wandering eyes (ewww) of Sox fans are going to turn from Lucas Gioilito to Reynaldo Lopez next year. Is Lopez a candidate for such a turnaround? Let’s get in up to the wrist.

Tell Me A Story: It was something of a strange year for Lopez, as in a lot of ways he had the same exact year as he did in 2018. And in some ways better, except without any of the results or numbers that would agree with that. He struck out slightly more hitters than he did in ’18, he walked slightly less hitters. He got ever so slightly more ground-balls, and considering what the baseball was his hard-contact against was essentially the same. And yet his ERA jumped nearly a run and a half and his FIP almost half a run. What’s going on here?

Some of this is luck. Lopez gave up more homers simply because more of them floated out of the park, which happened to just about everyone this season (at least not named Gerrit Cole). Whereas his fly ball-to-homer ratio previously was under 10%, it rose to over 14% this year. But Lopez didn’t give up hardly any more flies than he did previously, nor was the contact on them any more lively than before. They just ended up in places in various parks that were homers where they didn’t before, which is essentially just kind of random. Lopez wasn’t helped either by a dip in his left-on-base percentage, which is just sequencing. His 69% mark is three to four points below league average, and could just rebound simply because next year. More solo homers instead of them with men on would improve his ERA and such, without him actually doing anything differently.

Still, that’s not all of it. Lopez’s stuff suggests he should strike out more hitters than less than one per inning. And yet he doesn’t. Lopez’s fastball velocity ranked in the top-10 of all starters this year. The guy behind him was Max Scherzer. The guys ahead of him were Marquez, Alcantara, Castillo, Buehler, Wheeler, deGrom, Cole, and Thor. Almost everyone of them have much bigger K numbers than Lopez, and if not that than better success. Why so?

The easy answer is that they have better offspeed and breaking pitches, but that’s only partially true. The thing with Lopez’s fastball is though it’s one of the hardest around, it doesn’t get the whiffs you might think: 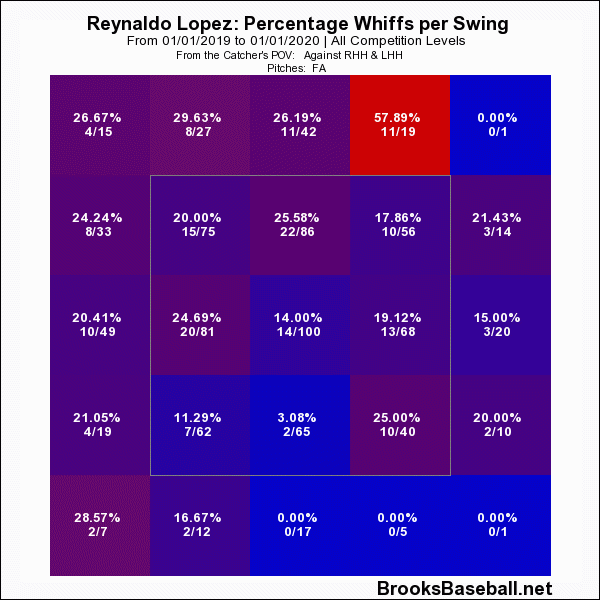 With Lopez’s velocity, you want him living at the top and above the zone. But all the other pitchers mentioned get whiff-per-swing rates in those six spots in the 30% range or 40%. Some even 50%, which Lopez has only in one spot and is probably more due to a weird spike than any skill. Maybe hitters just see Lopez’s fastball better than those others’. Maybe he needs some more deception in his delivery, but considering he’s throwing 95-97 regularly he should be blowing that pitch by hitters more often. And he’s not. And that’s a bigger problem because it’s still the pitch he goes to most often when ahead and with two strikes.

Lopez has good breaking stuff, but they don’t seem to come out of the same plane as his fastball. He mostly keeps his fastball up int he zone or above, but his slider breaks from the middle or low in the zone and out. Hitters can pretty much suss out when it’s not up it’s not a fastball, though they still offer and whiff at a decent amount of them. Though hardly a heroic amount. When pitching to lefties, his change still comes out of a lower plane as well. Perhaps using his curve more, which does come out of his hand looking higher in the zone, is the key. Or given how hard he throws, not being afraid to use the middle of the zone more often on the edges, and then the slider and change will look a little different. Clearly the tools are there.

Welcome Back Or Boot In The Ass: Well this is obvious. Lopez will be part of the rotation next year and hopefully for a good long while after that. And seeing as how he’s put up over 180 innings his first two full seasons, his durability will be needed in a season where the Sox don’t know what they’ll get from Carlos Rodon or Michael Kopech in terms of innings. He’s clearly the next project in the Giolito mold, how they can unlock what is clearly a lot in that closet. Feels like a delivery tweak is coming for him too to give him more deception and to make sure that fastball gets on hitters instead of them seeing it the whole way. Lopez will be 26 next year, so there’s still time but there isn’t the oodles of time it might feel like. If they can boost him as they did Giolito next year, then the games might matter in August again.