All The Boys In The Band Know How To Get Down – 2019 Sox Player Reviews: Eloy Jimenez 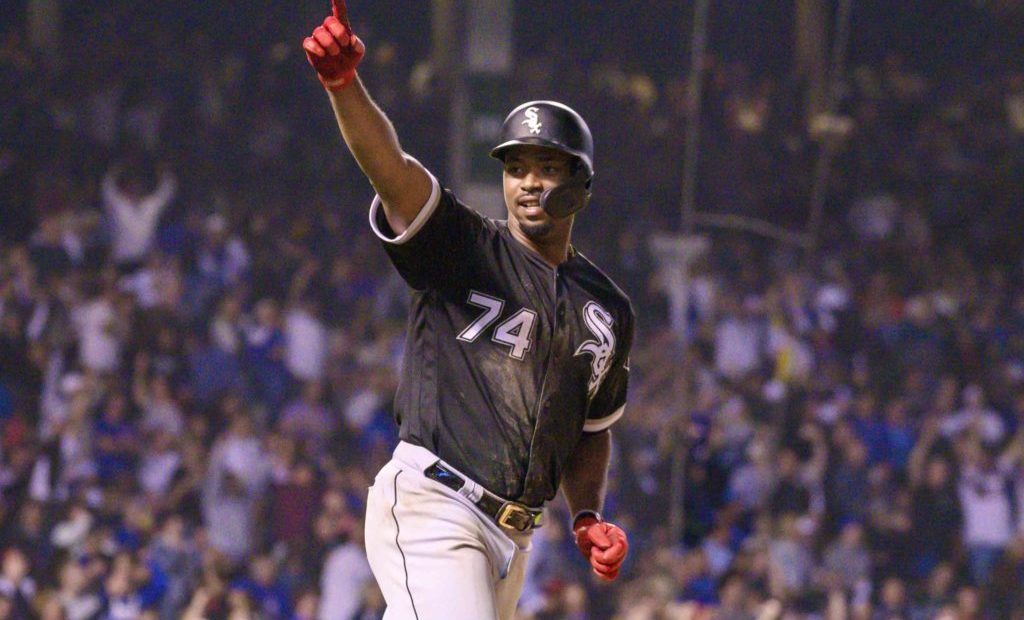 We continue on our adventure through the White Sox’ exclusive group of players that will actually matter in the future, this time bringing us to Eloy Jimenez and his beautiful smile. Let’s just get to it because I am excited.

Tell Me A Story: The White Sox played hardball with Eloy Jimenez and the service time game in 2018, leaving him in AAA even after it was obvious in May of that year, when he was in AA, that he was MLB ready. The Sox even went far enough to burn an option year (not that they will be important) by sending him down to AAA camp a few weeks before opening day. That remains a curious move to me, because they were obviously negotiating a contract extension with him at the time, so it was unnecessary. Even if he hadn’t signed that deal, they could’ve sent him down at the last second. The option won’t matter, but it was still weird.

Regardless, Eloy signed and was in the opening day lineup, deservedly. He spent most of the early season hitting in the 5-spot, and kinda bounced around between there and the 6-spot most of the season. Near the end of the year, as he really came on (more on that in a moment), he started to hit cleanup more consistently, but he only even hit higher than that twice in his 122 games, hitting second once in late May and third once in early September. He also hit seventh a handful of times, but we will pretend that didn’t happen because realistically it never will again.

Moving toward the actual on-field performance, let’s start with the bad. That’s because there isn’t much so we can get through it quickly. The defense needs work. We knew it would be an issue, but we didn’t necessarily know it would be as big of an issue as it turned out to be. There were some slight improvements if you squint hard enough, but not enough to overshadow the fact that he injured himself on an ugly defensive play – TWICE. Reports indicate he works hard with the coaching staff to improve his defense, but this may always be an issue. Still, it’s far too early to give up on Eloy as a fielder, because you’re gonna need him to be able to play out there. It’s far too soon to seriously consider a full-time shift to DH. He’s only 22, after all.

Eloy got off to a slow start, and that could be putting it quite generously. Through May, he was hitting .220/.273/.390 with a wRC+ of 75, while striking out 29.5% of the time. He also had just 6 homers in that time. I didn’t go dig up the numbers, but I remember that in those first two months pitchers were taking advantage of his aggressiveness and just eating him alive with hard sliders low and away that he just couldn’t lay off. Eloy was far too good of a hitter to ever be challenged by minor league pitching, so seeing that happen early on was slightly surprising, though not necessarily discouraging. The talent and power were still there, he just couldn’t force pitchers to throw him fastballs yet.

August and September were where he really shined, though. Truthfully, the real Eloy Jimenez stood up in the final third of the season, and he smashed his way to a .308/.342/.575 line with a wRC+ of 140. His hard-hit rate climbed to a mean 42.1%, and he had an identical medium-hit rate, meaning he was making paltry contact less than a fifth of the time, a huge improvement from the early aughts where it was more than a quarter of the time. And it showed up in the stat line, as he smashed 14 of big flies in these months, which is damn near half.

In total, after the first two months of the season, Eloy hit .284/.331/.557 with a wRC+ of 131. That is, as they say very fucking good, and pretty much in line with what a lot of people expected from him. When we did our season preview roundtable for the Sox, I said I was expecting a .270 season with 30+ dingers, and I was pretty much spot on. All in all, Eloy showed every bit the promise we were dreaming his bat could have.

And oh yeah, he did this at Wrigley.

Contract: Signed through 2024 on a 6-year, $43-million contract that includes team options for 2025 and 2026. Those options reportedly push the total value of the deal close to $80-million.

Welcome Back or Boot In The Ass: Another easy keeper here. Eloy should be hitting third or fourth in this lineup on opening day for the next seven years at least, and hopefully more. Rick Hahn mentioned right field as a need area this offseason, and the Sox have been heavily linked to J.D. Martinez rumors so far (make of that what you will), so it’s safe to say they don’t view his defense as a problem and are writing him into the roster as the starting left fielder as well.