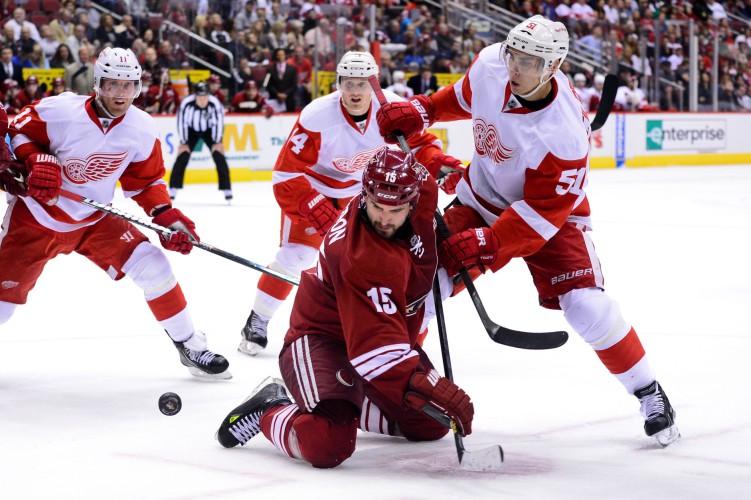 Even though we’re still wringing out the beer and champagne and tears from our shirts and jerseys, the world of the NHL waits for no one. After Sunday’s draft, the pedal stays to the floor as free agency opens on Friday. Though the Hawks promise to not be big players, or maybe even players at all, that doesn’t mean there aren’t holes to fill. Most likely, Stan will do what he did last summer and wait for the market to bottom out and pick up someone on the cheap, which is how Michal Rozsival ended up here. There are some names that are worth studying for Stan, though.

We’ll start with the men in the middle, as one just went away. It’s obvious that Stan wants to plug Brandon Pirri in there to start next year with as much as he’s mentioned him to the press. Either that, or he’s just bluffing for some purpose yet to be determined. That slots Shaw and Kruger behind him, but the Hawks might be better off getting a veteran to move Shaw to wing to make up for the loss of Michael Frolik. There are some options.

Let’s clear up some fantasies here. Vinny Lecavalier, Danny Briere (who hasn’t played center in a while anyway), Derek Roy, and Mike Ribeiro are not going to show up at The Convention at the end of July. All of them will want multiple years and a lot of money, neither of which the Hawks have available. Even if you’re not a believer in Pirri, and he has a lot of convincing to do to most, that doesn’t mean the Hawks don’t want to hold that spot for any of Danault, Teravainen, or McNeill. Teuvo especially makes the Hawks brass giddy. Pirri or not, whoever is there next year is a bridge to that generation in a year or two.

Obviously, this is the name we’ve been harping on for a while. Most of it stems from watching this guy kick the crap out of whatever Hawks center he faced last year in the playoffs. First off, he wins a fuckton of faceoffs, which the Hawks are still short on. He’s been around 57% the past two years in the desert. Gordon was used as the primary checking center for the Yotes last year, as he started only 32% of his shifts in the offensive zone. He was able to turn that around to end 41% of them in the o-zone. He’s not the biggest around, but he’s one of the more unpleasant to play against. He’s not going to give you a lot in scoring, but with his draws and checking he can drive possession for either the 3rd or 4th line. And he played on the run-n-gun Caps, so it’s not like he hasn’t kept up with quick teams before. He made $1.3 million last year, and it’s hard to think he’ll get any more than that this time around. Might be an excellent model for both Kruger and Shaw.

If Gordon was on one side of the spectrum, say in the middle of the defensive side, Cullen would be on the other, in the middle of the offensive. Cullen also is an excellent faceoff man but comes with much more offensive upside than Gordon. He also can run a point on the power play, which might be a great way to limit Keith’s minutes at least early in the season by having Cullen and Leddy run both the units. Cullen had 27 points in the half-season this year, and at 36 is more likely to settle for the one year deal the Hawks would offer. As badly as the Wild were outgunned in the first round, Cullen gave the Hawks a fair share of headaches in that series. Might not slot as easily to the bottom six as Gordon would, but also wouldn’t be completely lost on a checking line either. Cullen made $3.5 million last year, and probably will see that come down to around 2, if not less. A little harder to fit, but would only be a for a year.

This is a real longshot, but the Ducks haven’t signed him yet. He may not want to leave his buddy Teemu at all, or maybe he loves it in Southern California. However, he comes with a lot of what the Hawks might be looking for. Wins draws, offensive upside, veteran who hasn’t won the Cup yet, actually has more snarl than you might think. Longshot, and maybe too expensive even on a lessened one year deal if he wants to leave Anaheim at all.

Another longshot, but maybe not quite the longshot of the names we mentioned up top? Weiss is coming off wrist surgery and may need to go somewhere to “prove it” before he lands the rich deal he thinks he deserves. Weiss would obviously be your #2 center and send Pirri back to Rockford. But the problem is he’s a four time 20-goal scorer and even if he can only get one or two years from a team, he’s probably still looking at over $3.5 million on the open market. If he would come down to the 2-2.5 range, it becomes a possibility. But he’ll still want too many years, methinks.

Really only including this to piss off Feather. Stan already passed on this guy once, but he is the perfect fit on a 4th line for someone to just win draws and play on the right side of the ice. The problem with Reasoner is he might already be breaking down, as he missed 17 games this year and 20 last year. That’s not going to get better at this age. However, he’ll probably be the cheapest on here and might have one more run in him.

Some other names you might hear: David Steckel wins a lot of draws and is a big, big body. But he would have trouble keeping up with the Hawks pace. Tyler Bozak is hated by every Leafs fan but his metrics suggest he drives possession, wins draws, and might outdo Kane at the bars. Unlikely, that one. Matthew Lombardi is just a guy.