All Aboard The Rockford Shuttle 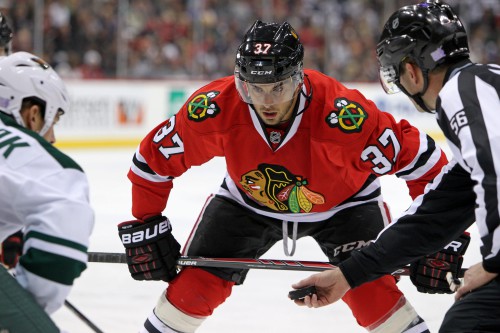 It came a little sooner than I expected it, but I think we all saw it coming once Brandon Pirri was kicked off the second line as soon as Handzus was removed from his iron lung. Today he was sent down, along with Mike Kostka who will be on a conditioning assignment. In their place Joakim Nordstrom was called up, as was Jeremy Morin.

The call-up of Morin is curious, as this was a player we’d all pretty much figured Q had written off and was never going to warm up to. It’s obvious Morin is too good for the AHL but he may not be good enough yet for a serious Cup contender in the Hawks (though I think he will be one day). Nordstrom has already gotten a few cartoon hearts to float of Q’s chest in preseason, and has played very well in Rock Vegas.

How this shakes out on the roster? I’m not sure I can tell you.

Either Morin or Nordy will slot in to where Brookbank had to last night on a line with Shaw and Versteeg (I think?). Though what point there is in having one of those guys sit in the pressbox regularly I’m not sure, but fine. It’s hard to fathom that either of Ben Smith or Brandon Bollig would ever be a healthy scratch at the moment, so there isn’t going to be some sort of rotation.

Of course, all of this means that Michal Handzus will be centering Brandon Saad and Patrick Kane now, and some other combination of top six wingers when the blender gets hit in the future. I know most expect me to fly off the handle, and I don’t like it but we’re barely a quarter of the way through the season and the real emotion needs to be saved for the spring (I’m trying to convince myself as much as you). For those who may be newer fans or not aware of other teams, what angers me and other Hawks fans about Handzus playing that high up the lineup is that he’s never been a #2 center in his career. Oh sure, he’s occupied that spot on some garbage teams when there were no other options. But ask Kings fans how they felt about that experience as well as Hawks fans.

For many regular season games, Saad and Kane and Hossa and Sharp can certainly mask what deficiencies Zus has. They’re that good. And Zus does enough thing well or ok to not be a complete disaster. He just doesn’t do anything great, and he certainly doesn’t move well.

The fear isn’t what happens in games in December or even January. The sights are squarely on defending the Cup. And in this simply insane Western Conference, the margins of error could be so very, very small. I’m not talking about standings or where the Hawks finish. Not even sure it matters because it just looks like you’re getting a nasty 1st round matchup no matter what.

I’m talking about Handzus lining up across from Vladimir Sobotka for six or seven games. Or David Backes. Or even Mikael Granlund, who’s already scorched him this year. Or a healthy Mike Richards or Logan Couture or Joe Pavelski. I could keep going.

Not to take anything away from last year’s run, but the Hawks path to the Bruins wasn’t as rough as we’d like to believe. They really should have crushed the Wings, but didn’t partially because their coach was getting clowned by Mike Babcock. The Kings were down two centers in Mike Richards and Jarrett Stoll for parts of that series. With the Sharks, Blues, possibly Avs, Wild, and one or two others looking improved from last year, it’s going to be one tough mudder to get out of. And I feel like using Handzus this much is gobbling up some of that margin.

Then again, this could shake out any which way. If Marcus Kruger’s faceoff prowess continues, he really should be on the 3rd line with Steeg and Bickell at some point. Shaw could end up anywhere from #2C to #4C to fourth line winger. Who knows? It’s a long season.

As for Pirri, this really could be nothing more than Bowman telling him, “Go back to Rockford, slay the AHL for a week or two, get your confidence back, and then you’ll be back here.” Or we may never see him again. What we saw from Pirri basically was 10 pretty good games, and 10 not so. Neither is large enough of a sample size to make any determination. I just feel like you really get a good feel on a player when you see if he can pull out of his first downswing in the NHL. Pirri won’t get that chance, yet. Is Pirri a better answer to those questions I asked about Zus above? No, probably not, though there is time to for that to change. We know Q’s problem with Pirri is his defense. But even when he wasn’t scoring, I didn’t see a lack of effort from Pirri without the puck. Sure, he would get outmuscled at times and occasionally be out of position, though not as much as when he came up. If it’s not effort, I wish someone would ask Q what exactly it is.

Times like this I’m always reminded of something TheThirdManIn.com’s Chris Block told me in our first year doing this. He said that Quenneville doesn’t like players who don’t do everything. It’s why it took him forever to warm up to Brian Campbell. It’s why Andrew Shaw and Brandon Saad got every chance in their first years, or at least did after Dan Carcillo got hurt. It’s why players like Pirri and Morin have to scrap for time, because one half of their game needs work. The one outlier is obviously Nick Leddy, who wasn’t ready to do everything at first but was asked to anyway. Q doesn’t have much patience to build a player’s game, and would prefer to only refine. On a league power, that’s understandable in some ways.

And if you don’t do everything, you’d better at least have the defense down. Hjalmarsson got tossed in the deep end quickly because he could do that. Same with Marcus Kruger. And it’s why Q is opting for Handzus over Pirri now.

Jesus, that got long. Sorry.