Admitting You Have A Problem Is The First Step: Blues 3 – Hawks 3 (Blues Win Beer Pong) 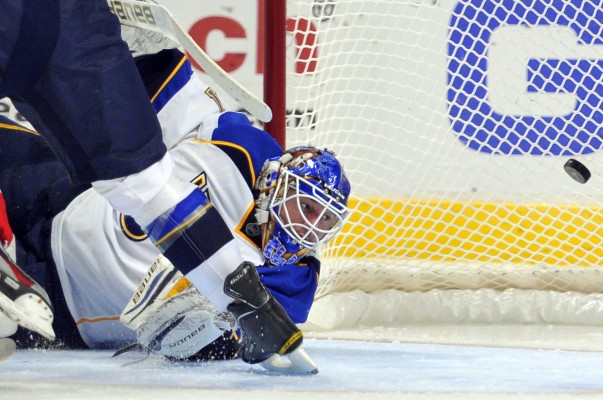 The Hawks make it easy these days. Whatever happens, it all seems to be on a recurring theme. So at least I don’t have to come up with something, which we know I suck at. And they are to wit:

-Once again, a 3rd period lead goes poof. Thankfully, the Blues were happy to give it back. This time, it wasn’t a systematic failure , but an individual mistake leading to Cracknell’s equalizer (was it Bolland or Rozsival who whiffed on the shot at the point? Live I thought it was Bolland, and the replays don’t pick up that early.) But the thing is, in the 3rd period, it’s always SOMETHING. Be it an individual mistake, a bad goal, a bad bounce, systematic breakdown….whatever. Enough of it has happened that it certainly can’t be filed under “Shit happens.”

-Corey Crawford….well, he wasn’t good. I haven’t investigated the Tweets that thoroughly, thanks to getting no reception in the UC. But judging from what I have seen, there appears to be something of a goalie controversy. I don’t think we’re there yet, but there were familiar hiccups from Crow.

Cracknell’s first goal was yet another case of Crow’s angles being off. Yes, his shot deflected off Seabrook’s stick. Yes, Seabrook’s gap could have been better and this all would have been avoided had Keith not fallen down. But once again, when someone comes down Crow’s left wing, he leaves far too much of the shortside open. We saw that even two years ago. Is no one on staff seeing that?

Crow was obviously deked out of his gord on the breakaway and at times in the shootout, but I’m not going to get all weepy over that. But that was a bad rebound for Backes’s goal no matter how many screens there were.

I guess Q has two options. He can see that we all sink or swim with Crow, and let him play himself out of this, giving Ray Emery only looks in back-t0-backs that are left. Or he can throw open the door, split the starts, and whoever takes it takes it. But that seems far too risky and more destined for failure.

-Dave Bolland sucks. It pains me to write that, because I’ve been on his bandwagon since the first moment he showed up in 2007. But let’s face it, when did you last notice him in a game when it mattered (his two goals against Scum don’t really count)? If he’s hurt and can’t get around, he should be rested until healthy. If he simply doesn’t care because it’s not the playoffs, what makes him so sure he can just turn it on when he wants?

Look at the CORSIs. No one playing with Patrick Kane against a team that was as surprisingly as passive as the Blues were at times should be hovering around even or worse. He can’t win the puck for his linemates, he can’t get it back, and he’s not distributing it when he does. He’s not getting to scoring areas, he’s not creating anything, he’s not even good defensively. Why are we still watching Q pretend that this is working thanks to Kane’s simply super-human efforts?

Someone had better get in Bolland’s ear, and explain to him he’ll be plying his trade in Edmonton or Winnipeg if he continues to be dung. Because Kruger or Danault or aiming for his job. Does he think he’s untouchable?

-With all that said, it was hardly an unacceptable effort from the Hawks. They carried the play, dominated possession, and could have easily walked away easy winners. A couple moments here and there prevented them. Is that still malaise or something deeper? Can’t tell you. I’ll find out with the rest of you.

-I know what the hit chart says, but the eye test didn’t feel like the Blues were as intent on getting in on the forecheck as they have in the past. A lot of 1-2-2 from them. Can’t say I know what that means.

-Barret Jackman is such a joke. He didn’t know whether to get Toews or Saad for Saad’s goal, and like he always does he did neither. I don’t know what he was yapping about after Stalberg’s hit, because it didn’t look viscous so much as mistimed. And Roman Polak….well, as Slaky said: “Circus Bear.”

-Handzus was fine. He shouldn’t be playing wing, Kruger should be up at center with the second line, but this is another complaint for another time.

-In case anyone thought CSN had any visions of being an actual journalistic entity, may I present Susannah Collins’s leather jacket and low-cut top look. Thanks for playing.

-I was wondering if David Backes was even playing…right up until he scored. And then I wondered if he played after that.

Moving on. There are cracks for sure. Are they crippling faults in the foundation? Don’t think we can say that yet. But they should be watched.