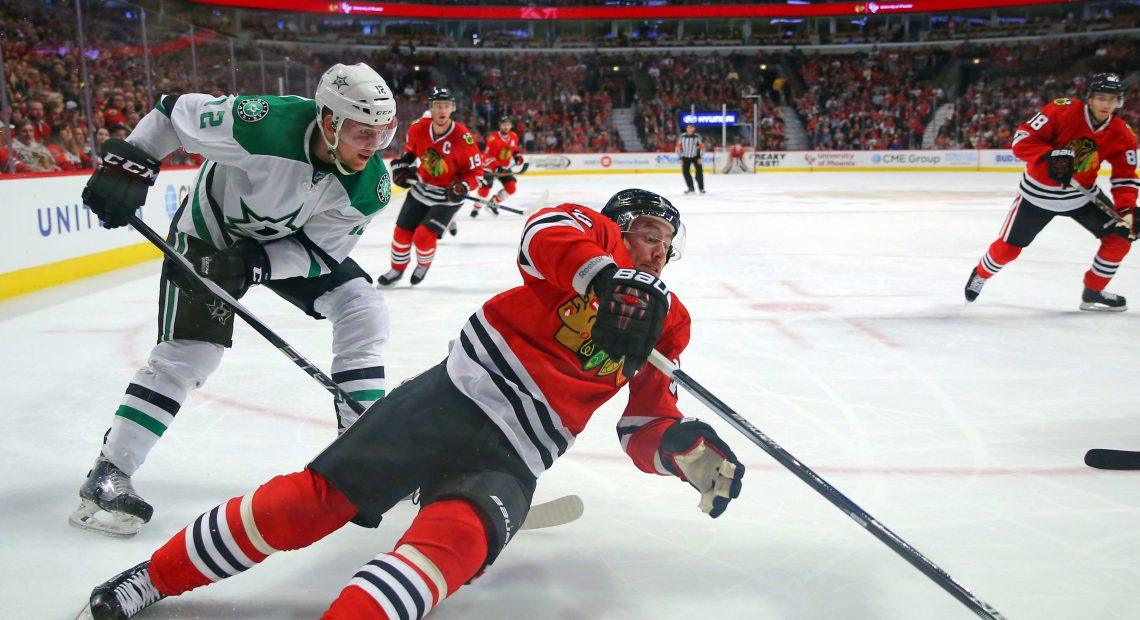 In previous meetings against Dallas, you could make the argument that the Hawks weren’t showing the Stars everything they had. Joel Quenneville wasn’t line matching or changing quickly on the fly looking for a mismatch. The Stars still smacked the Hawks 3 out of 4 times but there was always a lingering thought that maybe there was a little bit saved up the Hawks sleeve.

Tonight, at least while the game was still in doubt..so very briefly, Joel Quenneville was looking to line match as noticed by his early rotation of lines. Then the Stars exploded for four goals as their wont to do against the Hawks and all of it was meaningless. That’s the thing about playing good teams though, line matching doesn’t mean anything if your team isn’t deep enough.

In this case, the Hawks are severely outgunned on defense. In tonight’s Committed Indian program, I went through the Hawks’ defensive units from the past 7 seven years. Even in the years where the Hawks were one and done in the playoffs, their defensive units went five men deep. This year, you can barely make the argument that they’re three deep.

We’ve had fun during this run looking at potential playoff matchups and finding the weak links in the opposition’s defensive pairings. We could point to a Clayton Stoner and say, this is who the Hawks will exploit. On the flip side, the Hawks were insulated defensively enough that their third pairing was generally their only real weak link and even then, they were still ok for the most part.

Now, the Hawks are on the brunt end of that. What team won’t absolutely be licking their chops to tee off on TVR, Gustafsson and Rozsival in a playoff series. Meanwhile, Seabrook is going to need a full off-season to regain any semblance of hockey shape.

TVR is bad, actually. I hate to pile on to the hate train but it truly is unbelievable how a coaching staff that values active sticks and stick positioning on defense allows him to take a regular shift. You could literally give yourself a stroke watching him trying to defend passes from behind the net.

Please, I beg you. Watch his stick positioning while he defends. He will have it positioned on the opposite side of wherever the wide open player is and then the puck is hurdling at the Hawks goalie at 1,000 mph. It happened again tonight on Dallas’ third goal. The puck goes down low, TVR puts his stick toward Scott Darling while Patrick Eaves is standing off to TVR’s forehand. Eaves gets the pass from the corner and had enough time to read the Sycamore Police Department report and then blast a shot past Scott Darling.

This happens at least three times a game. It happened all game against Minnesota and when Dallas gave a damn tonight, it was happening again.

All that said, he can survive as a 6th/7th NHL defensemen. But on this team and with this defensive depth, he gets absolutely eaten alive. So get used to it.

Gustafsson is just a touch better at this point and that’s only because his skating and stickhandling can get him out of certain situations. But tonight, he got with his pants down on the Stars second goal when he was defending the side of the net and was too busy watching Andrew Shaw’s hit to notice the puck was being passed between his legs. That’s without even getting into the fact that he’s outside the Quenneville Circle of Trust so he likely won’t matter when it does matter anyway.

Rozsival is Rozsival and he also has a track record of being able to adjust his play for the playoffs. So as a third pairing guy, he is less of a question mark.

Look, we’ve all seen this movie. In a 7 game series, the Hawks won’t go away quietly because their core is going to carry them. It’s happened enough times that we can expect it. So this isn’t some concession speech where I declare the Hawks are dead. But this is not about winning one round or even two. It’s about the Hawks winning four rounds and in order for this team to do that as constructed, it’s going to take one or two of their core guys going nuclear again. They may have it in them. They may not.

But hey, this also happened so it wasn’t all bad. High-five to the Blackhawks social media person that straight-up trolled all of us and got Ed Olczyk to say the name Montana Brennan on the broadcast. Truly a magical moment for all of us: