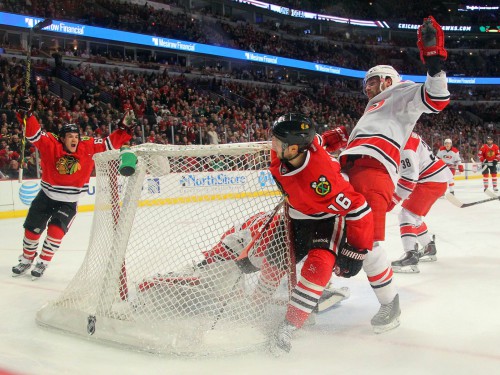 It is my hope that tonight represents the beginning of The Red Dawn. We won’t know that for a few game of course, but this is how you wanted the Hawks to respond on their New Toys Night (originally said by friend of the program Kevin, who used to be frontman of The Mannequin Men). The front office has said it’s time to get serious, and at least for one

-I know people want to shit on the Canes and that an easy victory over them doesn’t mean anything. But this is a team that went 7-4-1 in February (a fuckload better than the Hawks managed) and had absolutely fisted the Caps and Isles in their last two games. So making them look stupid shouldn’t be dismissed quite so quickly.

-So, the new guys. Two of the three worst possession players on the night. TOTAL FAILURE. Nah, nah. It didn’t seem like watching that. Vermette along with Sharp and Saad put some nice moments together, and I barely remember them being pinned in at times.

-As for Timonen, he looked like a guy who just wanted to do everything simply, which you understand. He didn’t look swift, but he did look efficient. Basically, no one can have a judgement on either until they’re back from San Jose at least.

-Joakim Nordstrom has looked a completely different player in this latest call up. I don’t want to think they thought Ben Smith was expendable based on three games Nordy played before this one, but maybe this is what they envisioned?

-Speaking of bottom sixers, the third line tonight was an interesting watch. At least for one night, Brad Richards looked to have taken the acquisition of Vermette personally. Long may that continue. Theirs was the only line to not scratch tonight, but I don’t know how they could have been more active. That line was a combined +20 in Corsi. While the Hawks will need to get a look at Desjardins, who wants that ahead of Teuvo right now?

-With all the furor over Kane’s injury, it was easy to forget that the Hawks have another generational talent capable of strapping them to his back and simply willing them to better. You’d think we’d remember that because he has a “C” on his jersey. Look out, kids. Something you did.

-If Crawford’s injury had been serious, you could cancel the season.

-That one pass from Rozie to Toews for the first goal will keep Rozie in the lineup for far too long.

There’s not much more else to say. The Hawks seemed to have a renewed bounce in their step. Which they should after their front office gave them everything they could to be a thing in the spring. It’s a good start, but there’s a few more things to see before we officially dub this “The Red Dawn.”