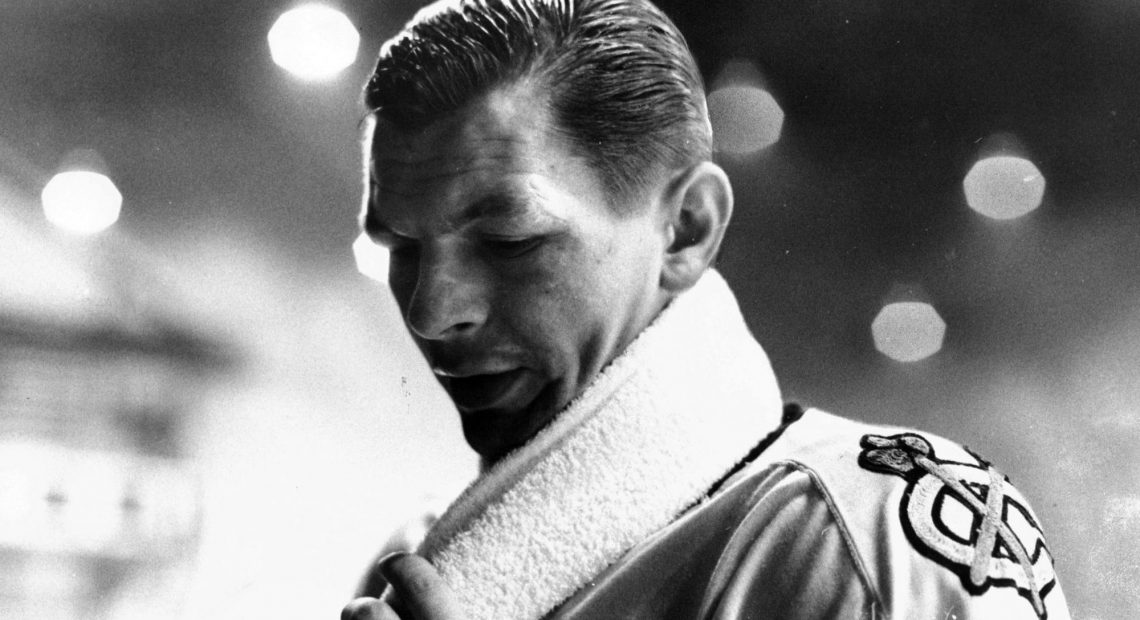 It is a sad day for all Hawks fans. Stan Mikita passed away, the greatest Hawk of them all. While I could sit here and list off the numbers and accomplishments, or talk about the class and dignity I only experienced through the tellings of other people, I thought it might work better if we let someone who saw him play do the honors here. To illustrate what he meant to several generations of Hawks fans (yes Fork, I’m calling you old). So I’m going to let our friend Fork, from Hawks blog past Hockeenight.com, take over from here. (@Hockeenight).

When I was born, Stan Mikita was a Blackhawk.

When I started Kindergarten, Stan Mikita was a Blackhawk.

When I got my first girlfriend, graduated grammar school, started shaving, got my first driver’s license, Stan Mikita was a Blackhawk.

When my high school class graduated, Stan Mikita was a Blackhawk. To be honest, he had just played his last game, but you get the idea.

It got to the point that I always figured I’d be on my deathbed, ready to head off into the great beyond, and Stan Mikita would swing around a defenseman, bury a puck behind me, and I’d slip away to the sound of the foghorn.

The Hawks of the 60s and early 70s were pretty much defined by two of the all-time greats, Bobby Hull and Stan Mikita. They were never linemates, Hull always on the top line and Mikita on the 2-line, with Kenny Wharram on the right, and Ab McDonald or Doug Mohns on the left. The “Scooter Line.”

Anyway, Hull and Mikita. Hull was right out of Central Casting, a handsome mass of muscle with curly blonde hair. Even his nickname, “The Golden Jet” sounded like it came from Hollywood. Hull was the fastest skater anyone had ever seen, with a huge slap shot. He was the perfect idol (on the ice, at least), a hockey God. Even the name “Bobby Hull” sounded like it came from a movie.

Mikita though, he was one of us. He never had any catchy nickname…we just called him “Stosh,” like anyone else named Stan from school or around the neighborhood. He was born in Czechoslovakia, and moved to Canada as a small child. The fact that he was from over there resonated with every Bohunk in Cicero/Berwyn, who claimed him as their own. We all identified so strongly with Mikita that even now there is a sea of #21 sweaters at every Hawks game. The name, like the man, was solid, dependable. Where the Canadiens had players with named that sounded like music, names like Guy Lafleur or Jean Beliveau, Stan Mikita sounded more like the guy who put a new roof on your aunt’s bungalow, or fixed your grandfather’s Rambler. Stan Mikita had a name like half the city of Chicago, and after every game he was at his locker, pulling on a dart just like everyone in the Stadium had during the game, giving the old barn that thick layer of smoke that probably made my young lungs look like those of a veteran coal miner’s. One of us.

And to that end, maybe it was fitting that he never left the Chicago area. He wound up having a few different businesses, but he never seemed to be a “Captain of Industry” type. He always made time for kids looking for autographs, as well as adults who could somehow seem starstruck around him, despite his completely unimposing air. He wasn’t a SUPERSTAR, even though he was. I mean, to this day nobody else has pulled off winning the Hart, Art Ross and Lady Byng in the same year, and he did it twice. But he never seemed to seek out star treatment or be aloof with anybody. He was one of us.

Stosh was one of the great innovators in the game too. One day one of his sticks got caught in a door jamb. By the time he finally was able to pull it out, the blade had a huge curve in it. He went out to practice with the curved blade, and the puck rose and dipped when he shot it. Hull and Mikita both used the “banana blades,” and now hockey sticks with curved blades are the norm. A far cry from when Maurice Richard scored so many goals with his backhand, which would not have been nearly as lethal with a curved blade. A guy who took a handyman’s approach – he found something unorthodox to do the job better than the standard tool, much like every handyman around Chicago. One of us.

My first hockey sweater was one my dad bought for me at Morrie Mages. The first one I pulled out was a #9, and my dad told me he didn’t want me wearing anything from “that fuckin wife beater.” So I wore #21. Then when I saw the back of his hockey card and saw he was from Czechoslovakia – the same place my great-grandparents came from – that cemented it for me. I’d go out with my Mikita sweater, my Chicago-brand skates, and a Mikita-brand helmet and my banana blade. There was one frozen patch where kids would go and skate, and I was always welcome because somewhere in my travels I’d acquired a net. But the #21 on my back and that helmet were where any similarities between me and Stosh ended. Except, of course, for the fact that we were both Bohunks in Chicago never quite overcoming challenges – for me, it was my family never having much dough, and for Stosh, it was the Canadiens. I’m pretty sure my dad’s dying words were “Fuckin’ Cournoyer.”

Dollar Bill managed to alienate every great old Blackhawks player, and as a result, neither Mikita nor Hull were in the United Center for years while the Hawks flailed away doing something that kinda/sorta resembled hockey if you squinted enough. When Dollar Bill finally shrugged off his mortal coil, Rocky Wirtz and John McDonough were able to mend fences, and Hull and Mikita returned to the Blackhawks as ambassadors. Of course, the cynic in me could point out that Rocky saw the monetary value in having those guys around, but that’s for another day.

Blackhawks fans my age (and older) were just happy to see them in the UC, and occasionally we’d get the extra trip down memory lane as Mikita would come out on the ice, or be up on the Jumbotron.

Once we heard about Stosh’s battle with dementia, we all knew this day would come. Just as we saw it coming with Walter Payton. Just as we knew Ernie Banks wouldn’t last forever. They all came here and stayed here. They’re as much a part of Chicago’s fabric as dibs and patronage.

So the next time you take a beverage to your lips, hoist it for Stosh. He will always be one of us.