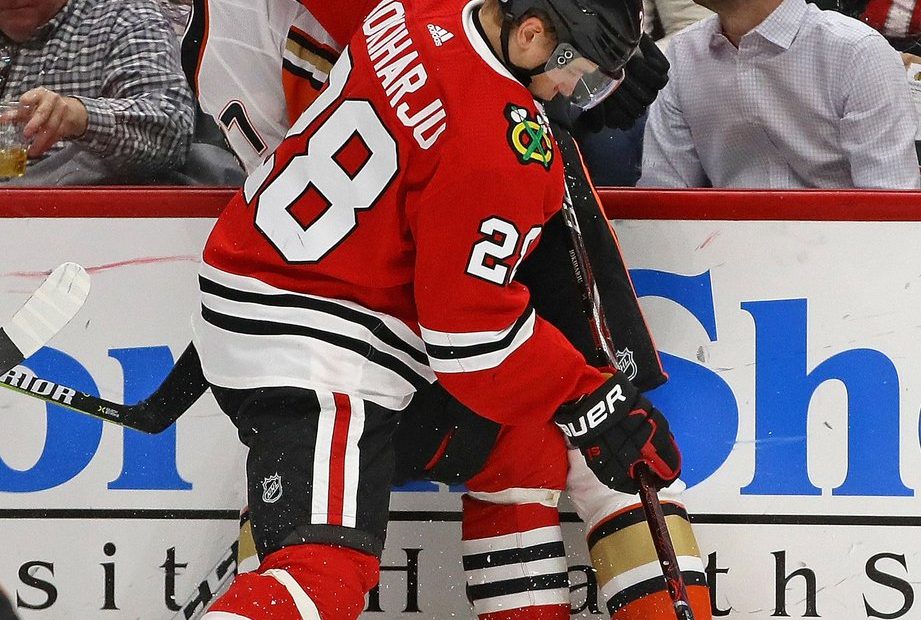 There is something so satisfying about this kind of Blackhawks win. Were they perfect? No. But they were the better team on the ice from start to finish. The players you want to see step up and play well did just that. Corey Crawford did his thing. Sure, it was the Ducks. That doens’t make this kind of win any less fun. Let’s get to the bullets:

– The Hawks played well in the first period, but there was enough within the period that made me say “yuck” that I almost choked laughing when Chris Boden and Jamal Mayers posited that it was the best period of the season for the Hawks. The breakouts that were such a major issue for the Hawks against the Lightning on Sunday were an issue yet again, and if the Hawks have any real strategy on getting through the neutral zone it was hardly on display tonight, let alone in the first period. If they can’t have one guy – usually Kane or Toews, it seems – carry the puck all the way through the zone, they’re completely lost, and it seems no one is capable of making a good pass in that zone, including 19 and 88. The Ducks love to sit back and let the other team charge at them, which is incredibly stupid, but tonight it worked, because the Hawks were still having trouble getting into their own zone.

– This was another strong game for Saad, who finally cut off the snake’s head and got himself on the scoresheet with his first goal this season. He was dominant throughout the night as well, skating with a fire under his ass and playing  a piss and vinegar kinda game. He was all over the ice in the final minutes as well, as the Hawks attempted to close it out. He consistently got pressure on puck carriers and was able to get the empty netter for goal number two of the night and season. The optimism around Saad remains high nearly across the board for the FFUD crew, so I don’t think anyone was near the panic button on him at all, but him finally scoring feels like a bit of a weight off (more for him than us, I’m sure) and hopefully he continues to play this way. If he does, the production is going to come to him.

– Another point on Saad – can people please stop bringing up the fuckin’ Panarin trade every time he does something good. You don’t have to validate the trade, and bringing it up only lends credence to the idea that it was a bad trade, which it wasn’t. You don’t have to convince people Saad is good – he is. Is he the offensive dynamo that Panarin is? No. But Panarin was a toy – he’s the kind of player that is a scoring luxury for a good team. He would probably be a detriment to this current edition of the Blackhawks. And Brandon Saad fucks. Thanks.

– Jokiharju is pretty much the real deal. For him to be doing what he is doing at the NHL level right now, at 19 years old, is almost unheard of from defensemen that aren’t heralded as generational talents prior to being drafted. Now, that doesn’t mean Joker is a generational talent, because he isn’t. But being strong on both ends of the ice, closing gaps and sealing opponents off from the puck, and being able to make plays with the puck on his stick like he can, all at 19 years old against grown ass men who are stronger and more experienced than you are all things that bode well for his NHL present and future. He might end up proving to be better than we all expected.

– I am admittedly not the best at noticing player trends thoughout a game if they’re subtle, so maybe I am wrong here, but I thought Erik Gustafsson had a pretty good game tonight. He definitely made a hell of play on the GWG, with a great shot fake that left John Gibson’s jockstrop in the crease before he fed Kane for an easy one-timer. He didn’t have a particularly outstanding game, but he was solid and didn’t do anything that was overtly bad. That probably counts as good for him.

– Thank God for Corey Crawford, and his brain that is (hopefully) not a blended mess, after all. He is still the same old top-five NHL goalie he was before he got hurt last year. That is good and I am happy.

– It’s just not the same to watch a Ducks game and not see the mutated pile of infant diapers that is Corey Perry on the ice. However, I enjoyed it greatly. May it continue forever.