ZZ Top Was Only Half Right 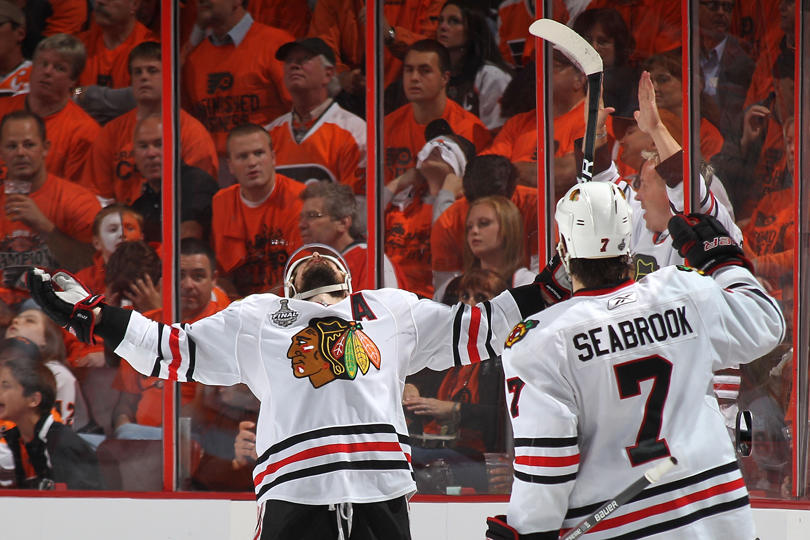 Tonight will be Patrick Sharp’s first regular season game in the United Center as a visitor in a decade.

It’s a phenomenon that most women are unaware of, and for good reason. It’s not something that most guys are willing to admit, even to themselves, but it does exist, and every man reading this article will know exactly what this phrase means: the man-crush. Loosely defined, it is a completely heterosexual and unrequited appreciation for the words and actions of another man. And I have a man-crush on Patrick Sharp.

This is not something that has coincided with the recent renaissance on Madison St. As far-fetched as it sounds, this is something that has been over four years in the making, starting in the dilapidated halls of the Rosemont Horizon (that’s what it will always be to me, regardless of corporate naming rights, but I digress).

During the lockout year of the 2004-2005 season, I found myself attending Wolves games with a very great frequency, particularly due to how close I lived to the arena, as well as an insatiable need for professional hockey. Throughout the course of the season, I grew familiar with not only the Wolves’ players skills and tendencies, but also their opponents’. And in the 2005 Calder Cup Finals, the Wolves met the Philadelphia Phantoms.

The Phantoms boasted a stacked lineup of some names that are now highly recognizable in NHL circles: Jeff Carter, Mike Richards, Joni Pitkanen, Antero Niitymaki, Gary Roberts’ Personal Punching Bag- Ben Eager, and one Patrick Sharp. With such luminaries, it’s no wonder that the Phantoms made short work of the Wolves to hoist the Calder, sweeping the Wolves four games to none. And in the course of that series, I found myself watching the play of a center named Patrick Sharp, who always seemed to be in the right position, skated hard, and was willing to shoot from anywhere. I said to myself and others “That guy’s going to be a solid NHL player”.

When the NHL resumed operations the following year, and Uncle Dale was able to trade for Patrick Sharp for the bag of pucks known as Matt Ellison, I knew immediately that it was a steal of a trade. While it was seemingly innocuous at the time, at present, it goes down as one of Tallon’s shrewdest moves. Though I immediately declared the trade a win for the Hawks, that certainly was not validated by Sharp’s failure to dent the twine wearing the Indian Head for nearly 20 games after joining the squad.

In spite of this initial goal drought, since becoming a member of the Hawks, it didn’t take long for him to become my favorite player on the team, exhibiting the same on-ice traits I had seen in the AHL. And with every achievement, my man-crush intensified. Absolutely undressing Nicklas Lidstrom at the end of the 2006-2007 campaign. The shorthanded goals. The hat trick against Detroit. Leading the team back onto the ice to salute the United Center crowd for the first time against Edmonton. The overtime game winner against LA. I could go on for hours.

When I was bought back into Blackhawks fandom last year, there was only one sweater I wanted to sport. A number 10, with the alternate “A”. And I wear it proudly.

So with the Hawks threatening for a playoff spot at the end of last year, I went with a large group to the game honoring Tony-O, which naturally was a shutout thanks to an unbelievable save by Khabibulin on Niklas Backstrom (the center, not the goalie), and Patrick Sharp scored his 35th of the season on an evening honoring #35. After the game, we stopped into Ketel One for a postgame pop or seven, and after they finally got sick of our shit and closed up shop, we hit the streets and started walking eastbound on Madison.

A black SUV rolled up.

The window rolled down, and before you could say “drive by”, the driver of the vehicle yelled to us “Hey, nice jersey!”. Confusion ensued, as several of us were in Hawks sweaters for the game.

“Who, me?!”, said Adam in his vintage Griswold double-zero.

“No, the Sharp jersey” the driver rebutted.

I re-examined the driver, looking harder than I initially had from my 20+ feet away vantage point. The face then became familiar.

The driver of the SUV? Patrick Sharp.

You could practically see little cartoon hearts bubbling over my head, the same way they did over Beavis and Butt-Head’s for gang leader Todd, bringing the man-crush levels to new and dizzying heights.

Time will tell if these emotions will wane, but given his and the team’s recent performances (Detroit games notwithstanding), they are unlikely to diminish in the foreseeable future.

So there you have it, hockey fans. If there’s anyone that’s deserving of a man-crush, it’s Sharpie. A scorer and a penalty killer, a gentleman and a scholar.

That, and he’s fucking gorgeous. Wait, did I type that?