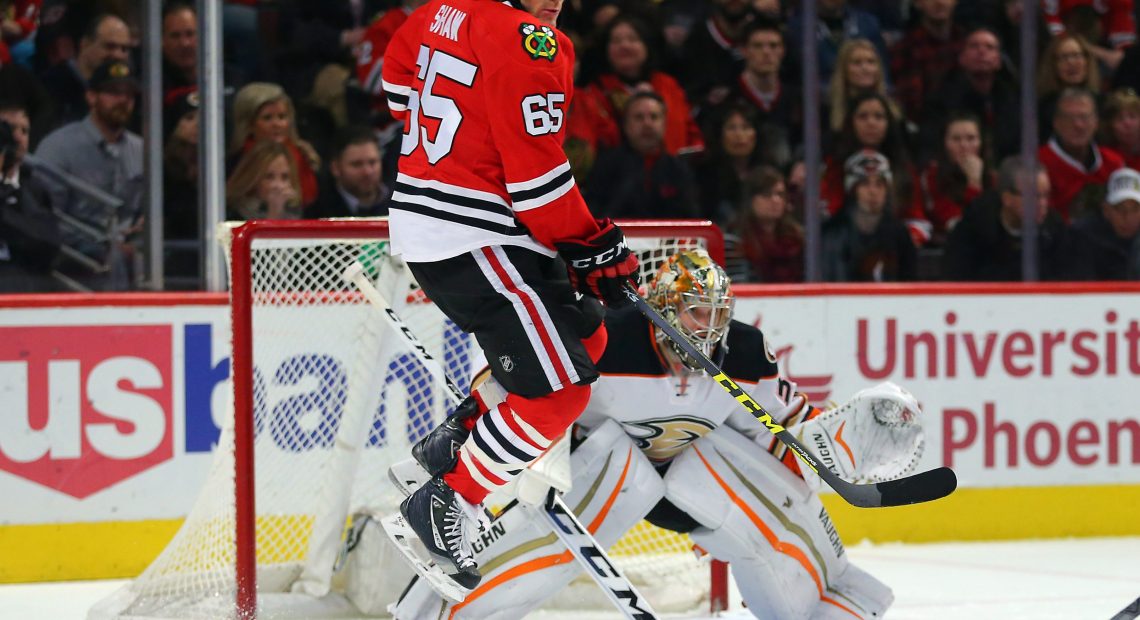 –The too many men penalty the Hawks took in overtime was abhorrent. First off, Bartolo Seabrook needs to put a little more giddy up in his step when he’s coming off the ice in that situation. Duncan Keith should also have had the presence of mind to notice that Seabrook wasn’t going to get off the ice before Patrick Kane touched that puck and skate the puck instead of making the pass. And Patrick Kane should have just let the puck go by him and taken the icing. So it was a mistake by all three players on the ice.

There’s a fine line between being aggressive and stupid. The Hawks were the latter in this scenario and it ended up costing them the extra point. In a 3-on-3 scenario, the Hawks are a much stronger team than Anaheim and there was a strong possibility they would have punched through first.

Instead, they gave Anaheim a power play and that was that.

–By the fancy stats measure, it looked like Anaheim was playing against an ECHL All-Star team. The Hawks were completely buried in possession with only Niklas Hjalmarsson and Marian Hossa in the black. Brent Seabrook finished with a -16 (!) Corsi against.

Buuuuut, with the old fashioned eye test…it didn’t appear to be that bad. At least to this nonpartisan viewer. The Ducks strategy was to simply throw the puck towards Corey Crawford every opportunity they had and keep hitting the square button until the puck was frozen or in the net.

On the other hand, the Hawks weren’t particularly great when they had the puck in the offensive zone to sustain any significant pressure. Some of this was due to the constant line jumbling, some due to Anaheim winning more loose puck battles and some due to the Hawks just not being that crisp.

The good news was they still managed to squeeze out a point as they battle through the malaise of February.

–Watching the game this morning and knowing Marian Hossa got hurt but not knowing when was like waiting for Crispin Glover to lose his arm in Hot Tub Time Machine. I watched every Hossa shift with my eyes half covered, desperately terrified as to when the scary part was coming.

His injury appeared to be quite gruesome and immediate speculation was the Hawks could use his cap space like they did with Patrick Kane last year. Joel Quenneville seemed to throw cold water on that very quickly after the game as he said the injury does not appear to be serious.

So they didn’t have to amputate.

–As we stated in Thursday’s recap, Erik Gustafsson played one of his worst games of the season against Dallas. Whether it was because of sickness or hitting the rookie wall remains to be seen. However, he was replaced by Viktor Svedberg so clearly it was also obvious to someone in charge at 1901 W. Madison.

The Ducks are not a great matchup for Svedberg as he provides a giant slow target for the aggressive Anaheim forwards to tee up on. Much like they did last year when they ended Kimmo Timonen’s career (sky point). And that’s exactly what happened.

Svedberg was not nearly as strong in his return as he was in Colorado in the first game out of the All Star break.

–You can tell how serious the Hawks take games when Joel Quenneville starts to get very line matchy and does not give many guys an opportunity to play in situations he doesn’t feel comfortable. To give you an indication of how he felt last night, more than once Michal Rozsival and Viktor Svedberg started a shift with Ryan Kesler’s line on the ice. In April, this will not happen.

–With the number 4, his jersey half tucked and his upright skating style, I can’t help but see Patrick Poulin every time Dick Panik is on the ice. All we need is him to start wearing an awful Jofa helmet and the transformation is complete.

–The Hawks and Stars now sit tied for first after the Stars outlasted the Capitals yesterday with Dallas still holding two games at hand. It would behoove the Hawks to continue taking points any way they can. Toronto is in town on Monday. Anything less than two points would be a waste of time.