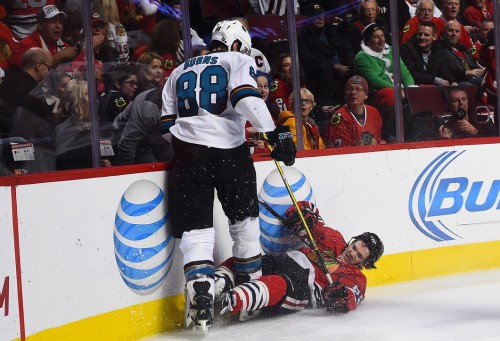 They’re certainly racking up the goalie wins. After a very even first period that ended a deserved 2-2, and a quite simply dull 2nd period that ever so slowly turned to the Sharks, capped off by Pavelski’s goal where their top line got to run around the merry-go-round that is the Hawks’ 3rd pairing, Corey Crawford held his team in the 3rd period where they were outshot 11-5, out-attempted 21-10, and basically simply outplayed. But thanks to Crow, they had time for Shaw to make Paul Martin look like a clown for the second time in the game, forcing both teams into the bull-riding show where one bad change let Kane and Toews in. That basically only ever has one ending.

The performances this weekend, and for most of the season, haven’t matched the results. But in the Suicide Squad Central Division the Hawks won’t care because they’ll need all the points they can get. There will be time enough to improve the roster and hence the performances, and to have it on a higher platform would be beneficial.

-It was a strange game for both goalies, as they waffled between brilliant at points and looking a little helpless at others. Crow was made to look silly against Donskoi after Keith got caught slightly flat-footed. There wasn’t much he could do about Wingels’s or Pavelski’s. Jones made a ton of saves where it looked like he never saw the shot, and also a fair share of athletic ones. He’d want the Kane one back for sure.

However he got there. Crow is simply playing the best hockey of his career. The only other time I can remember is 2013, but that was behind a much better team and defense. He’s being asked to do much more now and he’s doing it. Crow’s current .927 SV% has him sixth in the whole league. And the Hawks have needed just about every bit of it. I have no idea if he can maintain it over a whole season, and the Hawks shouldn’t bother finding out.

-When Danault was called up I wrote in the program that it would take a while before Q trusted him to take on just some of the responsibility that Kruger had. A while is apparently five periods. Danault saw most of his time against Thomas Hertl’s line, but as the game went on he was thrown out against Patrick Marleau. He went 8-1 in attempts against him.

Danault, it feels like anyway, is going to be the fun watch that we thought and hoped Dano would be (and still might be). He’s a first round pick, so he can be more than just a grunt and his junior record shows some offensive dash. Though picking up a Costco-cart of points in the QMJHL is akin to filling out your name correctly on the SAT. What attracted scouts and the Hawks to Danault was his puck pursuit and his defensive awareness. He’s already on the kill, though very limited. He only played 11 minutes, but I fully expect that to go up. And he collected his first NHL point, winning a board battle to Shaw to beat Martin to the net.

I have an inkling that Danault will get every chance to stick. But that doesn’t mean he won’t be treading a fine line with the coaches.

-Danault might start taking on the harder assignments because it doesn’t appear Artem Anisimov is up to it. This is the sixth game out of the last seven where his line has been buried possession wise. This time it was Marleau’s line that ran all over them. Kane’s goal came while moonlighting with Rasmussen and Bickell.

I don’t want to be hard on Artem. He only played 50 games last year, and he’s averaging a minute and a half more per game than he ever has, including a full two more minutes even-strength. Yes, he got a goal tonight when Paul Martin’s body went into chrio-freeze behind his net and he basically left a hanging curve in front of his own net. But Anisimov needs to start turning the tide at evens.

-At some point, we’re just going to stop writing whatever went wrong with Scuderi and Rozsival. We’ll just put up a Statler and Waldorf joke. It’s going to happen at least once a game anyway.

That’s three in a row heading into what has to be the Hawks’ most intriguing game of the season. While the Hawks certainly wouldn’t consider any regular season game any sort of litmus test, we can be sure the Stars will. And every so often the Hawks still like to bring out the hammer to show who’s a pretender and who isn’t. Then again, they might not have a hammer this year. We’ll find out on Tuesday.