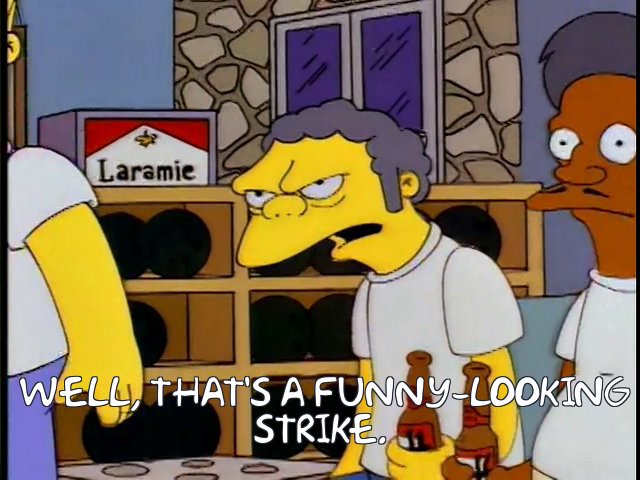 Should have taken the left at Albuquerque.

I’m not sure we learned anything we didn’t already suspect is going to be some of the issues early this season. First off, you can’t take five straight penalties when Tarasenko and friends are loitering around the other side. And you can’t have TVR anywhere near there either. So there are two problems.

But we knew the Hawks are a bit mismatched at forward, and there’s going to have to be a level of patience while they see if some of the kids can figure it out. Hinostroza and Motte looked quick, but it was in every direction. Schmaltz looked hesitant as the enormity of the task of being an NHL center sunk in. Forsling showed some really promising flashes, and some flashes the other way. That’s just how it’s going to be. So for now and once again, the Hawks are a one-line team.

So you get Anisimov’s line against the top pairing of the other team a lot, and they actually did pretty well in terms of attempts. But they didn’t score, and no other line got the better of whatever they were seeing. Toews was met with Stastny’s line all night and it was basically a standstill. The Hawks did get a goal from Kruger’s line even though they didn’t start one shift in the offensive zone, and that’s a good thing. But it doesn’t mean much when you don’t get anything at even-strength from anyone else.

But hey, one game. Let’s to it, friends.

-Let’s get this out of the way because it’s just goddamn hilarious. Jordin “But Duncs and Seabs Really Like Me!” Tootoo played all of four minutes, was a -9 in Corsi and wasn’t on the ice for any attempt for. We’re all resigned to this fate (COOOOAAACCHHHH), and we know it won’t last long. But it never gets anything other than frustrating when Q is telling everyone this player sucks by playing him four minutes. So why even bother?

-Forsling and Kempny both showed a willingness to use their feet to get out of trouble, which is a good thing. Everyone is just going to have to live with when that gets them in trouble for now. Forsling always wants to make a pass, which again is a good thing, but he’s going to have to learn when it’s time to consult the teachings of Sebastien Bach and just “get the fuck out.” How much longer can I keep making Skid Row references before none of you have any idea what the fuck I’m talking about, anyway? And if everyone still does know, that’s not really growing the brand, is it? But that’s not why you called.

-Not even Q could ignore just how terrible TVR was tonight, and he got the low ice-time amongst all the d-men. But so much for keeping Keith under 25 minutes.

-Speaking of which, the Hawks aren’t going to win many games when Keith is underwater in possession. But he won’t be paired with a wheel of cheese very often either. Or so we hope.

-Look Eddie, I know Campbell was kind of slow to come out on Shattenkirk for the Blues first goal. But it is suspicious that that’s where you immediately jump. Secondly, that stop wasn’t getting stopped if Crow and Darling were both in net at the same time. Third, it might have helped if Hossa didn’t just wander off and made ShattenKevin go closer to the goal line and make for a tougher angle. That is where you want power play shots coming from.

-I was not encouraged that less than five minutes in Seabrook got totally walked by Colton Burpo, but that was one of the last moments where it looked like Bottomless Pete had survived through the summer.

Let’s also send a warning that the Hawks’ next two games are against the other really solid team in the division, and it’s not out of the question that a team still finding its footing could be 0-3 on Sunday. Let’s promise to not lose our heads kids, ok?