What A Way To Run A Railroad 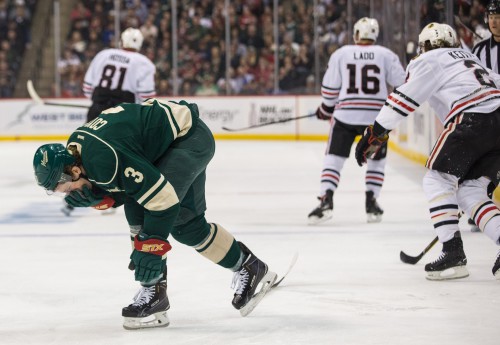 Another banner day in great Hawkdom and hockey in general. It’s gone beyond comedic to the surreal at this point. A listless, 5th straight loss to the decidedly in-the-middle Wild, the Hawks most important player looking at some sort of suspension, an organization continuing to act in a most callous, cowardly fashion, and a league that if it were any more balloon-handed would be able to carry the dude’s house from UP to Jupiter and back. Let’s see if we can’t get through it all without opening wounds on our collective faces.

-Let’s start with Duncan Keith. While his elbow on Shooty Twin from 2012 and his high-stick can’t actually be considered in whatever discipline is coming his way, past displays of behavior can, which essentially is the same fucking thing. I suppose the technicalities would come up in any sort of appeal, which I’m fairly sure is going to come up.

You can already see that Keith’s defense is going to be claiming it was accidental as he was looking to get get back up and away from Coyle. If you’ve followed Keith for any length of time you know this is complete horseshit, as he’s been a red-ass for most of his career that occasionally the lid pops off of. Watching the replay, you can see where he’ll claim that but you can also see the intent is clear.

Again, while the league can’t actually use the Sedin elbow as precedent, it’s still going to kind of do so. That got five games, and even if you consider this on the same level (this is much more vicious and dangerous), you’d have to increase that suspension to at least what, seven games? That would be Games 1 and 2, which the league generally considers double. And it would almost certainly lead to the Hawks being down 0-2 to whoever they happen to draw, given Keith’s importance to this team.

Of course, this being the NHL and seeing things in a way that even dinosaurs would react to with a “Dude, seriously?”, they will legislate the injury. Coyle didn’t miss a shift, and it all is kind of stemmed from the idiotic high-sticking rule with blood drawn or not. If you take any time to actually think about that rule, you kind of have your normal breathing functions stop for a second trying to comprehend it. The action, it’s recklessness and intent is all that should be considered, not its aftermath. What if Keith’s stick had hit Coyle in the eye? It easily could have. But it didn’t.

Keith’s actions couldn’t have been worse timed, because the NHL has this email controversy brewing where it looks pretty dismissive of head injuries and their causes. So it might just want to start looking not-weak-and-stupid now, and make an example of Keith. Of course, this is easily countered by McDonough clearing his throat, pulling out a sheet that shows the league’s TV ratings when the Hawks are involved in playoff games, and gently tapping on it.

To me, Keith should be looking at a minimum 10 games, because I don’t know how you get more dangerous than swing your stick violently at someone’s head other than removing your skate and trying to go Jack The Ripper. Keith can argue he was slew-footed all he wants, but nothing warrants that retaliation. And as we know, the biggest crime against Keith gets you traded to Dallas, not sticked in the face.

I can’t really improve upon anything that Tim Baffoe at The Score 670 hasn’t already stated. But there is one thing worth accentuating. What possibly can be gained by reinstating Ross? Is the Hogs playoff push so important? It can’t possibly be.

All the Hawks have demonstrated is that they don’t care what their employees do, they just care if they get caught and convicted. Because Ross got caught and as Baffoe said was saved by a “geographical technicality.” The Hawks’ rules appear to be the same as my father had for me when I was a teenager, which was basically don’t end up in prison or the hospital (i.e. don’t do anything that’s going to wake me up). That’s fine for a mildly responsible and intelligent teenager. It is not fine for a professional sports organization where the majority of employees are barely literate wild childs. The Hawks have now told every current and former player you can engage in this sort of thing as long as you’re not totally stupid enough to get caught. That’s a wonderful message. But remember, if you’re a female employee and you had some video in your past that has innuendo of a sexual nature in it, you’re fired so hard you turn inside out.

Suspending Ross for the rest of the season, totally within their rights, would have show the tiniest amount of empathy and understanding. But the Hawks aren’t interested in that as long as the register is oozing cash and the seats are filled. So the next time you hear someone talk about some team or organization needing “a Rocky Wirtz turnaround,” you can laugh as hard as a I do where you puke up a lung. Rocky and McD have proven beyond a doubt this season that they’re the very definition of “born on third.”

-Speaking of spineless and brainless, we have the discovery of the NHL’s emails regarding head injuries, and now you won’t be so embarrassed the next time your drunk uncle sends you something because at least he’s not running a professional sports league. This is why you don’t let these types of cases actually get to the discovery stage, because now you’re basically on the floor.

The NHL can’t cut the check that the NFL did to avoid this sort of thing of course, but now they might have to. That’ll do wonders for the league’s finances I’m sure. It makes you wonder just how shitty of a lawyer Gary Bettman must’ve been, if he’s this helpless. The thing is none of this was really a surprise, we knew how the NHL and its teams generally felt about head injuries (including the one here). As Chris Block once pointed out to me, the night after the Montadors announced a suit against the league for the treatment of Steve (but not the Hawks because they did everything they could for that family to avoid being sued, and that’s why they did it) saw Joel Quenneville praising Andrew Shaw picking a fight in Nashville. How’s that for optics?

What a sea of stupid. It’s a wonder we don’t all drown.