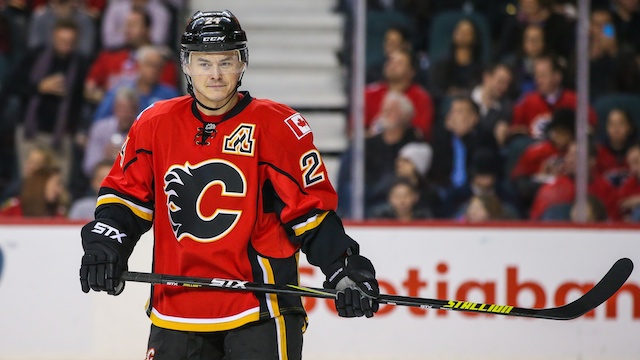 For the Hawks, I’m not exactly sure what the debate is here. Sure, Hudler would be more expensive than Vesey. He probably only takes a one-year deal and then the Hawks would just be in the same predicament next summer with no Vesey to chase. Then again, there’s always some college free agent who is the new hotness on the block. Hell, the Hawks already tried signing one Hobey Baker winner. How’d that go again? But Hudler is a proven NHL scorer.

Vesey has made himself a story by going the free agent route. It’s the uniqueness of it that has distracted people and maybe fooled them into thinking he’s more than he is, because college players don’t go this way very often. Kevin Hayes was another but there’s only a handful of others (at least ones who are actually wanted and not the ones that are simply not signed by the teams that drafted them). What he actually brings is simply going to be less than Hudler, or at least likely to be.

The most you would hope for with Vesey, to be reasonable, is a productive third-liner. Hayes ended up being a second-liner in New York, but he came out of BC and that’s different than Harvard. Maybe Vesey can hop on Toews’s line immediately and be productive (of course we know he won’t because he’ll be in such awe of the raw power that is Richard Panik he’ll scarcely be able to move).

Hudler remains only one year removed from a 30-goal season. He has played with good players before (so he clearly won’t be in awe of Panik). He has been a plus-possession player his entire career. He’s a proven playoff performer. He also wouldn’t come with any bonus headaches that Vesey might. You pay him $1.5-2.0 million for one season. One season where you get a better idea of what Schmaltz and Motte and Hinostroza and Hartman can provide long-term. And you’re the Hawks, so you can always find a veteran who will sign for cheaper to be part of the team (please let it be Patrick Sharp next summer oh god that would be delicious).

Maybe the Hawks see Vesey as a long term piece, and that’s fine. But the Hawks don’t do long-term anymore. With Keith and Seabrook and Crawford all north of 30, and Toews and Hjalmarsson in touching distance, and no Saad or anyone else capable of picking up the torch and carrying the team, the Hawks are in the now. By the time Vesey turns whatever he’s going to turn into, the window is almost certainly shut. Hudler helps in the now, or at least more likely does.

Bottom line is the Hawks, if they’re in any way serious about this season, and you’d have to figure they are, have to end up with one of the two and not a handful of themselves. I just think the better option could be signed right now instead of waiting to see where Vesey wants to go.

-There was some buzz, mostly because there’s nothing else to talk about right now, that the NHL Network released it’s “Top 20 Forwards” list and Kane was top of it and Toews high up in it as well. First off, if you’ve watched NHL Network for any length of time then you know that you shouldn’t give a flying fornication what they have to say. I’d rather hear who The Electric Mayhem rank as the top forwards (full disclosure: I would probably like to hear the Electric Mayhem’s take on a whole host of subjects and wait excitedly for “The Electric Mayhem Lecture Series”).

Perhaps one of the biggest poxes ESPN has foisted upon sports fans in their takeover of sports media is that everything has to be ranked. Everything has to have a number slot. What was once fun bar discussion, mostly just to piss the other person off, has somehow become gospel. It’s as if every subject now is just preparing for a fantasy football draft (which ESPN thinks it actually is). It’s infuriating.

Kane and Toews are among the best forwards in the league. This much we know. Where they slot in exactly is not something that can ever be established. We know who the best player on the planet is, and it’s Crosby. Everything after that is indecipherable. And that’s fine. We can live in gray.