Unwelcome In My Own House – By Cyndi B

This was our guest column last night in the gameday program, sent to us by Cyndi B., @spintheiryarns on Twitter.

The last time I saw Patrick Kane play live was on December 3, 2014. It was a great night, a rivalry game against the Blues. St. Louis had just signed Brodeur, and I was hoping extra hard for Jake Allen to get pulled, so I could say I’d seen Marty Brodeur in net just once. Allen didn’t get pulled, but the PBK line chewed him up and spat him out anyway–three goals in five minutes. Kane had two in under three. The guy sitting next to me was a patronizing tool and insisted on hugging me after every Chicago goal, but it was worth it. There was no feeling quite like being there on a night when Kane was really on, when the crowd was already halfway to its feet every time he touched the puck.

On October 7 this year, when the Blackhawks opened against the Rangers, I was working late and watching a shitty livestream from my desk–nothing new there. Sure, Chicago fell down early and couldn’t make it back up, but it was fun hockey. Clean, evenly matched, fast-paced. I was pleased–except every time the crowd cheered a goal I started crying instead, because I remembered what that felt like and I don’t know how to ever get it back.

I think we can guess what happened in between.

No, we don’t know for sure. We’ve been around the Only Two People Know What Happened merry-go-round a time or twenty since August. It’s a stupid merry-go-round and people really want to stay on it for some reason, no matter how much other people try to explain that the facts of Kane’s guilt or innocence aren’t the problem. No, we’re not gonna know that yes/no answer for sure–but if you want the facts I can tell you plenty about people who have definitely been harmed at a distance by this situation. See, a big chunk of the problem isn’t criminal charges or the lack thereof, the problem is you. The problem is us. Blackhawks fans. Hockey fans. The entire garbage human race.

Actually, I bet that’s exactly why people are clinging to an unanswerable yes/no question. It shuts down discussion of whether and how they themselves are being assholes.

I still follow and enjoy Blackhawks hockey, but I no longer describe myself as a “Blackhawks fan.” If I need to specify I say “Chicago hockey fan.” It’s a tricky distinction to pin down. For one thing, calling myself a “Blackhawks fan” implies I approve of how they’ve behaved as an organization, which I don’t. But it also implies belonging in Blackhawks fandom, and thanks to a vocal majority I no longer feel welcome or safe there.

Until this summer, Blackhawks fans felt like my people. Sure, there was the hugger at the Blues game. The guy teaching his sons to yell at ice girls. The guy who tried to sic his buddies on me because I mentioned on Twitter, without elaboration or judgment, that I don’t like wearing the Blackhawks logo. The guy who–yeah, okay. But I loved the Blackhawks and it made me feel like I was part of something, this whole city and the team at its heart. Despite the Guys Who.

But since August, it seems like Blackhawks fandom is a wall of Guys Who. I can’t trust a single fucking one of you. If women see men as Schrodinger’s Rapist, then Blackhawks fans of any gender are a few rungs down at Schrodinger’s Rape Apologist, just waiting for the chance to share their feelings about “gold-digging hometown bitches” and “respect for the legal process” and “waiting for the facts.” Any gathering of Chicago sports fans feels like a minefield. I miss watching sports in public, but you people are scary. If it isn’t the NO MEANS YES chants at games, people stalking and harassing my friends online, it’s the people claiming “objectivity” like it puts them above everyone else.

There’s no such thing as objectivity or neutrality about this, not now or possibly ever. When you wear your KANE 88 jersey, you may think you’re still saying “I admire this man who is good at hockey,” but what everyone else sees is a shirt saying “I admire this rape suspect.” Rapists see you and feel safer. Rape survivors see you and feel less safe. Even if you personally believe Kane is innocent, public support is loaded in a way it wasn’t before, whether you like it or not.

People will probably get mad that I called them scary and show up on Twitter to hassle me about it. And I have to be grateful, because I’ve still taken miles less shit over this situation than most women I know. It’s fucking exhausting to keep on expressing frustration and have people show up to tell you you’re not actually feeling what you’re feeling, and also shut up you’re spoiling their fun, and back it up with patronizing “logic” that amounts to sticking their fingers in their ears and humming.

Nobody believes your sudden passion for the principles of “innocent until proven guilty,” folks. It might be because you keep trotting the words out to shut up everyone you don’t agree with, and in general assuming the worst of everybody except, conveniently, a man suspected of rape. For three months people have been hanging out in the #Kane hashtag on Twitter, harassing strangers in his defense. You’ve proven by your behavior that when a woman says “I am being hurt” you are the person who says “no you’re not, shut up.” When a woman says “you are hurting me” you are the person who says “I don’t care, deal with it.”

Yes. That kind of person. I am calling you exactly what you think I am calling you. I’m sorry, does that hurt your feelings? Gosh, some people will get outraged over anything. It’s just the Internet. Deal with it or log off.

See, your kind of shit doesn’t stay on the Internet. People have dug up the name, photos, social media accounts of Kane’s accuser and her family. She has been stalked and threatened, people are actively spreading her personal information around, and if you don’t already get why that’s not okay, then there are no words small enough to explain. There is zero reason for throwing this woman’s identity around unless you are trying to incite violence against her.

Congrats–next time your favorite team wins a trophy, it’ll be all thanks to your heroic efforts to make strangers’ lives hell. I hear Wirtz is generous with Cup rings! Maybe you’ll luck out.

It’s become clear that people’s idea of a “good fan” is seriously fucked. I don’t know how you can claim to love a sport, a team, a league, without caring whether their stars are decent humans. But a lot of people with some terrifying priorities seem to think that liking a team obligates me to leave my conscience and critical thinking at the arena doors. What really fucks me up is that this vocal majority didn’t suddenly become assholes overnight. This just gave them the opportunity to burst forth in all their rectal glory.

Right now Twitter is flooded with people going “I told you so, he’s innocent, my behavior is retroactively justified.” So what if Kane isn’t being charged? Even if there was irrefutable proof of his innocence, which this isn’t, even then it wouldn’t excuse one second of the shit that’s been slung over this. You are not a vindicated hero, you’re an ineffectual jerk, and the way you’ve behaved is your own damn fault. This should not be so difficult for so many people to grasp.

Everyone says this all the time, but Christ, people really fucking suck. Given even the chance that Kane did something horrible, fans leapt en masse to defend him from his accuser and from victims of similar violence. The minority willing to believe the victim were on the defensive right from the start. This wasn’t a surprise; it’s the default, expected behavior. That’s fucking horrifying.

Mike Ribeiro and Drew Doughty, accused rapists, are millionaires. Slava Voynov is a hero in Russia because he pissed off Americans; they don’t care why. Patrick Kane’s statue will appear next to Bobby Hull’s one day, and if I’m still playing hockey by then I’ll still walk past them every time I need my skates sharpened. It’d be cheaper and easier for the Blackhawks to put a billboard on Madison instead. ACHIEVEMENT OUTWEIGHS MORALITY, it could say.

Hero worship–in sports or any other field–is a gamble. It shouldn’t be this way. It should be possible to admire people, be inspired by them, without wondering whether they think you’re a human being–or knowing for sure that they don’t. Instead it feels like a ticking time bomb. People brace for the NHL to disappoint them, and it invariably does. Chicago fans fled to the Cubs, only to find Starlin Castro. Others hoped to love the NWHL with a clear conscience, but Kelli Stack and Brianne McLaughlin are human too, and so is the league at their backs.

I wrote a different essay about Kane, back when I was still trying to wring out some optimism. I said “most of the stars you love will not betray you.” I don’t believe that any more. Self-delusion is too much work.

What I wonder is, and I honestly don’t have an answer: if idealizing achievement in others is dangerous, is achievement itself dangerous? Do you have to give up some of your regard for other humans to fully dedicate yourself to excellence?

What happens, over time, that turns one of these humans into the other?

It isn’t an accident or an aberration. It is dirt common.

We have built a machine that eats children and spits out men who can commit public violence again and again, certain they’ll be protected from the consequences. There are boys in AAA hockey, juniors, everywhere, wearing mullets. Wearing #88. In a few years when some of them are getting paid, what kind of person will they think that paycheck lets them be?

We have built a world where what feels like the overwhelming majority are eager to defend a distant hero at the expense of the safety and health of everyone around them. It’s a daily struggle to push back and hope to convince just one person to be just a shred kinder. How can I possibly go on believing that goodness and empathy are the default?

What faith I had in human nature has been ground down and ground down over the last three months by the NHL, and the Blackhawks organization, and people who still call themselves Blackhawks fans. And it’s been extraordinarily rare to see even my remaining shreds of expectations exceeded.

The good news is there‘ll probably be a Panarin-Toews-Hossa line on the ice sometime soon. You gotta have something to look forward to, you know? 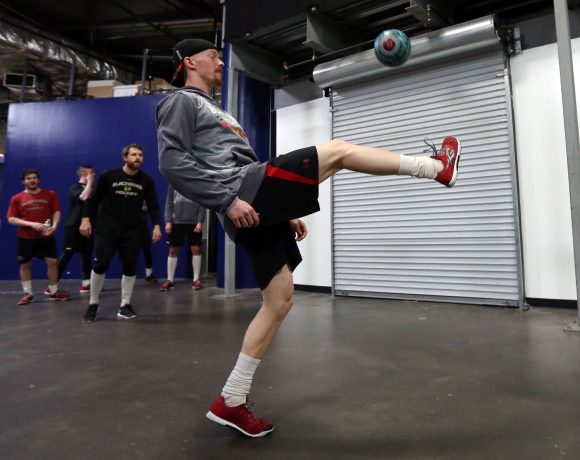