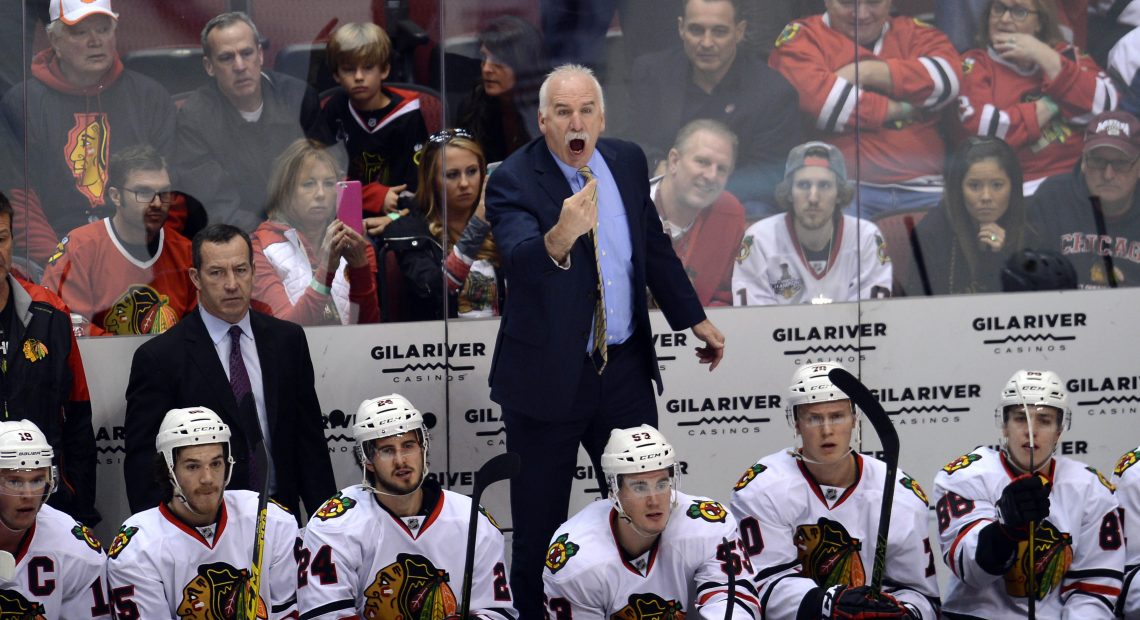 If I’m going to complain about forgetful regular season games throughout this trek, it’s only fair to thoroughly enjoy the ones that are memorable. From the moment Pat Foley pointed out this was an inexperienced crew of officials before the drop of the puck, you had a feeling this game could be a thing. When you add in the history between these two teams when both are competitive and it surely didn’t disappoint.

It’s too bad the Coyotes and Blackhawks don’t play in the same division because there is enough nastiness that it could be the rivalry the league offices openly long for. It was apparent when Brad Richardson was consistently looking for someone to spike behind the play. It was apparent when Andrew Shaw looked to reenact his decapitation of Mike Smith. It was apparent every time Shane Doan opened his mouth and made the same dumb look he’s had since he exited the egg he hatched out of.

Yes folks, these teams do not like each other.

–On the scale of anger, Joel Quenneville certainly surpassed his previous high water mark – which was last achieved in game 1 against St. Louis in 2014 – when Marian Hossa’s first goal was waved off. The coaches will surely have a good laugh tonight recalling the verbal diarrhea that came out of his mouth when that poor official had to skate over to the Hawks bench to explain why they decided to wave off the goal.

–Not Corey Crawford’s greatest outing. Judging by the fancy stats, it’s hard to tell when Arizona possessed the puck for more than 3 seconds at a time. Shane Doan’s goal wasn’t the greatest. Neither was the one Jordan Martinook scored. Buuuuut, we’ve seen this movie plenty of times before and if you thought Crawford was going to give up the game winning goal before Louis Domingue did, you haven’t been paying very close attention.

–From his inability to score or control his stick around the opposition’s face, Brad Richardson will be a St. Louis Blue before it’s all said and done.

–Erik Gustafsson only played 10 minutes tonight. In the frantic pace of the third period, I didn’t notice if he was intentionally short-shifted or if something happened where he was knocked out of the game. Up until that point, it seemed like he was taking his normal shift with Brent Seabrook and I don’t recall him offending anyone’s hockey sensibilities to warrant a benching. Definitely something to watch for in Dallas and moving forward.

–Yes, it’s true Martin Hanzal doesn’t know the proper way to check. The hands up-in-the-air and stick off the ice reeks of someone who either A) was never taught the proper way B) doesn’t care or C) is currently instructed to play this way now.

I’m just not sure it requires a “STOP IT RIGHT HERE” every stoppage in play.

–Andrew Shaw spearheaded another 3-on-1, this time with Marian Hossa and Jonathan Toews and once again was the one to take the shot. In this instance, he didn’t really have much of a choice. Toews and Hossa were so close to one another that the Coyote defensemen could cover both of them in one spot. This left Shaw with a tiny window to pass or a wide open lane to shoot. He definitely made the correct decision.

What you’d rather see happen if you were the Hawks is Jonathan Toews drive the net and forcing the defenseman to stick with him. Then Hossa drops back and creates a passing lane for Shaw with no defender in his path. The puck could go back to him and then you can use your imagination.

Hossa is generally very good at creating passing lanes to ensure there’s an opportunity for him to get the puck. It didn’t happen there. We move on.

–With Hossa energized and Toews healthy, I don’t think there’s another team in the league that can boast a 1-2 scoring punch like the Hawks. Now just imagine if the Hawks acquire a left winger with an ounce of offensive instinct.

–While the Coyotes will likely point to Artemi Panarin’s non penalty in the overtime as the cause of their demise, Anthony Duclair also cannot let Jonathan Toews escape that easily. After the mad scramble in front, the Coyotes were half way to calming the situation. Then Duclair overpursued Toews to the blue line, took a poor angle on him and just like that, Toews was able to shake him and have a wide open lane en route to the game winner.

That’s all it takes.

–Speaking of Toews, my hunch is that he uses his eyes to misdirect where his shot is headed. So many times in his career, he has beaten butterfly goalies with shots along the ice (which kind of defeats the purpose of being a butterfly goalie). The only thing I can think is that he’s looking anywhere but at the goalie’s feet so the goalie has to respect where he’s looking. And in that tiny fraction of time, the puck is already passed them.

Again, that’s all it takes.

–Next up is the Dallas Nills with a chance for the Hawks to go 20 games over .500 and extend their divisional lead to 5 points. Dallas has come out of their malaise a bit and has won three in a row. Should be a good one. Until then.