That’s It! The Case Cracker! Dylan Sikura for Brandon Pirri Because F*ck You 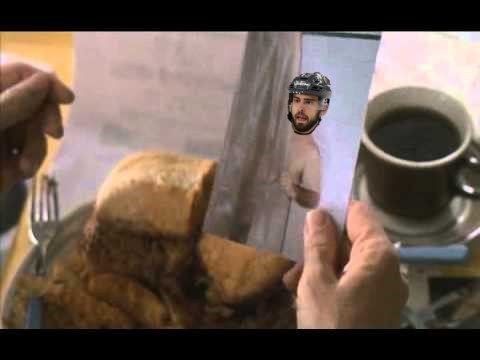 We all have our security blankets. Mine is comparing Alex Nylander to a pile of microwaved dog shit. Perhaps yours is drugs, or alcohol, or comparing us to a pile of microwaved dog shit (see?). Stan Bowman’s is trading for/signing players he had under contract before, presumptively because they’re a known known. So god damn it if we aren’t remotely surprised to see Brandon Pirri coming back to Chicago, because fuck you.

Back when the Hawks were doing the will-he-or-won’t-he with Dylan Sikura, plenty of writers spilled plenty of ink talking about how Sikura fought through confidence issues to become a force at Northeastern. He went from a guy to a Hobey Baker finalist, which as we all know from past Blackhawks Luminary Drew LeBlanc is worth about as much as a two-cherry pull tab with a rug-burned scrotum as the last symbol. Despite being a sixth-round pick, there was always an overabundance of hope for him, especially from our quarters.

And aside from not scoring, Sikura wasn’t bad while he was here. In his only sustained stint here in 2018–19, over 33 games, here’s what he did:

Those are decent peripheral stats for a guy who’s just that: a peripheral player. But much like Beavis, he never scored, which was always a fly in the ointment for Sikura. But for a team whose defense is a straitjacket made entirely of human shit and gristle, having players who can keep possession of the puck is paramount. Sikura could do that, but it obviously wasn’t good enough for a team willing to jam three minutes of John Quenneville in your face in an elimination game in the playoffs. We screamed and moaned for Sikura to get playing time over ANY of the following:

Each of whom got more time than Dylan Sikura over the past two years and each of whom brings between dick and ass to the table compared to Sikura. Though Sikura was never going to be a world beater, he could have been a role player on the third line, and that’s all he ever needed to be. It’s what he’ll become in Vegas to be sure. But instead, we got motherfuckers like John Quenneville skating in meaningful games over here. Tightly run ship, that.

Now what, pray tell, does Brandon Pirri bring to the table that Dylan Sikura couldn’t? He had a nice scoring run in Florida six fucking years ago, with 40 goals over 122 games there. And in 18–19, he scored 12 goals for Vegas. His career CF% is slightly lower than Sikura’s despite spending much more time in the offensive zone. Like Sikura, he’s had a hard time sticking in the NHL.

But Pirri is almost 30 and costs $25k more than Sikura. For a team that’s dry humping the cap, every dollar matters. Pirri is the older, balder, fatter son that the Hawks thought Sikura could be. And he’s been here before, which is apparently good enough.

This is the second time in three years that the Hawks have gone from drooling over the potential of one of their picks to trading him for a police horse’s fully filled diaper, Harju being the other. In both cases, you got the sense that they were in some kind of doghouse despite solid play. With all the hype that surrounded Sikura as he made his way to the Hawks, you’d have thought he’d get more than the 47 total games he got here. What’s frustrating is that other than the whole “not scoring” thing, he didn’t do all that much wrong. Certainly, he did more right than any of the aforementioned palookas who played more than him over the past two years.

Brandon Pirri will shuttle between Rockford and Chicago as he’s done throughout most of his career, while Dylan Sikura goes on to become an even stronger possession player on one of the best possession teams in the league. When he pots 15–20 goals next year, the Hawks will justify the trade as we can’t afford that.

It’s a fart in the wind in the long term. Sikura barely got a shake here, and now he’ll go to a team that’s nothing but guys who barely got a shake. How’s that gone for the rest of the league? But this is the state of things, wherein Bowman tries to win the 2014 Stanley Cup yet again.

The retreads will continue until morale improves.