Milan Lucic – By god he found another home. It’s amazing how many teams are willing to take a chance on a player because they might provide “grit,” the most nebulous and overvalued skill in any sport. Lucic still can’t move, still can’t score, and no one gives a shit about his antics because he’s such a boon on the ice to the opponent. And he’s murdering the Flames’ cap just as he did up the road in EdMo. This guy’s been an albatross for five years. You have to almost be impressed. But hey, maybe after a whistle he can spear a guy in the nuts. That’ll get the Flames up the standings.

Whichever of Keith Tkachuk’s Garbage Sons Is Here – Not that there’s any difference. They all run their mouth and start shit all the time. But when you watch them do it you know this is just an extension of when they would go throw things at homeless people with their other private school friends. They’re just spoiled rich kids who never got told to shut up or got the shit kicked out of them because of who dad was, and got all the best training in hockey because he was rich. You know the Tkachuk’s, they just have a different name.

Not Using The Retros All The Time – The old look at home is great. Then the Flames debuted their retro whites this year, and it’s clearly what they should be wearing all the time. More teams need to learn that having black as a lining or a color, unless it’s a main color of the team–only deadens the look in HD and live. The Hawks only have the stripes on sleeves and waist which is why their jerseys still pop.. Thank god the Flames are going to these full-time next year. Enough with the superfluous piping and stripes and whatnot. 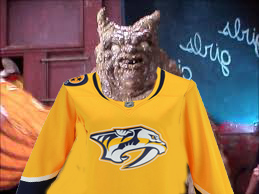 Game #27 – Hawks vs. Predators Douchebag Du Jour: Yet Another On The Pile

You get a lot of people looking the other way on the Nashville Predators, mostly because hockey writers really like to get drunk on Broadway St. and some of them even like country music. Because of that, there’s a piousness among the Preds fanbase, even added to the general piousness of the South, about how their team is built and run.

Make no mistake, the Preds have been as much or more filled with shitbags and fuckheads than any other team. This is a squad that signed Mike Ribeiro to two contracts. It signed Harry Zolnierczyk. It’s one that has Austin Watson. and then used his wife to try and save their ass for employing him. They also have Zac Rinaldo.

While Rinaldo has at least kept his shitbaggery on the ice unlike the others, it’s a whole collection of it. Make no mistake, Rinaldo is a useless turd of a player who has racked up more games in suspensions than goals he’ll ever score. It’s true. He’s only ever been out there to try and intentionally hurt people, and in the dirtiest and cheapest ways possible.

He continues a long tradition of Predators ass-mongers like Jordin Tootoo and Cody McLeod. Somehow the Preds get to skate on having these guys even though the league is doing everything it can to move on from clods like this. What Peter Laviolette wanted with this dungheap when he went to GM David Poile, himself quite the harvester of shit in his career, is anyone’s guess. Lavvy went through this horseshit in Philadelphia with Rinaldo, and must’ve come away impressed somehow.

Especially in a division that doesn’t contain any of this tripe, it’s a real wonder why the Predators think they need this. The Jets aren’t going to beat on them in the playoffs, and if that’s why they think they lost last year they’re already fucked. the Wild aren’t. The Stars aren’t. The Avs aren’t. The Preds seem to be preparing for a fight that’s never coming.

Next time anyone tries to tell you the Preds are on the cutting edge of the NHL, you just remember all of this.