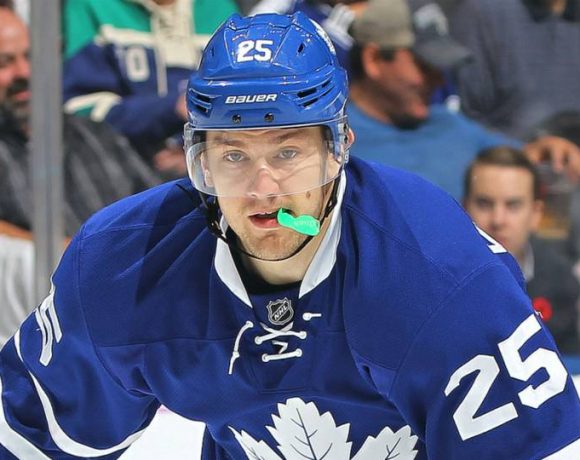 If the rumors are true and not only has Artem Anisimov been asked to submit the list of 10 teams he will accept a trade to, but the Hawks are able and inclined to act on it, we know their coach, vociferous fans, media, and maybe some woodland creatures are going to stamp their feet, wave their arms, and declare loudly, “But who I say, what squire will we find to play the part of ‘Annette Frontpresence’? Wherever shall we locate such a burly fellow to blot out the sun, entrench himself in the depths of the slot, and rabble-rouse our worthy and formidable foes?! WHERE I SAY?! ANSWER ME HEATHENS!!!”

Well fear not, members of the court. There is a solution out there. And we know the Hawks love anyone named “van Riemdsyk.” The only fear is that Q will think it’s Trevor again and play him on defense, and way too much. Hell, this was the same team and fanbase that thought Trevor Daley was the same thing as Johnny Oduya because they were both black, remember.

You don’t have to do much to sell JVR to anyone. 65 goals the past two seasons, when the Leafs were finally worth a shit. He’s scored at a 25+ goal pace for six seasons now, though three seasons ago only played 40 games due to injury. If it’s metrics you want, and I know that you do, he was an absolutely dominant possession player last year in T.O, with a +7.4 relative Corsi on a Mike Babcock team, which is not easy to do. That was his second +7% or better relative-Corsi season in the past three.

The caveat here is that he did that while playing with Tyler Bozak and Connor Brown, which basically was the Leafs third line. Which meant cherry zone-starts, as Nazem Kadri and his non-stop yap were used as a checking line. JVR started 62% of his shifts start in the offensive zone, after 57% the year before. It also meant that JVR saw some of the easier competition among Leafs forwards, though not the easiest.

Another one is that JVR’s goal-total this season was “inflated” by 11 power play goals, though it’s not like those count for less. The Leafs’ power play worked a lot better than the Hawks, but you’d like to think with the right defensive signing/trade the Hawks’ PP could unfuck itself. But then again we’ve thought that a lot and we’re up to a decade of Duncan Keith shots into shinpads and Patrick Kane doing a James Harden impression for the truly deranged. JVR’s 14.5 SH% was a career-high, and you’re right to be somewhat leery of that, but it’s not wholly out of line with his career 11.5%. If he had managed only the latter number last year that still would have meant 28 goals, and the Hawks could use 28 goals (Yale could use an international airport…).

You can see sticking JVR on the left side of Kane and Schmaltz, having him clear some space for their speed and handling, and banging home loose change and rebounds until his heart’s content. You could see him as a Saad replacement if Saad has to be dealt for Justin Faulk or something similar. The appeal is quite obvious.

So the question becomes cost. Well, it just so happens another winger with a big man’s game went on the market last year after a SH%-spiked career season, and his name was Timothy Jimothy. He got $5.75 million for forever, and he was one year older than JVR is now at the time. Now, you and I may blech at giving JVR seven or eight years until he’s 36 or 37. But as we’ve discussed many, many times, that might not really matter to Stan Bowman because the likelihood of him still being GM then is nearly nil (not Jim Nill). If he were still here in eight years that would be a 17-year stretch as GM, which is basically unheard of. Either the Hawks suck again and he’s out on his ass, or they spasm one or two more good seasons out of this group before returning to the depths and he’s fired then. So if JVR has been identified as a “must have,” then the Hawks are going to toss whatever years at him and not even worry about it because hey, that’ll be someone else’s problem and dumping it off on someone else is the American dream.

So really, JVR shouldn’t come in at anything more than $6 million, though he’s probably asking for $7M and maybe some team is dumb enough to give it to him If he can be had for somewhere between $5-$6M, you probably pull the trigger. A top six of Top Cat-Toews-Saad and then JVR-Schmalt-Kane looks pretty tasty from where where I’m standing.