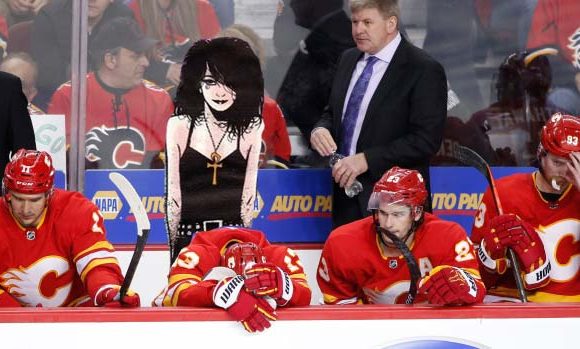 How do you say goodbye to something you barely knew was there?

Sure, Calgary was the West’s #1 seed, and you probably treat that revelation with an, ‘Oh…riiiight,” response. You knew it, somewhere in the back of your mind, and then forgot it, much like whether or not there was cream cheese in the fridge. You’re just as likely to buy more and then come home to realize you have even more cream cheese you’re probably not ever going to get to. And that’s the Flames. They’re in the fridge, but you always forget, and they’re just in the door until they go green.

Honestly, Calgary is the Canadian team that makes up the numbers. They’re not hilariously run and bad like the Senators or Canucks or Oilers. Their fans don’t make the spectacle of themselves that Toronto’s or Winnipeg’s do. They’re not constantly crying for attention and think they invented the sport like Montreal. They’re just there, kicking the horseshit around their town and not really bothered. Oh sure, they’ll have an arena debate every few months just to remind everyone they’re still alive and maybe act like a big boy. But that’s about it.

Oh, how they tried to make their goalie failures everyone’s problem. But they didn’t do it as well as San Jose, and everyone was like, “No, we already have a contender with no goalie in the fridge, thanks.” They tried to claim that Matthew Tkachuk’s upcoming restricted free agency was a real problem, but the Leafs had that market cornered. And they tried to tell you how good Sean Monahan was…until he died right before the first round. Sky point. So they’re left to try and scream about how Mikael Backlund is the most underrated player in the league, and you look at people spending time talking about Mikael Backlund and you can’t help but wonder who hurt them in life.

There was the Mark Giordano Lifetime Appreciation Tour, and his fellow Norris finalists all might be done in the first round. It’s a cursed award. They retired Jarome Iginla’s number. It was an emotional night for those in Calgary to praise their team’s greatest ever player and an emotional night for everyone outside of Calgary how such a gift of a player could toil in a city that was such an afterthought for so long. Connor McDavid watched the ceremony and wept, knowing there was no way his career would go any differently. And he probably won’t even get a couple gold medals to make it better. Enjoy that trade to Carolina when you’re 35, Run CMD. But that’s not why you called.

The Flames were actually entertaining for a while. They spent the first part of the year just not playing defense, and then wondering why Mike Smith couldn’t bail them out. Recurring theme with Bill Peters teams. Then they seemed to figure it out with either Big Save Dave or Smith, except the former went back to being a goalie you’d never heard of and Mike Smith was Mike Smith.

Then Peters, in his first playoff series as coach, showed up with a plan that consisted of, “Uh, do some shit?” It didn’t contain any notes on how to contain Nathan MacKinnon, who proceeded to mirror Nene when he made Joakim Noah’s Defensive Player Of The Year Award look like the dumbest possible decision in NBA history. Nene! You go ahead and accept that Norris there, Gio, though some one is going to have to hold it for you while you’re in the burn unit. Also, Nate went that way.

Of course, the most interesting thing about the Flames was that after all the kvetching about Smith or from Smith, he was clearly the Flames best player in the 1st round. Perhaps they were just too surprised and kept letting the Avs through to barrage Smith to make sure what they were seeing was real. “No, this can’t be right, not after the last six months. Here, J.T., why don’t you go on through and try again and we’ll sort this out.”

Peters answer for all this was…well, we’re still waiting for an answer. Always has to be encouraging for a team and organization when your coach throws his hands in the air right after his team is eliminated when asked what happened. It’s not like his job to know or anything. This is exclusive to hockey coaches. Imagine an NBA coach trying this. Steven A. Smith would turn puce. But hey, Bill is a good Canadian boy so it can’t be his fault he doesn’t know. Hockey’s weird!

What happened was his defense is slow, and while his top six is quick, it’s not MacKinnon quick. And Monahan died. Other than that, everything is fine.

And this is the team they’ll basically have going forward, partially thanks to James Neal having four years left on his deal. Stationary shooters age so well in a speeding-up league, it’s a wonder this didn’t work. Tkachuk will gobble up most of the space, and if he’s anything like his old man will spend the rest of the time gobbling up whatever is on the table in front of him. The Dreaded Laramie is going to become The Bloated Laramie.

So toodles, Flames. You were here, I guess. No one’s sure why. And you still will be in the seasons to come. And no one will know why then, either. It’s the role you play. Sadly, you’re basically the Oilers or Islanders but only a quarter of the faded glory. Nice threads, though. You’ll always have the Oilers to laugh at, and the Canucks, in your weird little Western Canada cabal. It’s probably going to suck when Seattle comes in and is immediately better than all of you. Probably should have done something anyone can remember. Maybe you can get Daymon Langkow to punch Iggy on his lawn again.