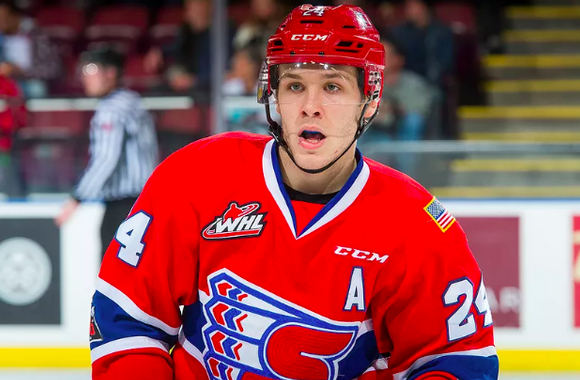 Essentially, what we wrote here about Quinton Hughes at Michigan we could copy and paste for Smith out of the WHL. A tad undersized, but a dynamic offensive force from the blue line who exploded in his second year in the Western Hockey League.

After a 32-point season in his debut with Spokane, Smith went nuclear last year with 73 points in 69 games. That made him the second leading scorer as a d-man in the league, behind David Quenneville and ahead of one Henri Jokiharju. I suppose if I’m advocating having Jokiharju go straight to the NHL, then you could make the same case for Smith.

Smith doesn’t have the international experience that Jokiharju does, and hey, it’s a bitch being Canadian that way. Smith is also going to have to overcome the stigma of his size. He’s listed at 5-10 and 176, and that’s probably being generous. While the NHL is skewing smaller and faster, there are times when d-men have to be sturdy and strong and Smith is going to have to prove he can do so in those moments.

What Smith has that you can’t teach is being a plus-plus skater and instincts. Smith’s vision is already at a higher level than he plays according to scouting reports, and projects as a #1 power play QB in the not too distant future. He already has a great sense of when we can skate himself out of trouble, which is most times given his grace, and when he has to make a pass. He’s also not afraid to step up into the rush, or above his blue line to break up play quickly, which is a skill the Hawks prioritize heavily.

Unlike some others we’ve previewed, Smith is likely to be around when the Hawks pick. He’s been projected as low as #17 in some mock drafts and as high as #7 in others. The Hawks could conceivably drop down a few spots and get him and gobble up another pick if one team was desperate to move up. Again, the Hawks are basically short everywhere in the pipeline with only Jokiharju and Mitchell as d-men they’re counting on to make an impact at the NHL-level. Smith looks like he could be another.