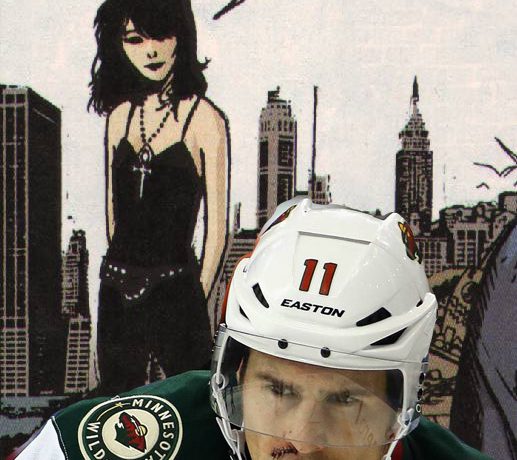 It used to be tradition that playoff exits were complimented by eulogies on Puck Daddy. But with Wysh off in the Connecticut hinterlands and those who remain at Yahoo! being a bunch of Canadian giblets who take things far too seriously (and Lambert being angry and definitely not a Bruins fan), we don’t need them to do what we do best. So fuck it. We’ll eulogize all 15 teams that will eventually fall. Now, a rite of spring…

Actually, that picture should probably portray Zach Parise as Death, because today he turned a new trick by expanding on getting his coaches fired by getting his GM fired, and a big reason is the contract Parise signed. Good stuff, that.

Whereas there was joy in kicking dirt all over the bloated corpses of the Ducks and Kings, sending the Wild out with a quiet word is really just a reflex of the spring. About the only thing they provided was quality #BoudreauFace during these playoffs, as it quickly became obvious to him and everyone else his team was just ridiculously overmatched. If any player turned around on the bench and saw the expression of their coach it would have been an upset if they hopped over the boards ever again.

But this is what you sign up for when you have Boudreau behind the bench. Since he left the Capitals, his Ducks and Wild teams have these great seasons that take place almost entirely in the dark. You check the standings every few weeks and your reaction is always, “Huh, how’d they get there?” Because you wouldn’t ever choose to watch them. And then you go on about your life only to repeat the process a few weeks later. Then, when the playoffs start and you really pay attention, you really wonder how they hell they finished where they did, at least you do for the six minutes the Wild are around in the playoffs.

Once again, Devan Dubnyk was the second-best goalie in a series, just as he was in ’15, and ’16, and last year. And you have to hand it to him, because he’s been the second-best goalie in a series to a wild variety of other goalies, from one of the league’s best (Crawford) to genuinely terrible goalies (Niemi and Lehtonen) to absolute basketcases (Jake Allen) and now a young one in his first playoff series (Hellebuyck). He is wonderful talent enhancement.

It was another year of writers marveling at what a defensive wizard Mikko Koivu is in the dregs of February, and then watching him get turned into dog food in the playoffs. A 41% Corsi for the series, reminding us once again he’s a million years old and the Wild have yet to produce a center that’s really any better than him. The State of Hockey is one of paralysis. If Beckett had been around now he would have written a sequel to Godot about the Wild and waiting for anything or anyone of consequence to happen.

It’s really hard to stress just how much the Wild, a 100-point team somehow, got their ass handed to them in five games. No player achieved a positive possession rating over five games, and this was to a franchise that had never won a playoff series before. This might not even count, considering the cannon fodder the Wild were. It’s like counting something in the Home Run Derby as your first major league hit.

And the thing is, the Wild aren’t going to change. They can’t. They have to find the money to pay Dumba and Zucker, and that will be that. They won’t have any flexibility to do anything else, and they’ll roll out the exact same team next year that will amass around 100 points thanks to Gabby’s “Go get ’em, scouts!” system that sees them play really hard when no one cares. And we’ll get more and more articles of “Boudreau does it again! What a magician!”

And then April rolls around, they’ll face a good team that cares again and they’ll get walloped. We’ll get shots of Boudreau behind the bench, the definition of “out of answers,” and he’ll basically be the same shade as Grimace (and shape) by Game 4. His career playoff winning percentage is .478. But hey, he talks to the media and is kind of adorable, so let’s just ignore the fact that he’s almost certainly a moron.

There’s a lesson to the Wild. Constancy. Some teams just have to fill out the numbers, to perform the same cycle over and over to make the ones who change stand out. They’re the backup singers doing the same dance routine every night while Jagger is out front. They help hit the harmonies for the rest of the league, and then fade into the background when the important notes are sung. They are water carriers. Good things there’s a lot of it in Minnesota.