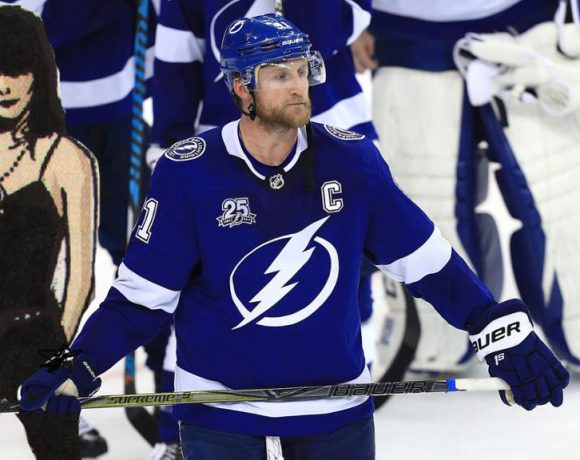 You Get What Anyone Gets: Saying Goodbye To The Tampa Bay Lightning

Before the season, it was generally agreed the Lightning were the best team in the league. And really, they were. Somehow they were able to overcome the fact that Dan Girardi turned into amassed lizards like five years ago, Anton Stralman has looked like confused villain #3 in any Bond film since last season, and Braydon Coburn still has windburn from the 2010 Final. They blended kids and rookies into their already stacked lineup seamlessly, the way Jon Cooper blends peanut butter and candle wax seamlessly into his Thursday nights.

And yet pretty much from the first month on, everyone tried to find a different team to claim the favorite. We all wavered from Boston (hilarious) to Nashville to Winnipeg to Vegas to even saying fuck it the Penguins are just going to win again BECAUSE. The Lightning remained as steadfast as ever, they just couldn’t get anyone to care other than the retirees who populate the place and the extras from Magic Mike who no one told filming was over. They were the reserve prom date who had to wait for everyone else’s delusions of grandeur to pass.

As good as this team is, did it ever have any swagger? Or was that sucked up all by Cooper as he sauntered into a USF bar on a Tuesday? Did they ever look like they believed they could beat anyone and everyone? Was there ever an assuredness? It sure never seemed like it. There was no style or panache to it. It was just results. It was basically hockey Pearl Jam.

It looked like they might have captured it getting out of their division in the playoffs. But that should have been the first clue. That division. 17-5-2 against everyone who wasn’t the Bruins, which contained five teams that looked like something an untrained puppy left to its own devices for hours had gone through. Still, it should have been more.

And then the Caps showed up and said, “Hey wait a fucking minute, why is everyone out-thinking themselves here? Girardi and Coburn suck and we’re going to show everyone.” And they did. By Game 7 both looked like David Cross’ burn victim from Mr. Show. Sometimes it is as simple as it looks.

You know what might have helped? If Steven Stamkos could have managed an even-strength goal at any point in the last series, or more than one in the whole playoffs. Still, you have to say it goes nicely with his no goals in the ’15 Final at all. Quite the set. Hell of a Rick Nash impression you’ve got there, Stammer. Guess you weren’t alone. Nikita Kucherov couldn’t manage any either. So nice how you’re keeping each other company. #LinematesTilWeDie

They weren’t alone in Chateau Where The Fuck Were You? Victor Hedman spent all but one game against the Caps making love to a lawn mower, which didn’t exactly counteract the performance art for the blind that Girardi, Stralman, and Coburn were putting forth. The only d-man who looked like he wanted it was Mikhail Sergachev, and he could barely find 10 minutes per night while his coach was scrolling through Early2BedShop.com on his phone. I guess if you’re traded for Jonathan Drouin you can’t be surprised if they still treat you like Jonathan Drouin out of habit. You can’t expect a hockey coach to notice you’re a different guy.

But it’s ok, Steve Yzerman is a genius because he’s the first GM to figure out that Florida’s lack of an income tax could be like, an advantage? We’ll ignore he’s the reason that his blue line that was half-comprised by Tweedle Dumb, Tweedle Slow, and Tweedle Old was all his doing. And hey, they’re all back next year! Only J.T. Miller needs to be re-upped, just as soon as they can locate him with his other linemates after the conference final. They’re all up after that, which is good because Kucherov, Point, and Gourde are going to suck up the rest. Dance that dance, Stevie Y. Everyone will still love you. (And frankly, the fact that he could see taking the Detroit job was an utterly hopeless task alone makes him smarter than 80% of the GMs out there).

So so long, Tampa. No one has made being this good this meh since…well who knows, because all those teams are forgotten now. Much like the whole area. Miami at least has nightlife. Orlando has Disney. Jacksonville has crack. Tampa has…hang on I’ll get this. Probably not a good sign when the only movie that takes place there, the aforementioned Magic Mike, is all about how everyone wants to get the fuck out of there, huh?